One Faithful Harp Shall Praise Thee: The Minstrel Boy

Eight years ago I was in the process of returning home from Iraq spending my last couple of days in country before flying out to Kuwait and then the United States. I was already in a rather melancholy state knowing that the Chaplain incoming higher headquarters had turned off my relief for Al Anbar Province after I had paved the way for him with all of the teams of advisers that I had worked with during my time serving them. My relief a personal friend was diverted to the Army advisers with a different Iraqi Division in the north of the country. I felt that the incoming senior chaplain had betrayed and abandoned the men that I worked so hard to care for. Later I heard that he had disregarded my heavily detailed after action reports and told at least one senior chaplain that he “had heard that I was out there but didn’t know if I  had done anything.”

It was at that point that I realized that you could do your job and sacrifice yourself to complete a mission only to have someone with their own agenda do what they could to discredit you.  I felt betrayed and still do. I was asked by my therapist about this and frankly, though I have tried to forgive the feelings always come back, especially this time of year.

Where the senior Chaplain that I worked for did all that he could to support my team’s mission and see that we were properly recognized at Multi-National Corps Iraq in Baghdad his successor dismissed our work. It was the first time in my Navy career that I had experienced that.  I think it was the fact that I worked for a non-traditional billet working for an Army led joint command outside the normal Navy-Marine Corps chain was a big part of this. Inter-service rivalries and the disdain of those bound by conventional thinking are not new and those that have done such non-conventional work have frequently been treated in a similar manner.

The minstrel boy to the war is gone,
In the ranks of death ye will find him;
His father’s sword he hath girded on,
And his wild harp slung behind him;
“Land of Song!” said the warrior bard,
“Tho’ all the world betray thee,
One sword, at least, thy rights shall guard,
One faithful harp shall praise thee!”

The Minstrel fell! But the foeman’s chain
Could not bring his proud soul under;
The harp he lov’d ne’er spoke again,
For he tore its chords asunder;
And said “No chains shall sully thee,
Thou soul of love and bravery!
Thy songs were made for the pure and free
They shall never sound in slavery!”

The Minstrel Boy will return we pray
When we hear the news we all will cheer it,
The minstrel boy will return one day,
Torn perhaps in body, not in spirit.
Then may he play on his harp in peace,
In a world such as heaven intended,
For all the bitterness of man must cease,
And ev’ry battle must be ended.

I think that is why the line in the song “Tho’ all the world betray thee” means so much to me and a big reason why the song touches me in the way it does. It is a song of men changed by war.

Looking back there are some songs which are particularly meaningful to me after my time in Iraq that send a chill up my spine when I hear them. One of these is the patriotic Irish song The Minstrel Boy written by Thomas Moore while a student in honor of friends killed in the Irish Rebellion of 1798.  The song was very popular among soldiers of Irish descent in the American Civil War as well as soldiers fighting in Irish Regiments in World War One and World War Two. 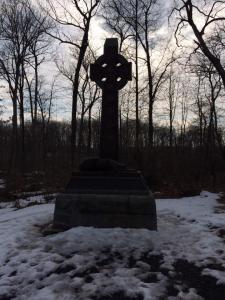 The song is powerful when you hear it for it speaks of the reality of war, war that changes those, even those that return home are not unchanged by it.  It speaks of the sacrifices required by those that go to war and even the effects on the community, the loss of young people.  The final verse added by an anonymous author during the American Civil War in a sense is a prayer, a prayer of return as well as reconciliation. It has been recorded a number of times including an instrumental during the film Blackhawk Down. Another rendition is in the television mini-series Rough Riders about the 1st U.S. Volunteer Cavalry at the Battle of San Juan Hill and one in the movie Gettysburg as Father Corby blesses the Irish Brigade.

My life has been changed and faith challenged. When I went to Iraq I still maintained a sense of idealism.   After Iraq and having to deal with PTSD and a psychological, spiritual and physical breakdown as well as a profound sense of abandonment by some senior chaplains, my former church and even God I am a different person. My faith which had been shattered to the point of being a practical agnostic for nearly two years has returned and even now eight years later still I struggle with belief, unbelief and faith in general, but I don’t think that is a bad thing. I believe that if we are not changed by what God allows or by what life brings I don’t think that we grow as human beings, or for that matter are of much use to anyone else. As a Priest I wonder if I could work in the environment that I work without having gone through what I did.

I see many of the “minstrel boys” and girls of our era and having also been to war and come back changed the last lines of the final verse is a prayer that I echo. One of the versions that I particularly like is the one sung in the Star Trek the Next Generation episode “The Wounded.” While it is only the first verse it deals with the lives of two officers whose lives are forever changed by war.

This is dedicated to all those who have served who have gone through the pain of war and return until war shall be no more, but until then at least one faithful harp will praise thee…