Predators of the High Seas: The U-Boat Type IX

As I mentioned yesterday I am kind of taking some time away from politics and all the other stuff I could write about to go back to one of my passions, the great warships of history. I am busy at work and I am continuing to work on my Civil War texts but I’m not ready to post any of the new material from those just yet. Last night I wrote about the U-Boat Type VII, the most numerous, and one of the most successful type of submarines ever produced. Today, an older article dredged up from my archives about the U-Boat Type IX, which was one of the most successful types of submarines ever built. This is a tribute to them and their brave crews, who though fighting for an evil cause demonstrated bravery and courage even when the odds were stacked against them, most of who never saw home again. 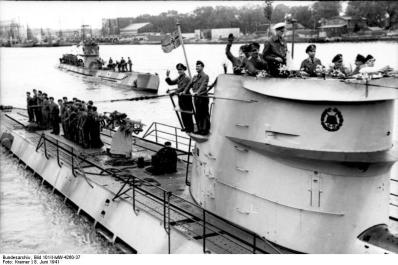 U-123 returning from patrol

As the Kriegsmarine began its expansion in the mid-1930s the new U-Boat arm developed several types of submarines. The Type IX class was designed in 1935-36 as a long range attack boat and was larger had a greater range and were more heavily armed than the more numerous Type VII boats. The Kreigsmarine designers envisioned a submarine capable of operating far from German bases for extended periods of time. The design of these boats was derived from the two boat Type 1 class and incorporated lessons learned from that class. 283 boats of the type were constructed between 1937 and 1944 and the Kriegsmarine continuously sought to improve the type which resulted in five distinct models within the class.

Type IXA The first group referred to as the Type IXA or simply the Type IX was comprised of 8 boats built by AG Weser of Bremen. Ordered in 1936 the group was part of the Kriegsmarine’s Plan Z rearmament plan which began when the Nazi Government announced that it would no longer abide by the Treaty of Versailles. The initial 8 boats had a 1032 ton standard displacement were 251 feet long and were armed with six 21” torpedo tubes with 22 torpedoes. They had a 105mm deck gun with 110 rounds as well as a 37mm and 20mm anti-aircraft gun. They were the first German submarines equipped with a double hull which increased survivability and seaworthiness. They were powered on the surface by two MAN M9V40/46 supercharged 9-cylinder diesel engines that produced 4,400 shp as well as two SSW GU345/34 double-acting electric motors for underwater operations. As in all diesel-electric boats the diesels were used to recharge the batteries for the electric motors while the boat was operating on the surface. They had a maximum speed of 18.2 knots on the surface and a range of 22,354 miles at 10 knots. Underwater they had a maximum speed of 7.7 knots and range of 166 miles at 4 knots. The official maximum diving depth was 230 meters or 750 feet. Of the 8 boats of this type 6 were sunk during combat operations and two scuttled at the end of the war by their crews to prevent their capture by the Allies. The most successful of the Type IXA boats was the U-37 was the most successful boat of the type sinking 53 merchant ships for a total of 200,124 tons as well as two warships, the Sloop HMS Penzance and French Submarine Q-182. 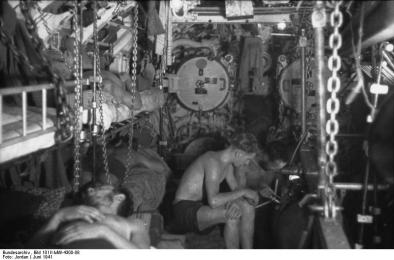 Crew members of U-107 in Torpedo Room

Type IXB The next group was the IXB of which 14 boats were built by AG Weser Bremen. This was the most successful class of U-boats, or for that matter any class of submarines based on tonnage sunk per boat during the Second World War. Each of these ships sank over 100,000 tons of Allied shipping. They were slightly larger than the IXA boats and had a significantly longer operational range of 24,600 miles on the surface at 10 knots. The U-107 of this class had the most successful war patrol of any U-Boat in the war sinking nearly 100,000 tons of Allied shipping off Freetown Sierra Leone while U-103 sank over 237,000 tons of Allied shipping during 11 war patrols over the course of 4 years. These boats were involved in Operation Drumbeat off the coast of the United States in early 1942. 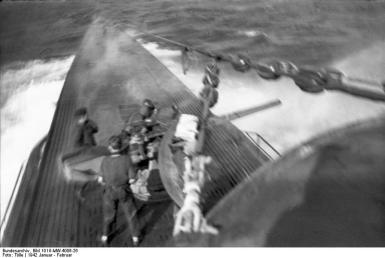 Type IXC The Type IXC was a further improvement of the type with additional fuel capacity and longer range. They displaced 1120 tons and 54 of the boats were commissioned of which 19 were equipped as minelayers with a capacity of 44 TMA or 66 TMB mines. The boats were built by AG Weser Bremen, Seebeckwerft Bremen and Deutsche Werft Hamburg. The U-505 of this type is the only surviving intact Type IX and was captured by a boarding team from the Escort Carrier USS Guadalcanal on June 4th 1944. Her capture was kept secret from the Germans and her crew kept as POWs in a separate POW Camp. The story of the crew and their encounter with the game of baseball is recorded in Gary Moore’s book, Playing with the Enemy: A Baseball Prodigy, a World at War, and a Field of Broken Dreams. The book is being turned into a movie entitled Playing with the Enemy which is scheduled to be released in 2011. She is preserved at the Museum of Science and Industry in Chicago. 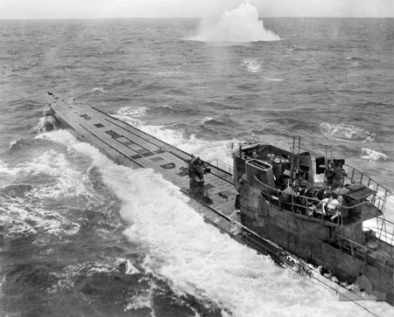 U-848 under attack by USN Aircraft

Type IXC/40 This was a further refinement of the IXC with slightly greater range and surface speed. It was the most numerous type of the class built with 87 being built by AG Weser Bremen, Seebeckwerft Bremen and Deutsche Werft Hamburg. The remains of the U-534 of the class are displayed at Woodside Ferry Terminal in Birkenhead England after being raised from the North Sea in 1986. 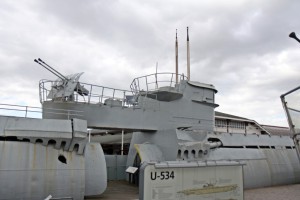 Type IXD The final type in the Type IX Series was the Type IXD. This was a significantly larger boat than the others in the class 287 feet long with a standard displacement of 1610 tons. They were unique in that they had two sets of diesel engines, one for cruising and the other for high speed runs and battery recharge. There were three variants within the type, the IXD1 which were all converted to transport use due to problems with their engines, the most numerous variant the IXD2 and the IXD42 which had greater horsepower. Thirty Type IXs were commissioned with a further six Type IXD42s which were ordered with only one commissioned by the end of the war. 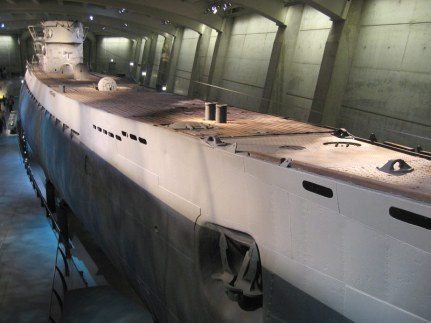 During the war surviving boats would receive increased anti-aircraft armament, the Schnorkel device which allowed them to operate on diesel power while submerged as well as better electronics and detection devices. Most of the boats which survived the war were scuttled by the Allies in Operation Deadlight. The U-511 was sold to Japan in 1943 and U-862 taken over by the Japanese after the German Surrender in May 1945. Both survived the war and were scuttled by the Allies. U-1231 was taken over by the Soviet Navy and served as the B-26 after the war.

The sailors of these U-Boats like all submarine sailors endured many hardships and during the war approximately 75% of the 40,000 U-Boat sailors never returned from patrol, forever interred in the deep with their proud boats.