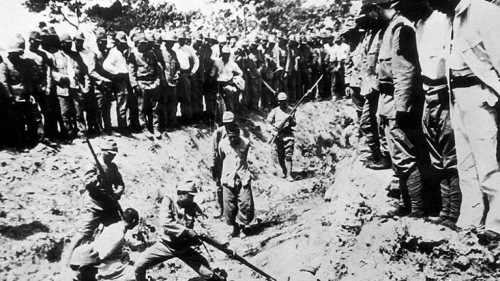 Just a few housekeeping notes today. I have been busy at work with my ethics class and doing more writing on my various Gettysburg and Civil War texts. Likewise I have been paying attention to things going on in the United States and the world. I will be writing some about the most current events, but I will also be doing some writing about the Rape of Nanking as my article on it has been attracting some attention, especially from Japanese deniers of a well documented war crime and crime against humanity. Truthfully the Japanese deniers are no better than the deniers of the Holocaust, or the defenders of slavery in the American South, or the genocide committed against Native Americans by European colonists and our own American ancestors.

Likewise I plan on posting some of my newest material from A Great War in an Age of Revolutionary Change as well as re-posting some articles from deep within the vault. I am going to be speaking Saturday at the Morehead Pride celebration and I will post something about that over the weekend too.

Today was the last day for my current group of students in my ethics elective at the Staff College. As always, after the teaching and student presentations are done I show the film Conspiracy which is a dramatization of the Wansee Conference which set into motion the plan for Hitler’s Final Solution against the Jews. I always find the film chilling and use it to show that even well meaning and basically moral people can come to support, even reluctantly, evil plans. As I always tell my students, the one constant in history are people, and human nature never changes.

So anyway, until tomorrow.