The Battle of Leyte Gulf Part Three: Slaughter at Surigao 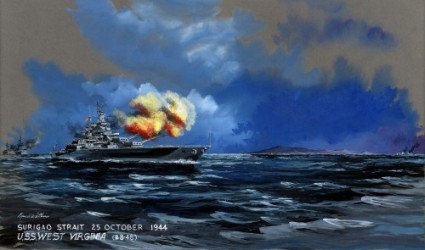 I am still taking some time off from writing about the Presidential race and so today I am posting the third article of a series on the Battle of Leyte Gulf. This article discusses the Battle of Surigao Strait which ended in the near annihilation of most of the of the Japanese Southern Force. The battle was the last ever where battleships engaged each other in a surface action. 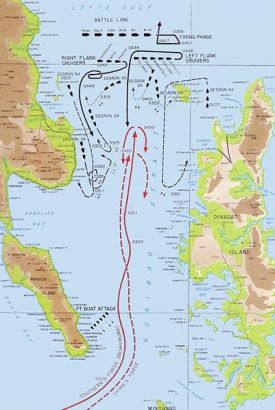 The two task groups of the Japanese Southern Force passed the daylight hours of 24 October relatively unscathed despite an air attack that caused minor damage. The group commanded by Vice Admiral Shoji Nishimura comprised of the elderly Battleships Yamashiro and Fuso the Heavy Cruiser Mogami and four destroyers was leading the charge and was followed by that commanded by Vice Admiral Kiyohide Shima with the Heavy Cruisers Nachi and Ashigara, Light Cruiser Abukuma and four destroyers.

The mission of these two groups which were unable to coordinate their actions due to orders to maintain strict radio silence was to fight their way through the Surigao Strait to assist the Central Force in destroying the US invasion force in Leyte Gulf.  The mission was for all practical purposes a suicide mission, a naval “Charge of the Light Brigade” as they sailed into the Valley of Death against the Battle Line of the US 7th Fleet. 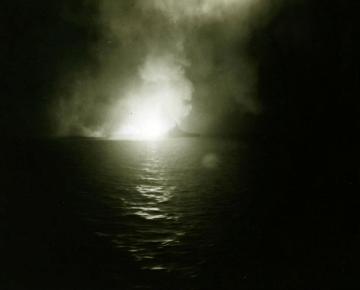 The Japanese Battleships had spent the majority of the war in home waters and had seen little action.  They had not been part of any of the great Japanese victories in 1941 and 1942 and they had not been blooded in the Solomons.  Instead the two elderly battlewagons passed the war conducting training in the inland sea.  They were no longer first line ships but the Japanese were desperate.  During the afternoon Admiral Nishimura received an accurate report from one of Mogami’s scout planes telling him exactly what he was up against yet he pushed on in the manner of a Samurai. 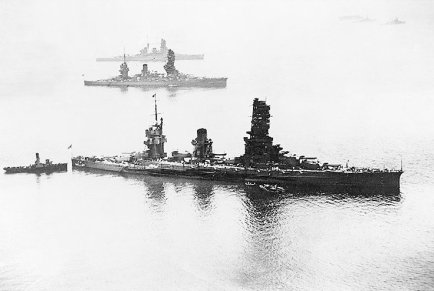 Facing him was a force built around the 6 old Battleships of Vice Admiral Jesse Oldendorf’s 7th Fleet Battle Line.  The Americans heavily outnumbered the Japanese, the Battleships West Virginia, California and Tennessee were the heart of the force. Fully modernized after Pearl Harbor they no longer resembled the ships that they were before the war. Equipped with the latest Mark 8 Fire Control radar they had the ability to put their 16” and 14” shells on target at ranges farther than anything that the Japanese could counter.  Joined by the less fully modernized Maryland, Mississippi and Pennsylvania, 4 Heavy Cruisers, 4 Light Cruisers, 28 Destroyers and 39 PT Boats the outnumbered the combined Japanese forces with sixteen 16” and forty eight 14” guns to twenty 14” guns on the antiquated Yamashiro and Fuso.  The disparity in lesser guns was just as stark, thirty five against twenty six 8” guns, and fifty one 6” guns against six 5.5 inch guns.  This massive imbalance didn’t count the nearly one hundred fifty 5” guns on the US destroyers and as well as nearly 200 torpedo tubes. 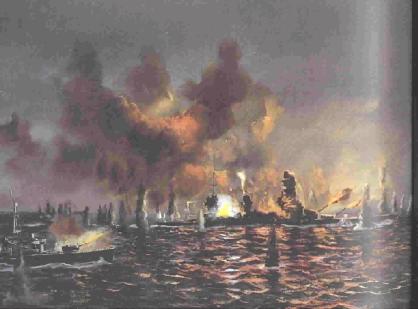 Yamashiro and Shigure ride into the Valley of death

Nishimura’s force entered the southern entrance to Surigao Strait and was discovered by the American PT Boats at about 2236.  Though the PTs scored no hits they provided critical updates on the Japanese to Oldendorff.  At 0300 the American destroyers began a devastating series of attacks on the Japanese flanks.  They sank two destroyers and damaged another which had to turn back, but the real damage occurred when both Fuso and Yamashiro were hit. Fuso took two torpedoes fired by the destroyer USS Melvin.  She slowed and then blew up and broke in two sinking with all hands.  This account has been contested in recent years but many find the new version less believable than the first. Key in the evidence was the rescue and capture of Yamashiro’s Executive Officer in the north end of the strait and the surviving logs of the other Japanese ships which reported the sinking. Yamashiro though hit continued north with Mogami and the last destroyer Shigure.  At 0353 West Virginia opened fire and score hits on her first salvo. She was joined by California and Tennessee at 0355, the other battleships with their Mark 3 fire direction radars were slow to open up. Maryland got off six full salvos by ranging in on the splashes of West Virginia, California and Tennessee.  Mississippi logged the final salvo of the battle and Pennsylvania got no shots off.  West Virginia fired 16 salvos, 96 round of 16”armor piercing shells, Tennessee got off 69 rounds and California 63 each of 14” armor piercing shells, while  Maryland added another forty eight 16” rounds.

The Yamashiro and Mogami sailed into the maelstrom absorbing hit after hit and gamely fought back. Yamashiro hit the destroyer Albert W Grant which was also hit by friendly fire badly damaging her. Finally both ships ablaze they turned back down the strait with Yamashiro sinking with few survivors at 0420.  Shima’s force entered the fray and the Light Cruiser Abukuma was damaged by a torpedo fired by PT-137 and fell out of the formation. She was sunk on 26 October by Army Air Force B-24s. As Shima came up the strait his force entered the battered remnants of Nishimura’s force, the burning halves of Fuso and the retreating Mogami and Shigure. Assuming the halves of Fuso to be the wreckage of both battleships Shima beat a hasty retreat but in the process his flagship Nachi collided with Mogami flooding Mogami’s steering engine room and leaving her crippled.  She was attacked again by American cruisers and aircraft and as abandoned at 1047 and scuttled a torpedo from the destroyer Akebono sinking at 1307 on 25 October. 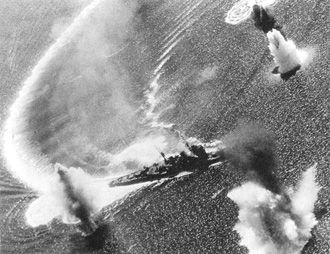 The battle was one of the most lopsided surface engagements of the war.  When it was over only one of Nishimura’s ships had survived the “lucky” Shigure.  Shima’s force survived the night but most of his ships were sunk in the following by war’s end. Nachi was sunk in Manila Bay on 5 November by aircraft from the USS Lexington with a loss of over 800 sailors while Shima was in a conference ashore.

With the exception of Albert W Grant and a PT Boat the American force was unscathed the old Battlewagons dredged from the mud of Peal Harbor had led the fleet to a decisive victory in the last duel between Dreadnaughts ever fought. The Japanese died as Samurai trying to complete a hopeless mission against a far superior force.