To Take Increased Devotion… Pearl Harbor at 75, a Personal Reflection

I never will forget the day that I took a Navy launch from Naval Station Pearl Harbor to the USS Arizona Memorial. It was Easter Sunday, March 26th 1978, the day before my 18th birthday and I was in Pearl Harbor as part of a Naval Junior ROTC Cadet Cruise. Cadets from my school sailed aboard the USS Frederick LST-1184 from San Diego to Pearl, and remained there for a week until returning to San Diego aboard the USS Gray FF-1054.

I honestly don’t know how many young people ever have had that kind of adventure, but for me I know that those three weeks were profoundly important in who I am today, but the one that constantly reverberates in me is the visit to the Arizona Memorial. Back then there was no visitor center on Ford Island, nor was the USS Missouri moored where the USS Oklahoma was that fateful Sunday. The day was sunny with partly cloudy skies, the sunlight reflected on the placid waters of Pearl Harbor. As the launch, manned by Sailor’s in Dress Whites neared Ford Island the bridge like white memorial loomed ahead, the rusty barbette of the battleship’s “C” turret rose slightly out of the water aft of the memorial, and the mooring quay with the USS Arizona inscribed upon it glinted in the bright morning sunlight. To our rear cruisers and destroyers lined the piers of the Naval Station. 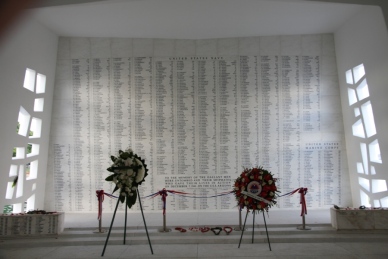 Alighting from the launch I went aboard the memorial at the entry room and walked across the bridge and the assembly room before entering the shrine. As I walked slowly across the bridge I peered into the water below thinking about all the men still entombed in the wreck. Pausing in the shrine I read the names of the 1,177 men killed aboard Arizona that Sunday morning, one of those was the ship’s chaplain, Captain Thomas Kirkpatrick. It was a pivotal moment for me. I had begun to feel a call to the ministry but in that moment I was sure that I wanted to serve as a Navy Chaplain. I remember finding a post card that I had sent my grandparents from the USS Gray when we returned to San Diego, my words were “Dear Ma Maw and Pa Paw, I think I am supposed to be a Navy Chaplain.” I laughed when I saw it because I was then serving as a Chaplain in the Army Reserve. Sadly, when my grandmother died in November 1996 I was deployed, and that simple postcard, my link with that part of my past was discarded by family members who did not think enough to read it, or if they did didn’t give enough of a damn about me to save it. I should have taken it when I had the chance, but sometimes I am too sentimental.

It took me a while to get there, my long strange trip included a 17 ½ year detour in the U.S. Army before I became a Navy Chaplain in February 1999.

Abraham Lincoln spoke of the ground that was hallowed at Gettysburg in his Gettysburg Address. The wreck of the Arizona is also hallowed. Despite our best efforts we cannot consecrate it more than the men who served aboard her that day seventy-five years ago, but we can as Lincoln said so well “be dedicated here to the unfinished work which they who fought here have thus far so nobly advanced. It is rather for us to be here dedicated to the great task remaining before us — that from these honored dead we take increased devotion to that cause for which they gave the last full measure of devotion — that we here highly resolve that these dead shall not have died in vain — that this nation, under God, shall have a new birth of freedom — and that government of the people, by the people, for the people, shall not perish from the earth.”

For me that means to continue to serve as a Chaplain in the Navy, never forgetting that the duty of a Chaplain is with his or her Sailors, Marines, Soldiers, and Airmen, especially when they go in harm’s way.