Forgotten Yet Honored Soldiers: the Legionnaires of Camarón

Today is the 155th anniversary of the sacrifice of the men of the 3rd Company, 1st Battalion Of the French Foreign Legion at Camarón. The war that they were fighting was in an unjust cause launched by Emperor Napoleon III to gain control of Mexico, but that takes nothing away from their heroism, heroism that even their opponents honor today. Seldom are the exploits of the soldiers of an imperialist conquering power honored by those who fought against them, but this is one of those rare exceptions. 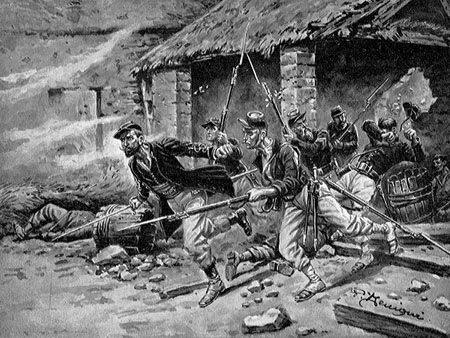 Almost every Army or nation has a story of a heroic group of soldiers that fight valiantly and often die against enemies of far greater strength and quite often in unjust causes. The United States has the Texan defenders of the Alamo and Custer’s 7th Cavalry at Little Big Horn. The British have a number of such exploits, including that of their soldiers at the Battle of Rourke’s Drift in the Zulu War. The Germans have the nearly 300,000 men of the 6th Army lost at Stalingrad, and the dying Soviet Union had the 9th Company of the Red Army’s 345th Independent Guards Airborne Regiment which conducted a heroic defense against Afghan Mujahideen at Hill 3234 during Operation Magistral in 1989. All of their causes were unjust, but the gallantry and sacrifice of so many of these soldiers was undeniable, even to their opponents.

However, seldom are “the few” honored by friend and foe alike for more than a century after their defeat. Among these few, these gallant few, are the 65 men of the 3rd Company of the 1st Battalion Légion Étrangère (Foreign Legion). These few would battle nearly 2000 Mexican Soldiers at a small Hacienda called Camarón on April 30th 1863 while proving an advance guard escort to a supply convoy which was to relieve French forces besieging Puebla. 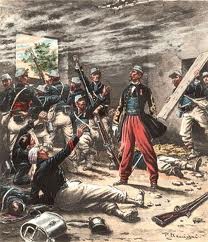 The 3rd Company was severely undermanned due to dysentery and when they went into battle 50 Legionnaires and all of the company officers were incapacitated.  The battalion Quartermaster, Captain Danjou took command and was joined by two other officers, Lieutenant Clement Maudet and Lieutenant Jean Villian to lead the remaining 62 Legionnaires on their mission to a tragic destiny.

Beginning their March at 0100 they had marched 15 miles before stopping for breakfast at 0700. While brewing their coffee with the convoy which was now several hours behind schedule, scouts from the company saw a force of several hundred Mexican cavalry approaching.  They fought a battle with the cavalry for several hours before retreating to the Hacienda around the middle of the morning.

The Mexican forces under the command of Colonel Francisco Milan were joined by additional infantry and cavalry and now numbered over 2000 men, 800 cavalrymen and 1200 infantrymen. Milan’s Forces outnumbered the surrounded Legionnaires by a factor of forty to one, but he was neither bloodthirsty or bent on revenge. Colonel Milan realized that the Legionnaires situation was hopeless and offered Danjou the chance to surrender with honor. With his force reduced to under 50 men following the skirmishes Danjou refused. He replied: “We have munitions. We will not surrender.”

The Legionnaires defense held against several assaults but with casualties mounting, ammunition dwindling and without food or water in the scorching heat Danjou rallied his men. He had lost his left hand in Algeria 10 years before and had a wooden hand fashioned.  He went to each Legionnaire offering words of support, a sip of wine and had each man swear on his wooden hand that they would not surrender.  While doing so he was shot and killed about noon.

Lieutenant Villian, the battalion’s much disliked Paymaster who volunteered for the mission took command, and the Legionnaires fought on suffering immensely under the fierce and accurate fire from the veteran Mexican troops. Somehow as happens in battle, the formerly hated officer inspired the Legionnaires to continue the fight until he was shot dead at about 1600 hours. Before he was killed Villian responded to another demand for surrender: “We may die, but never will surrender.”

On his death, Lieutenant Maudet, the last surviving officer took command of the few remaining Legionnaires.

Around 1700 Colonel Milan approached the now burning Hacienda to offer the surviving Legionnaires another chance to surrender. The Mexican Commander looked inside the charnel house and saw Maudet rallying about a dozen Legionnaires amid piles of dead and wounded. Despite the hopeless situation Maude refused Milan’s offer and so Colonel Milan went back to his troops and ordered another assault on the position

With only himself and 5 remaining Legionnaires Maudet surveyed the situation. The Mexican troops were massing for another attack and his troops were down to one round of ammunition each. He and his men loaded their weapons and he ordered a charge into the massed Mexican infantry.  They engaged the Mexicans in hand to hand combat, Maudet and one Legionnaire were killed and four captured. The senior surviving noncommissioned officer, a Corporal Maine, requested that the survivors be treated for their wounds and be allowed to maintain their weapons and escort the remains of Captain Danjou to France.

Acceding to the bloodied Corporal’s request Colonel Milan, who was valiant and honorable officer was overwhelmed with emotion, and said: “What can I refuse to such men? They are devils.” Colonel Milan’s words were very similar to what the German Army called the U.S. Marines at the Battle of Belleau Wood in 1918. 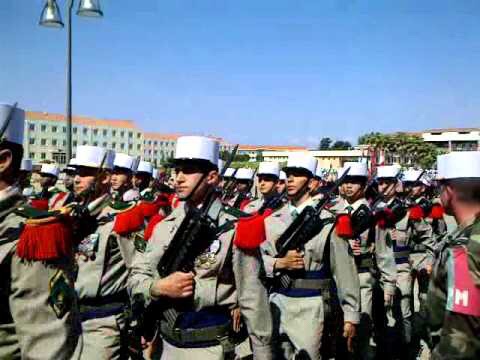 Today Camarón is still marked by the Legion wherever its troops are stationed much as the United States Marine Corps marks their founding.  The wooden hand of Captain Danjou is removed from its case in the museum and paraded with the assembled troops. The officers serve their troops coffee symbolizing the coffee the defenders never drank and the commander of Legion at the headquarters as well as units deployed read the account of the battle. The week before the fall of their besieged redoubt at Dien Bien Phu was overrun the Legionnaires of the 13th Demi-Brigade of the French Foreign Legion remembered the sacrifice of their predecessors at Camarón with their commander, Lieutenant Colonel Lemeunier read the story over the radio to the embattled garrison.

The Mexican Army too will mark the courage of the Legionnaires with a parade, speeches, and visitors including French dignitaries including the French Ambassador, and Foreign Legion veterans today. It is a fitting tribute to the men that fought that day; and it is honor that with good reason the Mexicans do not extend to the soldiers of the United States military who invaded them more than once, massacred their soldiers, and whose government took over 40% of Mexican lands, and still treat Mexican immigrants, documented and undocumented as criminals or potential criminals.

Maybe the Mexicans understand the concept of honor better than us.