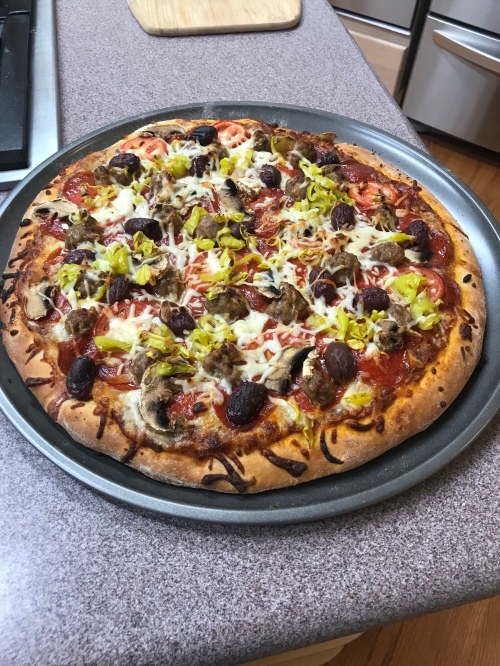 It has been a nice day with our friends in the DC area and our Papillon dogs. It was very relaxing, I got to sleep late, enjoy a nice home cooked breakfast with our friends. After that I retreated to the basement where I watched two World Cup games, Mexico vs. South Korea, and Germany vs. Sweden with Pierre and Izzy beside me on the couch.

Since I have been a fan of the German Mannschaft since mid-1980s when I first took an interest in the soccer with Bayern Munich and the National Team I have become a more and more serious follower of international soccer. I have to say that I really get into well played games especially when my teams are playing and when games are close and my team is on the verge of either advancing to another round or being eliminated things can become very tense, not that the world will end or anything like that, but sometimes it feels like it.

It was like that today when Germany, the reigning champions had to come back to avoid being eliminated in the group stage for the first time since before WWII. In fact they have reached the semifinals the past four World Cups. Tony Kroos the German National who plays for Real Madrid scores the winning goal in the 95th minute, which not only kept Germany alive but set them up well to advance if they defeat South Korea and Mexico with wins or ties against Sweden. Needless to say I will be cheering for Mexico as hard as will be Germany on Wednesday morning.

After the game I went back upstairs, relaxed and socialized and then made The Padre’s Pizza.

What most people don’t know about me is that I worked some of my way through college and seminary working in pizza parlors. While I was on my first active duty tour in the Army I began to experiment with my own pizza dough and sauce recipes and over the years I have become quite well known to my close friends for it. It’s a lot of work because I take the time to craft each pizza, and despite the work I find it very relaxing and good for stress relief. I should do it more often at home.

I love doing it. I love making the dough to perfection, seeing it rise, and turning it into a pizza dough. I love cutting the vegetables so that they not only look good but cook perfectly. I love crafting the sauce with my own blend of spices. Then I love building the pizza so that when it cooks that it looks as spectacular as it tastes. There really is an art to it you don’t see every day.

Sometimes people ask me why I don’t try to start a pizza parlor, but truthfully I do is truly artisan and trying to mass produce it would take away the fun and turn a stress relief activity into a chore. Likewise I will not answer the question of “when does a pizza become a pizza?” (An obscure Seinfeld reference.)

Now like last night everyone has gone to bed but me and Piere. I’m finishing this up so it will Post after midnight and I will go back to reading the book Seduced By Hitler: the Choices of a Nation and the Ethics of Survival. It was published in 2000 and while I have had it in my library for at least 10 years I never read it until this week. I’m about 40% through it and I will give a synopsis when done.

So anyway, until tomorrow.

Filed under life, Loose thoughts and musings, sports and life