In Today’s Struggle for Principle with Trump there Will be No Republican Stephen A. Douglas

As I watch President Trump’s administration attack the law, the Constitution, and violate the civil rights and human rights of citizens as well as people who have come to the United States to flee oppression and danger at home; to threaten freedom of speech and freedom of the press; to categorize political opponents inside and outside of his party as traitors; to legitimize the most repressive dictatorial regimes while attacking longstanding allies; even as he works to destroy the work of American Presidents and diplomats to build a world order that has brought great benefit to the United States and the world by defeating the Nazis, Imperial Japan, and eventually the Soviet Union. He has chosen the choice of being a rogue superpower rather than being the moderating and stabilizing force in the world that it has played since World War Two. Robert Kagan wrote in the Washington Post yesterday:

“The United States’ adversaries will do well in this world, for Trump’s America does not want war. It will accommodate powers that can harm it. It will pay them the respect they crave and grant them their spheres of interest. Those that depend on the United States, meanwhile, will be treated with disdain, pushed around and used as pawns. At times, they will be hostages to be traded for U.S. gain. The United States and the postwar liberal order protected them and helped them prosper, but it also left them vulnerable to any American leader willing to offer them up as sacrifices to appease aggressors. That is a kind of realism, too… It recognizes no moral, political or strategic commitments. It feels free to pursue objectives without regard to the effect on allies or, for that matter, the world. It has no sense of responsibility to anything beyond itself.”

The President and his administration show little regard for the Constitution and established law in this country and our treaties and agreements with other nations. He appoints men and women who had they been Germans after the Second World War would have been charged with war crimes and crimes against humanity to high office. He defends White Nationalists and Neo-Nazis. He confounds loyalty to himself with patriotism and loyalty to the country.

He uses propaganda to demonize those who seek law and justice. In any normal time a cry would arise from his own party saying “no more,” but his party does nothing, and even those leaders who occasionally speak out against his policies take no actions because they are afraid of retribution. That happened to long time conservative Congressman Mark Sanford in South Carolina this week when the President tweeted his support for his primary opponent. During the primary season White Nationalists, self-proclaimed Nazis, and other Trump supporters advocating the most extreme, unconstitutional and abhorrent positions often swept the field against conservatives who themselves would have been considered extremists just a few years ago. The GOP is on the Party if Trump and it took less than two years to become so.

Barbara Tuchman wrote in her book The March of Folly: From Troy to Vietnam something that we are observing up close and personal as President Trump and his administration flounder in a sea of make believe, a cloud cuckoo land of alternative facts, alternative truth, and alternative history:

“Wooden-headedness, the source of self-deception, is a factor that plays a remarkably large role in government. It consists in assessing a situation in terms of preconceived fixed notions while ignoring or rejecting any contrary signs. It is acting according to wish while not allowing oneself to be deflected by the facts.”

To be true, the Trump administration is not the first in history, in fact not even in our own country to ignore facts when making decisions. However, it is remarkable in its ability not only to shun facts but to make up its own narrative that depends on denying reality while impugning the character, honesty, and decency of those who present facts and truth that is verifiable. To be sure, competence and prudence are not and probably will never be marks of President Trump, his closest advisors, or his enablers in Congress. My hope is that some Republican in either the House or Senate rises up to confront the ineptitude and folly being demonstrated on a daily basis. 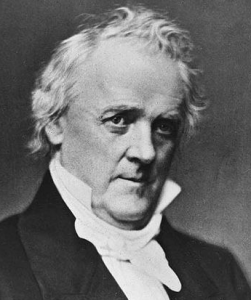 In some ways the incompetence and refusal to deal with reality by the Trump administration reminds me of the administration of James Buchanan during the years before the American Civil War. Buchanan’s collusion with Chief Justice Roger Taney regarding the Dred Scott decision before his inauguration stained him from the beginning and poisoned his relationship with Congress by declaring that the Congress never had the right to limit slavery as it had in the Missouri Compromise. Buchanan’s presidency is considered by most historians to be the worst in American history, incompetent, arrogant, and ineffective.

Likewise, Buchanan’s attempt to jam the Lecompton Constitution through Congress as a reward to Southern Democrats blew up in his face. The Lecompton Constitution was a gerrymandered bill which ignored the will of the vast majority of Kansas’s settlers who were anti-slavery. The work of the pro-slavery element in Kansas was so onerous that it brought Republicans and Northern Democrats together for the first time as Southern Democrats threatened secession if Kansas was not admitted as a Slave State. Ignoring warnings that supporting a measure that would open the door to slavery in all the western territories would split his party, Buchanan pushed on. His intransigence on the matter brought Democratic Senator Stephen A. Douglas of Illinois to the fore in opposing it. Nicknamed “the Little Giant,” Douglas was the odds on favorite to be the Democratic nominee for the Presidency. Douglas was not against the institution of slavery, and he was a racist, but he had no tolerance for those who would upend carefully crafted compromises to expand it through the whole country. Thus he  took his case to the floor of the Senate and to the President himself.

The Confrontation between the Senator and the President was unparalleled. Douglas recalled, “The Lecompton constitution, I told Buchannan bluntly, was a blatant fraud on the people of Kansas and the process of democracy, I warned him not to recommend acceptance of it. With his head titled forward in that bizarre habit of his, he said that he intended to endorse the constitution and send it to Congress. “If you do,” I thundered, “I’ll denounce it the moment that it is read.” His face turned red with anger. “I’ll make Lecompton a party test,” he said. “I expect every democratic Senator to support it.” I will not, sir!”

Angry and offended by the confrontation of Douglas, Buchanan cut the senator off and issued his own threat to Douglas and his political career saying, “I desire you to remember that no Democrat ever yet differed from an administration of his own choice without being crushed….Beware of the fate of Tallmadge and Rives,” two senators who had gone into political oblivion after crossing Andrew Jackson.” The redoubtable Senator from Illinois was undeterred by the President’s threat and fought back, “Douglas riposted: “Mr. President, I wish to remind you that General Jackson is dead, sir.”  It was an unprecedented action by a sitting Senator, to confront a President of one’s own party and threaten to oppose him in Congress was simply not done, but now Douglas was doing it, but doing so to his President’s face, and the consequences for him, his party, and the country would be immense.

Undeterred by facts, Buchanan and Southern Democrats fought for the bill’s passage. When Buchanan’s supporters pushed for Lecompton’s approval and the admission of Kansas as a Slave State, Douglas fired back, warning “You do,” I said, “and it will lead directly to civil war!” I warned the anti-Lecompton Democrats of the North that the President intended to put the knife to the throat of every man who dared to think for himself on this question and carry out principles in good faith. “God forbid,” I said “that I ever surrender my right to differ from a President of the United States for my own choice. I am not a tool of any President!”

Under Douglas the Northern Democrats joined with Republicans for the first time to defeat the admission of Kansas as a Slave State. Douglas recalled the battle:

“After the Christmas recess, the Administration unleashed its heavy horsemen: Davis, Slidell, Hunter, Toombs, and Hammond, all southerners. They damned me as a traitor and demanded that I be stripped of my chairmanship of the Committee on Territories and read out of the Democratic party. Let the fucking bastards threaten, proscribe, and do their worst, I told my followers; it would not cause any honest man to falter. If my course divided the Democratic party, it would not be my fault. We were engaged in a great struggle for principle, I said, and we would defy the Administration to the bitter end.”

Douglas and his supporters did just that, Buchanan and his supporters were outfought and outmaneuvered by Douglas’s Democrats and their Republican allies. The bill was sent back to Kansas where in a new election the people of Kansas voted solidly against the Lecompton Constitution. In the following Congressional elections the thoroughly discredited Democrats lost their majority, their party now hopelessly divided with Southerners determined to destroy Douglas at any cost, even if it meant losing the presidency, the conflict opened the door for the election of Abraham Lincoln in 1860.

I wonder if there will be a Republican in the Congress with the courage that Stephen A. Douglas displayed in confronting the incompetent and vindictive President Buchanan during the Lecompton Crisis. Will there be a Republican with enough courage to stop the insanity of the Trump administration even if it means in the short term to divide the party and doom their political future? Honestly I doubt it as does conservative Republican political strategist Rick Wilson. Wilson wrote:

“Nothing you do matters to this Congress. No matter what damage you inflict on our economy, our alliances, trade, our stature in the world, our role as an exemplar of democratic values, our ability to serve as an honest broker in the international community, and our security, Paul Ryan and Mitch McConnell will lay supine before you.”

But if Trump’s march of folly is to be stopped, someone in the Republican Senate or House will have to have the courage to stand up and defend the necessity of thinking for themselves, and doing what is right, sadly there is no Stephen Douglas in today’s GOP.