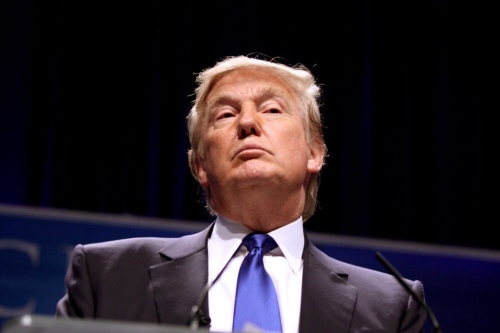 In 1935 the American writer Sinclair Lewis wrote a novel called It Can’t Happen Here. It was a semi-satirical novel about a Fascist state coming to power in the United States. In it Lewis wrote these words:

“A country that tolerates evil means- evil manners, standards of ethics-for a generation, will be so poisoned that it never will have any good end.”

I believe that we are seeing that happen before our eyes. That being said I realized from the beginning of the Trump campaign that it would to this at home and abroad. I was looking back at my archives going even back to 2012 after President Obama’s re-election and found that I had written about Trump’s maniacal desire to upend defy political and social norms and demonstrate his contempt for the Constitution and our laws. When he announced his campaign he began by appealing to nationalism and racism and he never stopped.

On December 15th 2015 I wrote these words in an article entitled The Mob Determined the Theme. Some people thought that I was writing about the Mafia or gangs, but I was talking about mob rule. Those words are here:

“When Albert Speer discussed the ability of Adolf Hitler to captivate the German people he noted something important. He discussed how Hitler and his minions played to them set by the disgruntled and angry German population. Speer wrote, “The mob determined the theme. To compensate for misery, insecurity, unemployment, and hopelessness, this anonymous assemblage wallowed for hours at a time in obsessions, savagery and license. The personal unhappiness caused by the breakdown of the economy was replaced by a frenzy that demanded victims. By lashing out at their opponents and vilifying the Jews, they gave expression and direction to fierce primal passions.”

Hitler played to that misery, insecurity and the obsessions of the politically and economically disaffected “conservative base” that no longer trusted the party establishments of the old-line conservative parties. He also played to the deep-rooted racism and anti-Semitism of those people. Hitler was an outsider, he was not indebted to any traditional party hierarchy and as such was able to throw away convention and play to the fear and anger of many Germans.

Donald Trump is doing today and he is running circles around the traditional politicians of the Republican Party. Every time trump says something that would have gotten himself blown out of the race twenty years ago had he said such things, today his poll numbers keep going up. He is now trending around 35% in most polls of GOP voters and my guess is that those numbers are low, as some supporters may not be willing to tell a pollster that they are for Trump, at least yet. My guess is that Trump’s support in the GOP is probably higher than 40% and won’t go down much. The party hierarchy and most of Trump’s primary rivals consistently criticize Trump, but most say that they will back him if he is the nominee. I cannot imagine that being the case twenty years ago when both the party establishment and the voters would have dumped him in a New York minute. 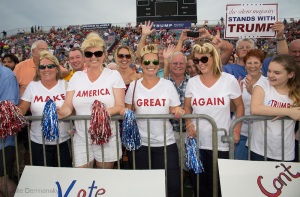 Trump understands the mood of much of the traditionally conservative public better than his Republican establishment competitors. Trump is not stupid, unlike Hitler who actually believed in his message, Trump is not a radical, he cannot be, he has too much invested in the system. Instead, he is a street smart and pragmatic businessman who is exploiting the situation on the ground to his advantage. His opponents and the GOP establishment are frightened, but like the hidebound conservatives of the Weimar Republic who either dismissed or Hitler or thought that they could contain him are not willing to make a stand. As a result, Trump is able to play to the mood of the base and to coin a phrase, to “trump the establishment” by channeling the deepest anger, fear, hatred, xenophobia, and racism that the GOP establishment refuses to acknowledge. When there is a push back by the establishment it further angers the base, and Trump, quite adroitly threatens to leave the party; something which would doom the GOP in the 2016 general election, and possibly shatter the party.

Trump’s GOP opponents should not underestimate him and neither should establishment Democrats. Trump is using his celebrity bombast and the democratic process to take control of a major political party, and he is a lot smarter than most political analysts give him credit. As such, as a non-establishment outsider, Trump has a chance at taking over a major political party, something that has never before happened in the United States.

If he succeeds in his takeover bid, it will forever change American politics, especially if he is able to ride the fear, hatred, and fear to the White House. I don’t think the latter will happen, but I would not exclude it from the realm of the possible. To paraphrase Speer’s words about Hitler and Goebbels: By lashing out at their opponents and vilifying the Muslims and immigrants, Trump gave expression and direction to fierce primal passions of a disaffected GOP base.”

On July 22nd 2017 I wrote I Alone Can Fix It: Trump’s Dictatorial Message as I observed the new GOP nominee at the GOP National Convention. Five months later I wrote on December 27th 2016 I wrote Freedom is Never More than a Generation from Extinction. On March 22nd of this year I wrote Trump’s America: Saving the Form But not the Soul. I could go on and link many other articles but I will not, I have incriminated myself enough tonight.

Now that Donald Trump is in power he has used the Department of Homeland Security through a militarized ICE using mass incarcerations, expulsions, separating children from their families, and operating prison facilities from which people who are not with any crime charged are held indefinitely without legal representation. He has opening given support to White Supremacists including Neo-Nazis. He continues to threaten the Press, the political opposition, and long time allies using his Twitter account and his sycophants at Fox News and a multitude of Right Wing propaganda outlets to peddle lies as truth label those who tell the truth as liars and peddlers of Fake News.

He shows no interest in Civil Rights except support measures at the Federal, State, and local levels to roll back civil rights for ethnic, racial, and religious minorities, women, and LGBTQ people. His economic and social policies are designed to benefit his allies, especially the top 1% and politically reliable Evangelical Christians while impoverishing and disenfranchising all others. He labels all who oppose or criticize him and his policies as enemies of the state and traitors.

In terms of foreign policy he has during the course of his presidency personally undermined and now destroyed alliances and treaties that Presidents from Franklin Roosevelt to Barak Obama worked to sustain. Those Presidents who included Dwight Eisenhower and Ronald Reagan helped build those alliances and forge those treaties for our good and the good of our allies and those who we welcomed into the fold of democratic ideals. Instead he makes diplomatic war on our allies while openly praising dictators abroad and carrying out the dictates of Vladimir Putin.

This brings me back to his attacks on the American Justice system of which almost all are tied to his, his family’s, and his advisor’s connection with Russia attempts to undermine American elections and the military attack and occupation of parts of the Ukraine, which during his campaign he supported by saying that the conquered Ukrainian regions “probably preferred Russian rule.” Neither before or after his election did he, his aides ever condemn the shoot-down of a commercial airliner by Russian forces near the Russian-Ukrainian border. The actions in the Ukraine led the G-7 to expel Russia. This weekend the President proposed reinstating the Russians despite the fact that they are still actively working against the United States and our Allies.

He is launching a trade war with our allies and leading trading partners which will be disastrous to most Americans.

Later today he will attempt to “negotiate a deal” with the North Korean dictator Kim Jung Un while admitting that he has done no preparation for it. I would hope for a lasting peace on the Korean Peninsula but I believe that the President will either come back with a deal that works to the advantage of the North Koreans or which will fail and bring about war in Northeast Asia. If he does come up with a deal it is very possible that he will use it as a means to go to war against Iran which will result in an apocalyptic conflagration in the Middle-East.

As he does all of this he surrounds himself with terrified yes men who are too afraid of him to tell the truth while increasing his attacks on the law, the Constitution, and people that he sees as his personal enemies at home and abroad. As I watch him and read what he writes I am reminded of Winston Churchill’s who wrote:

“You see these dictators on their pedestals, surrounded by the bayonets of their soldiers and the truncheons of their police … yet in their hearts there is unspoken fear. They are afraid of words and thoughts: words spoken abroad, thoughts stirring at home — all the more powerful because forbidden — terrify them. A little mouse of thought appears in the room, and even the mightiest potentates are thrown into panic.”

I fear for what is coming and I am not sure if our institutions, laws, or Constitution will survive in any recognizable form. I want them to, but right now I do not see light at the end of this tunnel, and I would much rather be wrong than right.