When Conservatives Make Deals With Devils: Lessons from 1929 and 2016 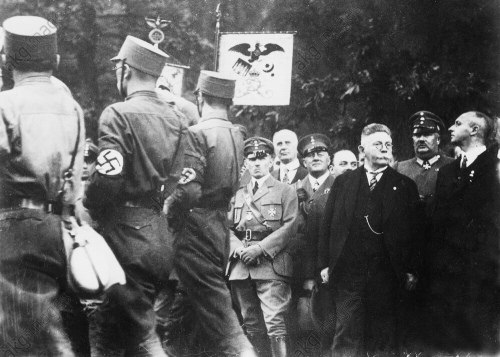 Just a short thought for the day. I have been reading Joachim Fest’s biography of Adolf Hitler. Like so many books that I read it is a massive volume but despite that and the fact that it has been translated from the original German it reads very well. This is not always the case with books translated from German.

I came across a passage dealing with Hitler and the Nazi Party’s surprising election victories that propelled it to prominence among the parties of the German Right in 1929. It was a landslide in which the other major parties of the German Right and center were decimated in the Reichstag. Alfred Hugenberg, a highly successful businessman and publisher had become leader of the Deutschnationale Volkspartei (German Nationalist Peoples Party) DVNP decided to enter into an alliance with Hitler. Fest wrote:

In evaluating this episode we must not overlook the power-hungry blindness of the German nationalist conservatives. By parasitically seizing on the force and vitality of the Nazi movement, by uniting with the secretly despised but also admired upstart Hitler, they were trying to forestall German nationalist conservatism’s departure from the stage of history, when that departure had been long since decided.

The German conservatives had experienced a collapse much like the ossified leaders of Republican Party during the primaries of 2016 as Donald Trump and his followers swept on to claim the GOP nomination. Despite their comments about the untrustworthiness of Trump throughout the primaries they fell in line to support him, not because they thought he could become President but because they thought they could harness the power of the wave that thrust him to prominence. But they were as wrong as Hugenberg and the German conservatives in 1929. Trump ended up taking their party from them. Fest wrote of Hugenberg and the German conservatives:

Fascinated by the demogogic wildness of the Nazis, Hugenberg and the rest of the conservatives in the coalition stared at the tremendous wave they had set in motion. They encouraged it, repeatedly lent impetus to it, and in their smug faith in their natural leadership thought they were riding it when they had long since been swamped by it.

The German left would also underestimate Hitler like the American left did with Trump in the days leading up to the 2016 general election where despite losing the popular vote by a large margin Trump won the election based on narrow victories in key swing states. But that is a matter to be explored at another time.

The Republican leadership, especially Party Chairman Reince Priebus thought that they could control Trump and harness the energy of his followers but they have been proven wrong.

What will follow is still to be determined, but without the cynical cooperation and feckless non-resistance to Trump the GOP leadership under Priebus lost the party. The GOP is now the party of Trump, just as the German conservative movement was swallowed up by the Nazis after Hitler took power and every other conservative party voted itself out of existence even before Hitler outlawed other parties.

Hugenberg would be a party of Hitler’s first cabinet, just as Priebus would become Trump’s first Chief of Staff, and both soon found that they had been outmaneuvered and made fools of by the men and movements they thought that they could control. Others found themselves similarly outmaneuvered including Franz Von Papen, Oskar Von Hindenburg, and General Kurt Von Schleicher, the last would pay with his life for his mistake during the Night of the Long Knives.

Of course there are many more comparisons to be made, but for tonight it is enough to note that leaders of failing parties seldom remember that if you make a deal with a devil, that devil will almost always win. Both Hugenberg and Priebus demonstrate that fact.