What Did He Know, When Did He Know It? The Question that Now Haunts the Papacy of Pope Francis

Please do not get me wrong, this is a difficult post to write. Those who know me will understand that this is not an ad hominem attack on the Roman Catholic Church. Though I am not Roman Catholic I have always loved it as our Mother Church and I have been an admirer of Pope Francis since he ascended to the Papacy when Pope Benedict resigned. Likewise I am not a particular admirer of Archbishop Carlo Maria Viganò nor his faction of the Church, his charges that Pope Francis was of the crimes of Cardinal McCarrack shortly after he was elected Pope seems within the realm of the possible.

Whether it is true or not I do not know, but the Vatican and especially Pope Francis himself must deal with these accusations before they destroy the Church, and left alone to fester without being refuted and disproved that will happen and the results are unimaginable, unless you are a historian. The last two times the Church split, in 1054 and 1517 the results were dreadful, nit just from a religious point of view but from a human perspective.

But the question of what Pope Francis knew and when he knew is is not only a good question, but a necessary question; what did this Pope know and when did he know it?

If I can ask that of a political leader that I despise, I can ask it of a religious leader I respect and admire because I value truth more than sentiment. While I acknowledge that Archbishop Carlo Maria Viganò, the Vatican’s former top diplomat to the United States, and a conservative reactionary who often seems to be attempting to justify himself against criticism from across the spectrum of the Roman Catholic Church could have less than honorable intentions when he released an 11 page accusatory diatribe against Francis, I cannot simply dismiss his accusations. They are well within the realm of the possible, no matter what his motive.

The fact is every Pope in recent memory has been covering up scandal after scandal to protect their allies, the Roman Catholic Church, like all churches or religious organizations is a political beast and has been since Constantine. However, unlike what was said by Archbishop Viganò, this is not the fault of homosexuals. It is the fault of a secretive culture, absolute monarchy, and rules about celibacy which are not normal. Celibacy has to be a special grace, it is not the normal order. For a man or woman to maintain it is difficult. I know this for a fact because between 1996 and 2013 I spent 10 of 17 years away from my wife due to military deployments, schools and assignments. It was voluntary celibacy to remain true to my marriage vows when it would have been very easy to violate them and keep my reputation clean in the process. I cannot imagine trying to do that for life. Likewise, while it is probably true that some, and maybe even a sizable number of Catholic Catholic clergy are homosexuals, as were some of the offenders listed in the Pennsylvania Grand Jury report, but the problem is bigger than them as was shown in that report.

I knew a Navy Catholic Chaplain who was removed from the service for multiple affairs with married women who were members his Navy Chapel parishes. Most were officer’s wives. He was turned in by a jilted woman who had was shacking up with until he told her to leave his home. She had the good on him and contacted close to 30 other women who corroborated her allegations which she sent to his Bishop as well as the Marine General commanding his unit, who by the way was Catholic.

He was a sexual predator masquerading as a priest. He, as most predators was sent to a retreat center for such clergy. Unlike others, this man was such a sociopath that the retreat center, run by a world renowned Catholic pastoral care and psychologist sent him back uncured. He was not in the slightest bit repentant. He told me that when his bishop saw the accusations that all he said was “at least it wasn’t little boys” and before he was kicked out of the Navy tried his wiles on one of my neighbors.

The Navy had the courage to throw him out and remove him from service with an Other Than Honorable discharge, an administrative separation that is the equivalent of a Dishonorable Discharge without a trial by Court Martial. However the Church was slow to respond, after he was discharged from the Navy he retained his clerical faculties for many years. He is finally listed as having his faculties suspended and being forbidden to represent himself as a Catholic Priest as of the dates of the initial accusations, but that did not occur for years, during which time he took on a Ph.D. and spoke at many Catholic conferences.

Sadly the culture of the Catholic Priesthood, as well as many other religious vocations across the faith spectrum is attractive to men who want power. They do so in an institution that normalizes such power and for which the protection of offenders is the default setting of Church leaders regardless of whether they are liberal or conservative. In fact they don’t even have to be Roman Catholic. The Bishop who ordained me in a conservative Anglo-Catholic denomination in 1996 was hit with multiple accusations which took down him and the religious community that he had founded. I knew some of the accusers, the Bishop and that community were attempting to be more like the Roman Catholics of a century ago than the current Roman Catholic Church. If you want to know more details sent me an email and I will put you on the trail to discover that this is not just a Roman Catholic problem.

Likewise, this is not simply an American problem, it can be found around the world in the Roman Catholic Church and is bolstered when the Church is also the State religion or the religion of the colonial regimes whose native descendants rule in autocratic fashion. Of course other religious and other Christian denominations have similar issues, but they are not the Roman Catholic Church which for good or bad is so often the face of Christianity at large than it is not.

Regardless of this, there are many faithful priests and bishops who are not criminals and regardless of their sexual orientation have never harmed anyone. I personally know many of them who are disgusted by the power hungry prelates that scorn justice and defend the indefensible. They are men who I have served with in the military and in the civilian world, men who helped Judy and I in our spiritual development. Likewise there are the Nuns who helped and cared for both of us along the course of our life and faith.

That being said, I want the Church to face its demons, and reform. If it does not I am all for the State exercising it’s legal duty to protect citizens by investigating the Church, uncovering the truth, and bringing the guilty wherever possible to justice even if it brings shame to the Church. The same goes for any other church or religious body which allows such crimes to continue and attempts to cover them up.

I read a columnist today who noted two pathways to reform in the Church, that of Saint Francis of Assisi, and that of Martin Luther. As a historian, theologian, and student of both Saint Francis and Martin Luther I think that is a bit simplistic. There are reforms that take place within the Church, like Francis, and those that thrown out and branded as heretics for their dissent like Luther. But even with the Church there are “reforms” that are either progressive or reactionary, defensive or redemptive. There are many examples of all of these movements in Church history, and not just in the Roman Church.

As far as the costs of being a reformer who started in the Church and got thrown out like Martin Luther, I understand that. I got thrown of my former church about this time of year in 2010 for publicly stating my views about favorable views about women’s ordination, homosexuality, and Muslims. Thankfully, I had others who were willing to take me in to continue to serve as a priest, and that my former church was not the state religion. The ironic thing was that the Bishop who threw me out was later thrown out and stripped of his episcopate for attempting to go behind the backs of his fellow bishops to remove the nearly 25 active duty military chaplains to a different denomination. He extremely duplicitous and got his comeuppance.  If you want call it Karma.

But this is reality. If the Catholic Church does not face it the results will be more catastrophic for it than the Protestant Reformation. Wise leaders, and I really do pray that Pope Francis is one of them recognize the trends of history and the necessity to stand for justice and mercy even if it is costly. Truth and integrity matter. If religious leaders and institutions cannot stand for truth and integrity, if they cannot cry out for justice, and if they instead try to protect themselves and project an aura of infallibility, wrapped in historic myth they will only destroy themselves. 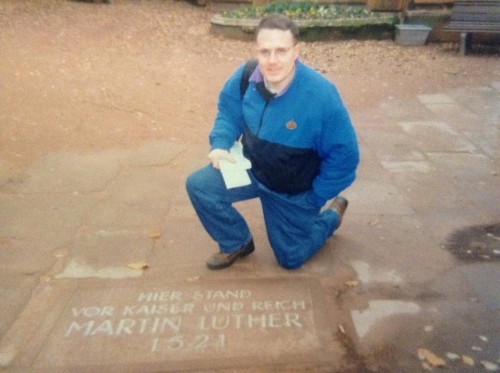 As Luther said to the Emperor, princes, and prelates of the Holy Roman Empire at Worms:

If that pisses off Catholics or Protestants, or for that matter members or leaders of any other religion or cult, even the Trump Cult, I am not sorry. Truth is truth, justice demands justice and as much as I admire Pope Francis, the truth must be told. It may not be pretty, and it may for a time seem like a disaster, but it will be the salvation of the Church. The same is true for the leaders of other Christian denominations and non-Christian religious.