We are spending our last night in Berlin after a rather quiet day which included a visit with Dr. Rink, the Bishop of the German Evangelische military chaplain service. We spent an our and a half with his and his chief spokesman at his office. I should have gotten some pictures of us and the offices but forgot because it was such an interesting visit. We will be leaving in the morning which is a holiday, the Tag der Deutschen Einheit, or day of German Unity which celebrates the official reunification of Germany in 1990. The preparations here are quite extensive with much of the area around the Brandenburger Tor and Reichstag blocked off for events and an already large police presence.

This afternoon I took a walk around the district that our hotel, the Hotel Dietrich Bonhoeffer Haus is located. Not far from it is Berlin’s Neue Synagogue, the restored frontal portion of a building dedicated in 1866 by Berlin’s Jewish community. Among those present at the dedication was Otto Von Bismarck, the the Minister President of Prussia prior to the Unification of Germany in 1870. 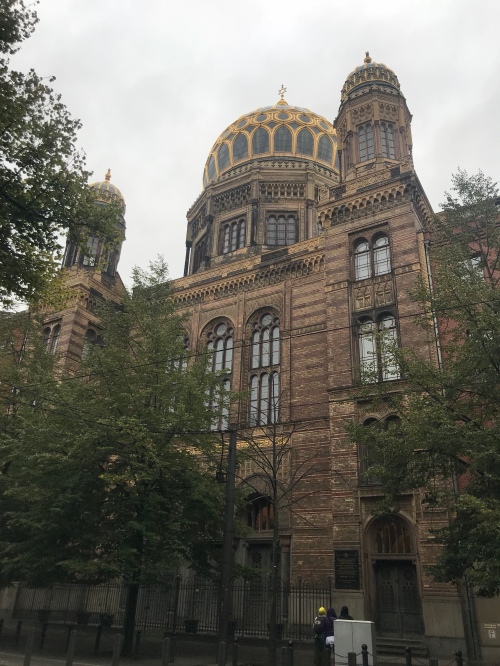 It was a massive structure that could hold over 3000 worshippers and its Moorish architecture and resemblance to the Alhambra in the Spanish city of Grenada. It was one of the first large buildings to be of iron construction. It is a beautiful structure with its great golden dome topped by a Star of David flanked by two smaller domes.

In addition to its place as a center of worship it was a center of Berlin’s largely assimilated and liberal Jewish community. Berlin was the center of the Jewish Enlightenment, or Haskalah in Germany, and Prussian Jews enjoyed full citizenship and civil rights going back to 1850. The movement emphasized secularism and equality. Prominent Jewish citizens included Albert Einstein, as well as theater and film director Max Reinhardt; composer, music theorist, writer, and painter Arnold Schoenberg, composer Kurt Weill, who is famous for his song Mac the Knife which was popularized in the United States first by Louis Armstrong and then Bobby Darin; and painter Max Liebermann, who was President of the Prussian Academy of Arts until the Nazi takeover in 1933. Additionally, Louis (Lazarus) Lewendowski the highly acclaimed liturgical composer and musician who put his imprint on much Jewish liturgical music used around the world today.

It was used for public concerts and it hand an organ and a mixed choir thanks to Lewendowski, making it a part of a distinctly western and liberal strain of Judaism. In 1929, Einstein performed a renowned violin concert in it.

When the Nazis seized power in 1933 the repression of Berlin’s Jewish community began. Jews lost their citizenship, their employment in the Civil Service and military, membership in professional organizations, and suffered many other humiliations and persecution. As a result many Jews left Germany. Einstein, Schoenberg, Reinhardt, and Weill all fled to the United States. Liebermann died of a heart attack in 1935. He lived near the Brandenburger Tor and reported said as Nazi Stormtroopers marched through it celebrating their takeover of the government: “Ich kann gar nicht soviel fressen, wie ich kotzen möchte.” (“I could not possibly eat as much as I would like to throw up.”)

Despite Nazi repression the Synagogue continued to operate and became a center for Jewish relief efforts. It was one of the few synagogues spared destruction during the Kristallnacht terror organized by Joseph Goebbels on November 9th 1938. A group of Nazis broke into the synagogue, vandalized the Torah scrolls, and attempted to set fire to the building. A Berlin Police Lieutenant named Wilhelm Krützfeld took action and ordered the mob to disperse because the building was a protected historical building. To make his point he drew his pistol and threatened the vandals. His actions allowed the Feuerwehr to arrive and ensured that the building was not burned. Krützfeld reported his actions and only received a verbal reprimand from the Nazi Police President Graf Helldorf who had played a major role in the organization of Kristallnacht. Krützfeld and members of his precinct also helped Jews with identity papers and warned them of Gestapo raids. He was transferred in 1940 and because he could no longer serve the Nazi state requested retirement due to health reasons in 1943. Following the war in 1945 he returned to active police service and died in 1953. his superior, Helldorf, became a part of the anti-Hitler conspiracy and was condemned to death by Roland Freisler and the Volksgericht in 1944.

The synagogue remained active until 1940 when it was ordered closed and taken over by the Wehrmacht which desecrated it and turned it into a warehouse for uniform supplies. It was badly damaged by allied air raids during the war and the main sanctuary was burned out and heavily damaged. The Ruins of the main sanctuary and the main dome were demolished in 1955 with the Jewish community meeting next door to the ruin. 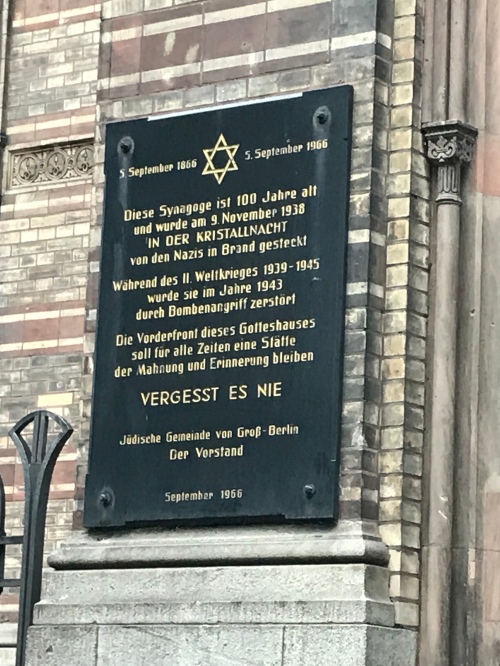 In 1988 on the 50th year anniversary of Kristallnacht the process to restore it as a Jewish cultural center began and it reopened in 1993. The restoration only comprised the front section of the building, but in 1995 the Reformed Jewish community of Berlin was reestablished in it. Today it functions as a synagogue, a cultural center, and a museum.

If you come to Berlin you need to see it.