The Monitor and the Virginia at 157 Years: The Clash of Ironclads at Hampton Roads 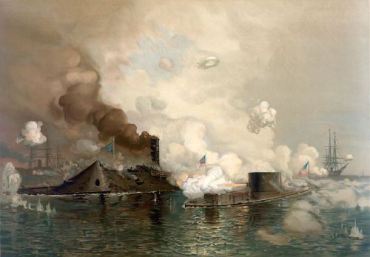 Today marks the 157th  anniversary of an event which changed naval warfare forever. It was a watershed event which ended the reign of the great wooden ships which plied the oceans of the world under massive fields of canvas sails.

It took place just a few miles from my office, if it happened today I would certainly be able to watch it from beach any of the beaches were I work at Joint Base Little Creek – Fort Story.

On that day, two very strange looking ships joined in battle. This is the story of the Battle of Hanpton Roads and the USS Monitor and CSS Virginia.

On the morning of March 8th 1862 the CSS Virginia steamed slowly from her base at Portsmouth Virginia into Hampton Roads at the mouth of the Chesapeake Bay. Awaiting her was a US Navy squadron of wooden warships including the steam Frigate USS Minnesota, the Sloop of War USS Cumberland and Frigate USS Congress and a number of smaller vessels. The Virginia was an armored ram built from the salvaged remains of the large steam frigate USS Merrimack which had been burned at Gosport (Now Norfolk) Naval Shipyard. Her plans had been leaked to the US Navy which was also in the process of constructing a number of ironclad ships of different types. The first of these ships to be ready was the USS Monitor, a small ship mounting a single heavily armored turret mounting two powerful 11” Dalghren smoothbore guns was still steaming to Hampton Roads when Virginia came out for battle.

During the ensuing fight of March 8th Virginia rammed and sank Cumberland which though fatally wounded disabled two of Virginia’s 9” in guns. She destroyed Congress by gunfire which burned and blew up and appeared to be in position to destroy Minnesota the following day as that ship had run hard aground. The losses aboard Cumberland and Congress were severe and included the Captain of the Congress and Chaplain John L. Lenhart of Cumberland, the first US Navy Chaplain to die in battle. During the battle Virginia had several men wounded including her Captain Franklin Buchanan. 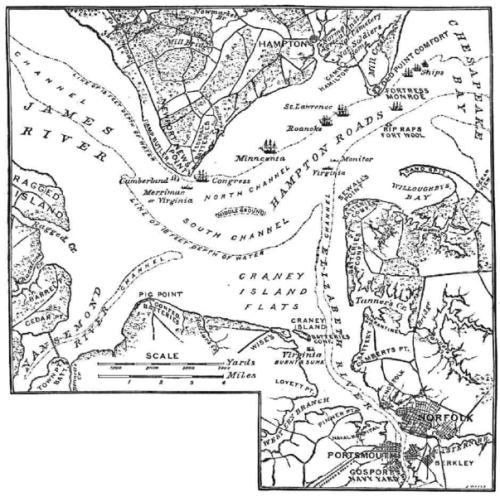 The next morning Virginia again ventured out and was intercepted by the Monitor. The ships fought for over three hours, with Monitor using her superior speed and maneuverability to great effect. During the battle Monitor suffered a hit on her small pilothouse near her bow blinding her Captain. Monitor’s executive officer, Lieutenant Dana Greene, the son of Union Brigadier General George Sears Greene, the hero of Culp’s Hill at Gettysburg took command. Neither side suffered much damage but the smokestack of Virginia was pierced in several places affecting her already poor engine performance.  Jones broke off the action and returned to Gosport for repairs and Monitor remained on station.

Secretary of the Navy Gideon Welles wrote after the battle:

“the performance, power, and capabilities of the Monitor, must effect a radical change in naval warfare.”

It did. The battle showed the world the vulnerability of wooden warships against the new ironclads. Monitor in particular revolutionized naval warfare and warship construction. Her defining mark was the use of the armored gun turret which over the succeeding decades became the standard manner for large ships guns to be mounted. Turrets like the warships they were mounted upon grew in size and power reaching their apex during the Second World War.

Both Virginia and Monitor reached less than glorious ends. Virginia had to be destroyed by her crew to prevent her capture just over two months after the battle on May 11th 1862. Monitor survived until January 31st 1862 when she sank during a heavy storm off Cape Hatteras North Carolina with the loss of 16 of her 62 man crew. The remains of two of those men, recovered during the salvage of Monitor’s engines, turret, guns and anchor were interred at Arlington National Cemetery on March 8th 2012. The relics from Monitor and some from Virginia are displayed at the Mariners Museum in Newport News (http://www.marinersmuseum.org )while one of Virginia’s anchors resides on the lawn of the Museum of the Confederacy in Richmond.