Books, the Freedom Of Speech, and its Limitations 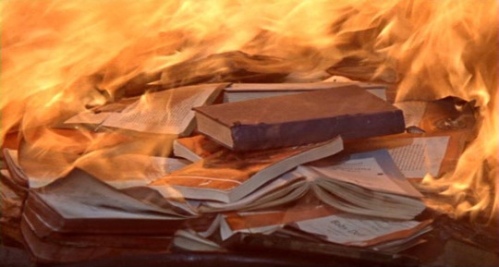 “The books are to remind us what asses and fool we are. They’re Caeser’s praetorian guard, whispering as the parade roars down the avenue, “Remember, Caeser, thou art mortal.” Most of us can’t rush around, talking to everyone, know all the cities of the world, we haven’t time, money or that many friends. The things you’re looking for, Montag, are in the world, but the only way the average chap will ever see ninety-nine per cent of them is in a book. Don’t ask for guarantees. And don’t look to be saved in any one thing, person, machine, or library. Do your own bit of saving, and if you drown, at least die knowing you were headed for shore.”

Books, I prefer physical copies but will read digital ones when they are available and more affordable than hard copies, are the key to comprehending the past, the present, and in preparing for the future. The one constant in history is humanity, as flawed and evil yet as brilliant and good as it can be. Barbara Tuchman wrote:

“Books are the carriers of civilization…They are companions, teachers, magicians, bankers of the treasures of the mind. Books are humanity in print.”

Unfortunately we now live in an age where many people, including leaders of great nations have stopped reading and have become entranced by the two dimensional television screen that George Orwell reminded us of in 1984. It was a screen that constantly told people what to think and at the same time was able to read their thoughts. It was a device much like cable television news programs, regardless of the ideology presented, or even more pertinent, Presidential News Conferences, speeches, or statements by Presidential spokesmen or the Press Secretary. All of those are one way conversations, the watcher has no control, other than to turn off the machine, but in 1984 only the party elite could turn it off.

In 1984 books were banned, and the language re-written on a daily basis to make it fit the prevailing ideology of the party. In Fahrenheit 451 books were not only banned but burned.

I have either just finished reading, or am in the process of reading John Meacham’s The Soul Of America, the Battle for our Better Angels, Doris Kerns Godwin’s Leadership In Time Of Crisis; Alistair Horne’s The Age Of Napoleon, William Russell’s Berlin Embassy, and have just started Anthony Beevor’s The Battle Of Arnhem, and Norman Friedman’s The British Battleship 1906-1946. I am also re-starting Marcus Aurelius’ Meditations, and Dan Van Der Vat’s The Pacific Campaign.

Needless to say I have a pattern of other books circling my landing field.

But the fact is we have become a culture that does not read to absorb wisdom, most would rather allow the tele-screen tell us what to do and think. That is a tragedy because it gives the propagandists the opportunity to talk at us without us having the time to digest the facts and determine if what they are saying is the truth or not. The same goes for the massive number of ideologically driven podcasts that do exactly the same thing.

To compensate I have stopped watching all cable television news shows, even those that I agree with from an ideological viewpoint. I prefer to read a diverse spectrum of newspapers, both American and international to get my news. It gives me the chance to think about what was written, fact check it, and try my best to ascertain the truth, even when it is uncomfortable. When I do this I find that even my best interpretations of the truth are full of conflict. If I was an ideological or religious fundamentalist, such might be troubling, but I realize that there are times that a completely ideological, religious, or fundamentalist worldview would lead to disaster.

I had a long Facebook conversation with a number of friends about limiting and even criminalizing Nazi speech. I was called a hypocrite for supporting a UN resolution dealing with this that the Obama Administration voted against. As much as I believe in the First Amendment, the Founders did not intend it to be a suicide pill that would allow extremists to hijack the right of freedom of speech to overthrow the Republic in order to crush the free speech rights of dissidents.

When one criticizes those in power for backing the free speech rights of people or groups who seek to destroy the rights of minorities and those who oppose the traditional rights of the powerful the defenders of absolute free speech, Associate Justice Of the Supreme Court and the Chief American Prosecutor at the major Nuremberg war crimes trials noted that “the Constitution is not a suicide pact.”

Anyone who has read my articles over the past decade knows of my reverence for the First Amendment including the unpopular opinions of minority groups. But there are times that the government and the courts have upheld limitations regarding the abuse and weaponization of the First Amendment against the rights of free speech, freedom or association. The fact that such actions are endorsed by President Trump or his Evangelical Christian supporters when endorsed by their political opponents while at the same time used against groups and that actually defend the rights of minorities against the actions of American White Supremacists and Neo-Nazis that support his stated objectives of silencing all opposition, and attacking the rights of all minorities, including Jews.

So anyway, there is much more to say, but it will have to wait.