And Then there Were None: The Doolittle Raid 77 Years Later

Today marks the 77th anniversary of the Doolittle Raid on Tokyo. 80 US Army Air Corps flyers manning 16 B-25 Mitchell bombers conducted a mission from the deck of the USS Hornet CV-8 which though it caused little damage changed the course of World War Two in the Pacific.

Orders in hand, Capt. Marc A. Mitscher, U.S.N., skipper of the U.S.S. Hornet (CU-8) chats with Maj. Gen. James Doolittle, U.S. Army. Some of the 80 Army fliers who took part in the historic Japanese raid are pictured with the two fliers.

Doolittle and his Airmen with Hornet’s C.O. Captain Marc Mitscher

The genus of the strike came from the desire of President Franklin Roosevelt to bomb Japan as soon as possible during a meeting just prior to Christmas 1941. Various aircraft types were considered and in the end the military chose the B-25 because it had the requisite range and had the best characteristics. Aircraft and their crews from the 17th Bomb Group which had the most experience with the aircraft were modified to meet the mission requirements. Lieutenant Colonel Jimmy Doolittle was selected to lead the mission.

Once the aircraft were ready they and their crews reported to Eglin Field for an intensive three week period of training. Supervised by a Navy pilot the crews practiced simulated carrier take offs, low level flying and bombing, night flying and over water navigation. When the training was complete the aircraft and crews and support personnel flew to McClellan Field for final modifications and then to NAS Alameda California where they were embarked on the Hornet Hornet’s air group had to be stowed on the ships hanger deck since the 16 B-25s had to remain of the flight deck. Each bomber was loaded with 4 specially modified 500 lb. bombs, three high explosive and one incendiary.

Departing Alameda on April 2nd the Hornet and her escorts, Hornet’s Task Force 18 rendezvoused with the Admiral William “Bull” Halsey’s Task Force 16 built around the USS Enterprise CV-6. task Force 16 provided escort and air cover during the mission. The carriers, escorted by 4 cruisers, 8 destroyers and accompanied by two oilers hoped to get close enough to the Japanese home islands so that the raiders could reach bases in allied China.

Hornet in Heavy Seas while launching the Raiders

The destroyers and slow oilers broke off on the evening of the 17th after refueling the carriers and cruisers. The two carriers and the cruisers then commenced a high speed run to get into range. However early in the morning of April 18th the ships were sighted by a Japanese patrol boat, the #23 Nitto Maru which was quickly sunk by the USS Nashville but not before it got off a radio message alerting the Japanese command. However the Japanese knowing that carrier aircraft had a relatively short range did not expect an attack. However, realizing the danger that the sighting brought, Mitscher elected to launch immediately, even though it meant that bombers would have to ditch their aircraft or attempt to land well short of the friendly Chinese airfields. The launch was 10 hours earlier and about 170 miles farther out from the Chinese bases than planned.

B-25 Launching from Hornet

Flying in groups of two to four aircraft the raiders struck the Japanese cities of Tokyo, Yokohama, Yokosuka, Nagoya, Kobe and Osaka. Minimal damage was done and only one aircraft was damaged. However they needed to fly nearly 1500 more miles to get to areas of China unoccupied by Japanese forces. Miraculously most of the aircraft and crews managed to find refuge in China. 69 of the 80 pilots and crew members avoided death or capture. Two flyers drowned, one died when parachuting from his aircraft. Eight men were captured. Of those captured by the Japanese three, Lieutenants William Farrow, Dean Hallmark and Corporal Harold Spatz were tried and executed for “war crimes” on October 15th 1942.

Many of the surviving flyers continued to serve in China while others continued to serve in North Africa and Europe, another 11 died in action following the raid. Doolittle felt that with the loss of all aircraft and no appreciable damage that he would be tried by courts-martial. Instead since the raid had so bolstered American morale he was awarded the Medal of Honor, promoted to Brigadier General and would go on to command the 12th Air Force, the 15th Air Force and finally the 8th Air Force.

The raid shook the Japanese, especially the leadership of the Imperial Navy who had allowed American aircraft to strike the Japanese homeland. The attack helped convince Admiral Isoroku Yamamoto that an attack on Midway was needed in order to destroy the American Carriers and the threat to the home islands.

When asked by a reporter about where the attack was launched from, President Roosevelt quipped “Shangri-La” the fictional location of perpetual youth in the Himalayas’ made famous in the popular book and movie Lost Horizon.

The raid in terms of actual damage and losses to the attacking forces was a failure, but in terms of its impact a major victory of the United States. The attack was psychologically devastating to Japanese leaders, including Prime Minister Hideki Tojo, whose personal aircraft was nearly hit by one of the raiders and Admiral Isoroku Yamamoto, who felt personally humiliated and dishonored by the fact that bombers launched from American carriers.

Likewise the raid gave the people of the United States a huge morale boost at a time when very little was going right. It forced the Japanese Navy to launch the attack on Midway that turned out to be a disaster, decimating the best of the Japanese Naval Air Forces and the loss of four aircraft carriers and enabled the US Navy to take the offensive two months later at Guadalcanal. 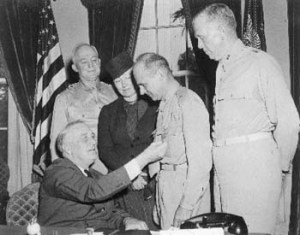 In the years after the war the survivors would meet to toast each other and to reminisce about their experiences. Those meetings stopped several years ago and in 2017 LTC Dick Cole was the last of Doolittle’s raiders still alive. He passed away just over a week ago on April 9th in San Antonio. A memorial service will be held for him there on Thursday the 18th Of April. He will be buried in Arlington National Cemetery.

Now that he and the rest of the Doolittle Raiders have passed away it is up to us to never forget the heroism, sacrifice and service in a mission the likes of which had never before been attempted, and which would in its own way help change the course of the Second World War.

Since most of us have never had to make that choice, and our President dodged the draft under the unusual circumstances often given to the children of the wealthy, we should ask what we would do if we were in Dick Cole’s shoes, or for that matter any of the men involved in the Doolittle Raid.

Since I have been serving as a volunteer since 1981 with multiple combat deployments to my name, and I. All of which I put my life on the line unarmed, and I still serve, so I know what I would do. However, that being said I really do have to wonder about most Americans, including those of my own generation who claim to support the troops without ever serving a day in uniform or even volunteering in the Peace Corps, Americorps, or even with the Red Cross.

The devotion of these men is seldom seen today. Our President routinely mocks those killed, wounded, or taken prisoner in war as “losers” and on the Howard Stern Radio program described avoiding sexually transmitted diseases in the 1980s as his “personal Vietnam.”

But I digress… the Greatest Generation is passing away. They fought fascism, the Nazis, and the Japanese Empire, and then many continued to serve during the Cold War, and in Korea, and some up to Vietnam. It is up to us the living to not disgrace their memory by forgetting them, or even worse, pretending that avoiding STDs is the equivalent of serving in harms way.

I think of the words of the character played by Jose Ferrer in the novel and movie written by Herman Wouk, The Caine Mutiny:

So until tomorrow, either put up, or shut up, especially if you wear the Red MAGA hat. Being a true American Patriot is not based on political ideology, Party, race, or religion. It is all about upholding the foundational principle of the Declaration: “We believe that all men are created equal, and are endowed by their creator with certain unalienable rights, among them being life, liberty, and the pursuit of happiness.”

After all, that is the foundational principal of the United States. It is true for all of us, or none of us, for once those rights are denied to anyone, the precedent can be used against any of us. To fall back on a quote from Captain Jean Luc Picard in the Star Trek the Next Generation episode The Drumhead:

“You know, there are some words I’ve known since I was a schoolboy: “With the first link, the chain is forged. The first speech censured, the first thought forbidden, the first freedom denied, chains us all irrevocably.” Those words were uttered by Judge Aaron Satie, as wisdom and warning. The first time any man’s freedom is trodden on, we’re all damaged. I fear that today…”

2 responses to “And Then there Were None: The Doolittle Raid 77 Years Later”