On July 31st 1941, barely over a month into the Nazi invasion of Russia, which at the time looked to be a sure win in the Nazi column. The Red Army had suffered immense losses. Hitler and the German High Command could sense victory in the offing, and on that day Hermann Goering, Hitler’s deputy sent a message to the head of the Reichs Security Main Office, SS Lieutenant General Reinhard Heydrich giving him express orders to plan for what the Nazis referred to as the Endlösung, or the final/total solution to what they called the Jewish problem.

“Supplementing the task assigned to you by the decree of January 24th 1939, to solve the Jewish problem by means of evacuation and emigration in the best possible way by according to present conditions, I hereby charge you to carry out preparations as regards organizational, financial, and material matters for a total solution (Gesamtlosung) of the Jewish question in all the territories of Europe under German occupation.

It was an order that Heydrich and his successors following his assassination by Czech partisans in 1942 would follow with deadly consequences to the Jews of Europe.

But the reality was set many years before when Adolf Hitler and other anti-Semites declared the Jews to be vermin, and sub-human. The German word is more sinister sounding, untermenschen. They simply refused to admit the Jews were fully human, and instead believed that the Jews were an alien subspecies, an infestation that had to be eradicated. In fact the very same kind of language that President Trump and many of his followers use to describe racial and religious minorities today: American blacks, Mexican Americans, Asians, Arabs of all religious beliefs, even Jews when they desire. They also use such language to describe political opponents.

“Die Judenfrage,’ it used to be called, even by Jews. ‘The Jewish Question.’ I find I quite like this interrogative formulation, since the question—as Gertrude Stein once famously if terminally put it—may be more absorbing than the answer. Of course one is flirting with calamity in phrasing things this way, as I learned in school when the Irish question was discussed by some masters as the Irish ‘problem.’ Again, the word ‘solution’ can be as neutral as the words ‘question’ or ‘problem,’ but once one has defined a people or a nation as such, the search for a resolution can become a yearning for the conclusive. Endlösung: the final solution.”

Hitchens, an Atheist was absolutely correct, when so many modern Christians, and other religionists of various types fail to see the danger. In fact, many of Trump’s most devoted religious followers, especially conservative Christians blissfully embrace that ideology. So much for their insistence on being pro-life.

The fact is that once a people, be they Germans, Americans, English, Russians, Chinese, Japanese, Turks, Persians, or so many others throughout history determine that any racial, religious, or political group, is less than human, that in time words will express their thoughts, and direct their actions. That my friends is a historic, religious, psychological, and sociological truth.

I hate to keep shouting this warning, of Yehuda Bauer who wrote:

With every, tweet and every statement the American President continues to stoke the fires of race hatred, and his followers seem to feed on it. I will not ever be a perpetrator, or a bystander, but it is possible that for speaking my views, I may someday be a victim, but I will go down fighting. 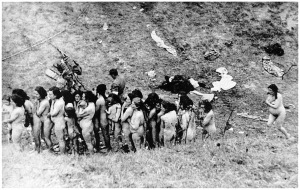 One response to “Prelude to the Final Solution: Hermann Goering’s Order to Reinhard Heydrich, July 31st 1941”