PTSD, Madness; to Perchance to Dream and Yet Live: Iraq Twelve Years Later 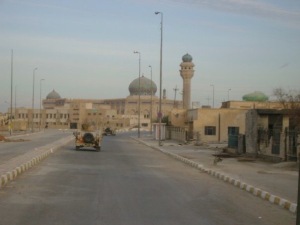 Guy Sajer wrote in his book The Forgotten Soldier these words:

“Only happy people have nightmares, from overeating. For those who live a nightmare reality, sleep is a black hole, lost in time, like death.”

I am exhausted tonight and I will be going to bed early for me. Hopefully I will get some restful sleep. I will be posting this article to post shortly after midnight by which time I hope not only to be in bed but asleep.

I have suffered a week of violent nightmares taking me back to my worst fears when I was serving in the badlands of Iraq’s Al Anbar Province in 2007 and 2008 supporting U.S. Advisors to Iraqi Army, Border Forces, Police, Highway Patrol, and Provincial Reconstruction teams. I rolled out of bed in a nightmare and cut my arm, and I woke up screaming and reaching for the pistol of an Iraqi insurgent who was about to shoot me, scaring the absolute shit out of our oldest Papillon dog Minnie, whose terrified Yelp woke me up.

I do not often write about it because I have been doing better, but I suffer from severe and chronic PTSD related to my experiences at war. The images are seared into my brain and sometimes the memories, and my deepest fears from my time there as an unarmed Chaplain working for the most part with very small groups of Americans and our Iraqis far away from the help of the big battalions if we got into serious trouble. I have written about those experiences and my struggles after my return many times on this blog. Likewise, I have had my story told on the front pages of the Jacksonville Daily News and the Washington Times. A video of my story is on the Department of Defense Real Warriors Campaign website, and is a large part of a chapter of Pulitzer Prize winning War Correspondent David Wood’s book  What Have We Done: The Moral Injury of America’s Longest Wars.

Since Iraq, my nightmares are very vivid and often involve much physical acting out. The physical acting out is unusual and I have actually injured myself badly enough to require trips to the emergency room after crashing hard throwing myself out of bed combatting imaginary enemies. Likewise, other have been violent and physical enough to wake Judy up.

This is nothing new. In another nightmare a year or so ago I was being attacked by an Iraqi insurgent. Our advisor team had been attacked as we were stopped in the dark to determine if an Improvised Explosive Device had been laid in the road in front of us. This was just a few miles from the Iraq-Syrian border between Al Qaim and COP South, the base of the advisor team which was working with the 3rd Battalion of the 3rd Brigade of the Iraqi 7th Division.

The part about being stopped in the desert in the dark while examining a potential IED actually happened. The attack did not happen but at the time I fully expected something like it to happen. We were sitting ducks on a two lane highway in the middle of the desert. But the attack never happened and we continued to COP South, which would become a part of many of my future missions.

But in my nightmare it happened and as the fighting devolved into close quarters hand to hand combat I found myself grappling an insurgent who was attacking me with a large knife. I managed to roll on top of him and knock the knife from his hand when I was awakened. I was on top of Judy and she was afraid that I was going to strangle her. My hands had not gotten to her throat but she woke me and told me what had happen. I dropped back to my side of the bed in a cold sweat. I could not believe what had happened and that terrifies me. I have set up an appointment prior to my regularly scheduled one with my shrink to talk about this.

Since I my day had been quite good and I have been much more relaxed at work since putting in my retirement papers the event came as a huge surprise. In trying to figure out what triggered it I was at loss until I remembered that I had had dinner last night with a retired Navy EOD Captain who had been my Chief Staff Officer at EOD Group Two and running partner before I went to Iraq. He was sent there not long after me and we met at Camp Victory in Baghdad not long before I left Iraq on the way to Kuwait and home in 2008. We enjoyed a wonderful dinner last night and we did talk about all manner of things including our time in Iraq and those men that we had served alongside.

I saw my sleep doctor yesterday regarding my latest sleep study. Without my sleep Medical Tinos I did not enter in to REM sleep, or dream sleep. In addition to prescribing me a different CPAP machine and increasing the pressure , he referring me to a neurologist colleague of his in the sleep clinic. Honestly, I don’t know what god it will do, but I hope that he can find some kind of answer.

“Nightmares exist outside of logic, and there’s little fun to be had in explanations; they’re antithetical to the poetry of fear.”

Yes,  I can still try to logically deduce my nightmares and night terrors, but the poetry of fear as Stephen King so rightly calls it cannot be fully explained. For those of us who deal with the memories of combat, of having been shot at and have seen the human cost of war, the dead, the wounded, the destruction, and the aftermath of war, they are all too real and they never completely leave us.

Over eleven years after I returned from Iraq I still find that much of me is still there. In fact, deep down I miss Iraq and the Iraqis that I was honored to know and to serve alongside and I still pray for them and for their future. Maybe someday I will get back. I would love that.

For all that remains with me about Iraq, I left a good part of me there, with my advisors and Iraqis. It was the best of times, and the worst of times, but it is a major part of who I am now, and why I want to continue to live.

Filed under History, iraq, middle east, Military, ministry, News and current events, to iraq and back, Tour in Iraq, us army, US Marine Corps, US Navy

5 responses to “PTSD, Madness; to Perchance to Dream and Yet Live: Iraq Twelve Years Later”