Fall Weiß: The Invasion Of Poland at 80 Years 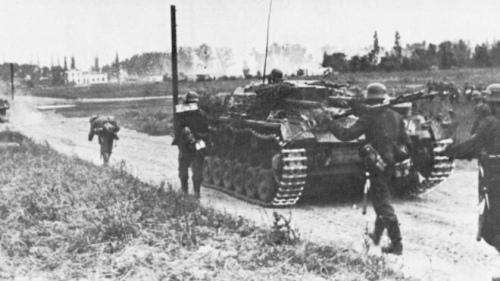 Eighty years ago today the German Wehrmacht on the orders of Adolf Hitler invaded Poland. It began the European phase of the Second World War and by the time the war was over Europe would be devastated, Hitler would be dead, and the world changed. An epoch had ended, a new epoch begun. It is quite possible that the epoch that began with the defeat of Nazi Germany is ending, and something else, maybe like the previous era from 1918-1945 is returning. But, what follows the epoch that began in 1945 and appears to be ending, is the province futurists, seers, and prophets.

Not being the Prophet, nor the son of the Prophet, I shall not engage in speculation, but return to 1 September 1939.

Hitler, who had concluded non-aggression pact with Stalin’s Soviet Union did not believe that Britain or France would do any more than to conclude a peace agreement after he finished Poland. Though France and Britain could have caused havoc and maybe even ended the war had they even attempted a serious campaign against Germany in September 1939, they did not. Hitler’s gamble which gave great concern to his Generals paid off. Poland was defeated, and with his pact with Stalin in place, Hitler was able to turn his attention to the West.

In spite of all expenditures in the preceding years Germany was armed only, for the war that Hitler launched on September 1, not for the war of September 3. The army did consist of 102 divisions, but only half of these were active and battle-ready. The state of its training left much to be desired. The navy was distinctly inferior to the British and even to the French fleets; not even the strength permissible under the Anglo-German Naval Treaty of 1935 had been attained. Shortly after the Western declarations of war reached Berlin, Grand Admiral Raeder declared tersely that the German fleet, or rather “the little that is finished or will be finished in time, can only go down fighting honorably.” The air force alone was stronger than the forces of the enemy; it had 3,298 planes at its disposal. On the other hand, the ammunition supply had been half consumed by the end of the Polish campaign, so that the war could not have been actively continued for even three or four weeks. At Nuremberg, General Jodl called the existing reserves at the outbreak of the war “literally ridiculous.” Troop equipment also amounted to considerably less than the four-month stock that the High Command of the army had demanded. Even a small-scale attack from the West in the fall of 1939 would probably have brought about Germany’s defeat and the end of the war, military experts have concluded.

But Hitler’s war went far beyond a typical military invasion, occupation and revision of borders or exploitation of economic resources. Hitler’s invasion of Poland was his first movement to achieve Lebensraum “living space” in the East. It was also a racial war where the less than human inhabitants of that space, especially the Jews would be expelled from their homes, driven into ghettos, and eventually exterminated. In Poland the victims included the Polish intelligentsia, professors, priests, military officers, government officials, nobility; anyone who might be able to lead a revolt.

By invading Poland Hitler had abandoned politics which had served him so well against, party rivals, domestic opponents, and later European and World leaders. After Poland Hitler rejected political options and pressed forward with war. Fest wrote:

One of the striking aspects of his behavior is the stubborn, peculiarly blind impatience with which he pressed forward into the conflict. That impatience was curiously at odds with the hesitancy and vacillations that had preceded earlier decisions of his. When, in the last days of August, Göring pleaded with him not to push the gamble too far, he replied heatedly that throughout his life he had always played vabanque. And though this metaphor was accurate for the matter at hand, it hardly described the wary, circumspect style with which he had proceeded in the past. We must go further back, almost to the early, prepolitical phase of his career, to find the link with the abruptness of his conduct during the summer of 1939, with its reminders of old provocations and daredevil risks. There is, in fact, every indication that during these months Hitler was throwing aside more than tried and tested tactics, that he was giving up a policy in which he had excelled for fifteen years and in which for a while he had outstripped all antagonists. It was as if he were at last tired of having to adapt himself to circumstances, tired of the eternal talking, dissimulation, and diplomatic wirepulling, and were again seeking “a great, universally understandable, liberating action.”

Hitler having brought about the destruction of Europe died by his own hand in his bunker having determined that the German people were not worthy of him. The conflict which he bathed in the mythological understandings of Wagner and Paganism was also an eschatological war. Race and Lebensraum overrode all sense of ethics, morality, and even diplomacy that might lead to long term alliances with partners that shared shared mutual interests. Instead, Hitler’s most base instincts, hatred, and the racist desire to establish his mythological Aryan Race as the overlords of Poland, and the. Of every other conquered nation put him in a league of his own.

Morally, too, he now crossed the boundary that made the war irrevocable. In the same conversation he demanded the repression of any sign “that a Polish intelligentsia is coming forward as a class of leaders. The country is to continue under a low standard of living; we want to draw only labor forces from it.” Territory that went far beyond the borders of 1914 was incorporated into the Reich. The remainder was set up as a general government under the administration of Hans Frank; one part was subjected to a ruthless process of Germanization, the other to an unprecedented campaign of enslavement and annihilation. And while the commandos, the Einsatzgruppen, commenced their reign of terror, arresting, resettling, expelling, and liquidating—so that one German army officer wrote in a horrified letter of a “band of murderers, robbers and plunderers”—Hans Frank extolled the “epoch of the East” that was now beginning for Germany, a period, as he described it in his own peculiar brand of bombastic jargon, “of the most tremendous reshaping of colonizing and resettlement implementation.”

Diplomacy has no place in eschatology. Interestingly, the same day he signed an order for a euthanasia program directed against the weakest members of his own German nation. In his worldview the handicapped, the mentally ill, and others with any kind of disability were life unworthy of life. They were a drain on society.

Anyway, this is enough for the night. I shall refrain from an comparisons with the current American President, the authoritarian and racist leaders taking power in parts of Europe, and the British Prime Minister working to overthrow Britain’s relationship with Europe while threatening the very fabric of the British Constitutional Monarchy, and the unity of the United Kingdom.

The ghosts of the past seldom remain there and often return with a vengeance when awakened by the same forces that unleashed them then.

2 responses to “Fall Weiß: The Invasion Of Poland at 80 Years”