Public Impeachment Hearings: Damning But Not a Sure Thing

This week we witnessed something that hasn’t been seen since I was in 9th grade, televised public impeachment hearings in the House of Representatives, and we saw the President’s defense shredded as witnesses, all members of the State Department gave damning testimony without a creditable defense, either by his Counsel, or by House Republicans. To make matters worse, the President began tweeting attacks against the woman he had appointed as Ambassador to the Ukraine, which only could be construed as witness intimidation. 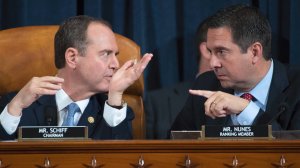 Unfortunately for the President he ran into a Congressman who is an experienced and sharp prosecuting attorney, Representative Adam Schiff of California. Instead of letting the President’s unhinged Twitter assaults go, Schiff quoted them in real time allowing the former ambassador the chance to rebut them in real time.

It was something that we will probably never see again because no future President would lack the self control to avoid further incriminating him or herself and adding charges against themselves. But this is Donald Trump, a pathological narcissist who cannot shut his mouth to save himself. Today in real time he threatened and attempted to intimidate former Ambassador to the Ukraine Marie Yovanovitch in real time, something that Congressman Schiff was quick to point out and read those tweets within seconds during the hearing. This is something that has never happened before.

What happens next? More hearings, both public and secret, and then a vote on whether to move to an impeachment trial.

After that the drama moves to the Senate. In normal times, Senators like Barry Goldwater would go to the President and demand he resign in the face of certain conviction, as he and others told Richard Nixon in August 1974. but these are not normal times. Instead of principled men like Goldwater the GOP Senate is stocked with spineless men without any ethics who will only break from supporting Trump if their constituents show a clear indication to do so or face defeat in their respective Senate races in 2020.

I for one do not know how it will end, but I do know that the President is not coming across well.

One response to “Public Impeachment Hearings: Damning But Not a Sure Thing”