What You Leave Behind: Thoughts on Leaving Iraq 12 Years Ago and Star Trek Deep Space Nine 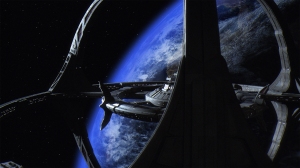 Tonight, Judy and I finished a several month marathon of Star Trek Deep Space Nine. The final episode was titled What You Leave Behind. It so happens that today is the twelfth anniversary of my last full day in Iraq. To me those memories are bittersweet. As Charles Dickens wrote: “It was the best of times, and the worst of times.”

I left a significant part of my soul in Iraq, and truthful, only part of me came back. I don’t know what part, I am still trying to figure that out, maybe I’ll figure it out someday and maybe I won’t, but does it really matter? Honestly, after twelve years does it really matter? For me everything changed after Iraq, just like in an imaginary science fiction show everything changed for every character. I am not going to try to describe the entire two part episode, but the great folks at Memory Alpha have done that very well. If you like any Star Trek series you need to visit that sight.  https://memory-alpha.fandom.com/wiki/What_You_Leave_Behind_(episode)

The episode is set at the end of great and costly war, political, and social change. In a sense DS9 is the perfect series for someone like me. It is my favorite Star Trek series, because it demonstrates the complicated nature and gray areas of life, faith, politics, relationships, alliances, power, and even love.

For the past week I have been having troubling nightmares and terrors, some of which almost seem like visions of the future. Some are directly related to my time in Iraq, evidently in one of them Judy had to deflect an attack from me. I have a neurological condition that when I am in REM sleep, my body still acts out my dreams and nightmares. I have had three incidents where I hurt myself bad enough to go to the ER, or medical clinic, including a broken nose.

But these have been different from past ones. They are a combination of Iraq experienced transposed into the future, a future where I watch our military mobilizing and going to war, and the. evacuating bases, destroying computers, and burning or shredding documents, and I am there in the middle of it. In these nightmares I see cities burning, people dying by the millions, and the United States, like the Federation in DS9 is not entirely innocent, just like Vietnam and Iraq. Of course the Federation was fighting a superior power, the Dominion and tried to conduct genocide against the Founders of the Dominion; although the Dominion Founders had no problem with genocide either, including their allies in the Alpha Quadrant. But I digress, I am struggling, and vulnerable; and despite my attempts to be strong, and fight rather than resort to flight, I am pissing people off. I seem to be coming across as overly sensitive and defensive, ready to fight and unwilling to compromise when I see people who have helped me attacked by friends on the right and the left. It seems that there are very few safe spaces left, so given the choice of whether to run away, go underground, or fight, I usually choose the latter.

Near the end of the episode, Dr. Bashir, and the former Cardassian Intelligence Agent and exile Garak, stand victorious in the ruins of Cardassia Prime, Garak and Bashir have the following conversation:

Bashir: “Eight hundred million dead.”
Garak: “And casualty reports still coming in. Well, aren’t you going to congratulate me, Doctor? My exile is now officially over. I’ve returned home. Or rather, to what’s left of it.”
Bashir: “Listen, I know that this must seem bleak.”
Garak: “Some may say that we’ve gotten just what we deserved. After all, we’re not entirely innocent, are we? And I’m not just speaking of the Bajoran occupation. No, our whole history is one of arrogant aggression. We’ve collaborated with the Dominion, betrayed the entire Alpha Quadrant. Oh, no, no. There’s no doubt about it. We’re guilty as charged.”
Bashir: “You and I both know that the Cardassians are a strong people. They’ll survive. Cardassia will survive.”
Garak: “Please, Doctor. Spare me your insufferable Federation optimism. Of course it will survive, but as not the Cardassia I knew. We had a rich and ancient culture. Our literature, music, art were second to none. And now, so much of it is lost. So many of our best people, our most gifted minds.”
Bashir: “I’m sorry, Garak. I didn’t mean…”
Garak: “Oh, it’s quite all right, Doctor. You’ve been such a good friend. I’m going to miss our lunches together.”
Bashir: “”I’m sure we’ll see each other again.”
Garak: “I’d like to think so, but one can never say. We live in uncertain times.”

I have to say that I now really understand that conversation, especially when the President of the United States openly consorts with the enemies of the United States, defames long time allies, and treats his senior military and foreign policy advisors as traitors, and incompetents.

But that is enough for the night. I have learned not to trust ideologues of the far right or the far left who promote scorched earth policies with anyone who offends them without trying to understand their opposites. I try to understand, but then I see people who I thought were safe condemn me. By being me and attempting to retain a sense of honor All of my life, I might end up achieving a place in Sto’Vo’Kor, the Klingon afterlife for the honored dead.

But as the Ferengi bartender Quark noted: “It’s like I said: the more things change, the more they stay the same.” But the fact is that the world that we think we know is not linear.

3 responses to “What You Leave Behind: Thoughts on Leaving Iraq 12 Years Ago and Star Trek Deep Space Nine”