The Night Our “Cheers” Closed: How Corporate America Destroys Community 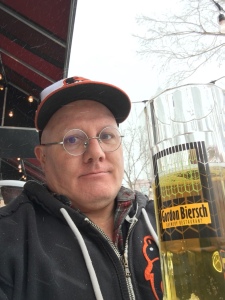 Sunday night was the last night that our version of Cheers for the last fourteen years closed forever. About 5 PM at no notice a representative of the corporate headquarters came in and told our General Manager that our Gordon Biersch Brewery Restaurant would close at the end of the evening for good. The employees were given no notice, one day they had a job, the next day they didn’t. The fault was not theirs, it was an out of touch corporation, which over extended itself by buying up an already bankrupt restaurant chain, Logan’s Roadhouse, and then neglecting its thriving brewery restaurants of the Gordon Biersch, Round Rock, Chicago Pizza chains, and other brands. The CEO is the former CEO and Managing Parter of Logan’s, owned by the venture capital company Centerbridge Partners, L.P.

In fact, rather than a corporate owned operation, our brewery-restaurant had the feel of a local neighborhood bar, like the one called Cheers. It really was a place where everybody knew your name. It became a gathering place for friends, who along with the managers, cooks, bartenders, servers, and hosts became like an extended family. Yes, there were some who were assholes and acted overly entitled, and others that pretty much kept to themselves, but overall the clientele embraced a broad spectrum of people. Everyone from businesspeople and bankers, military personnel, reachers, professors, doctors and dentists, pensioners, day workers, shipyard workers, technicians and IT types, small business owners, retail workers, bartenders, cooks, and servers from other restaurants of a wide variety of races and, ethnicities, nationalities, and religions, straight and gay, with ages from the twenties to the nineties.

For the most part we cared for each other. We looked out for the bartenders and servers. We had each other over for dinner, for holidays, those with building or mechanical skills donated time to help those less proficient or unable due to illness or physical disability. We all pitched in when money needed to be raised for individuals or groups, proceeds from tapping parties went to charities.
In a way I became the unofficial chaplain, performing three marriages, one funeral, providing counseling, or just listening, and making hospital visits.

We gathered to visit, talk, listen, joke, on good days and bad. To watch football, soccer, baseball, hockey, the Olympic Games, the World Cup, to talk about our days, to have a listening ear, over a beer. We had parties there, celebrated Oktoberfest, the New Year, but mostly came together at the end of a day, to download and relax, to share and to care, each in our own way. A few of us, including me got a chance to work with the brewer to brew a beer of our choice. I got a chance to learn the process of how to brew what we called The Padre’s Pilsner, a crystal clear champagne like  German Pilsner, hoppy, but not overly so, crisp without being too bitter.

My wife Judy specialized in making people happy by making them beautiful jewelry and pendants, which she mostly gave to the servers, hosts, and bartenders. When Judy was in the hospital for cancer surgery and knee replacements it was bartenders and servers who visited her, and who came by the house to visit when she was recovering, not people from church or Navy Chaplains. It was our executive Chef who cooked her special menu items which she could eat based on gastrointestinal ailments.

At about 6:00 PM on Sunday we were informed that a representative from corporate had come in, and told our General Manager that the restaurant would close forever that night. Many of us came in for a final last call. There were tears, and laughs as we remembered the good times, tears as we thought of the closing, and friends who had passed away. We shared hugs, stories, and collected our steins, even for friends who couldn’t be there. Sunday night I was so discombobulated and unfocused that I couldn’t think straight, I couldn’t write, I couldn’t even focus on television or books. 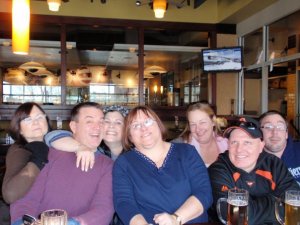 But now as I previously mentioned, thanks to the CEO of Craftworks Holdings, a man who has managed restaurants, but never breweries, and the hedge fund managers at Centerbridge Partners. They are sacrificing the jewels of their corporation, the unique craft brewery restaurants to prop of a steakhouse that has been rescued from bankruptcy once, then acquired by Craftworks, whose CEO had been the CEO and managing partner of that steakhouse until 2018. But don’t take my word, just google these things these things and you will find articles in the Wall Street Journal, the Craft Beer Journal Brewbound, and many local papers, and you can see the history and scale of the decline of what were once the trademark brands of Craftworks, which were all once described as growing and innovative have been crushed by cut after cut, even extremely profitable location on Honolulu’s Waikiki, where landlords disputed the reasons Craftworks gave for shutting them down. In our case the restaurant still had over a year left on its lease, the lease was not expensive, and despite the best efforts of Craftworks to make it less competitive, by dropping Happy Hour prices on weekends and when major sporting events were going on, which drove some customers to other restaurants, who carried the NFL package and lowered prices of their drinks and appetizers, it was still profitable. If I was a betting man I would say that since 2018 that corporate has been trying to drive customers and staff away, yet they still came.

Now, our Gordon Biersch Cheers family has lost its home. Thankfully, many of us are still committed to friendships and will meet Tuesday night at another local brewery restaurant. It’s not as fancy, but it will do, and we know that the owners there, local people, not venture capitalists will appreciate our business, as will any number of the other locally owned craft breweries. 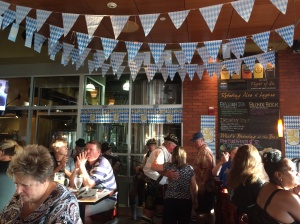 The sad thing is that the venture capitalists often back ventures that fail, making vast profits while leaving the businesses the leverage in ruins. Quality, sacrificed for cheapness, loyalty, for the mass market, community, for a mass of unknown and uncared for customers who are rushed in and out of restaurants at a rate slightly slower than fast food operations. The same can be said for almost every business organization that has been taken over by the venture capitalists. They have been destroyed, parted out, and many operations moved overseas to China, India, Malaysia, Pakistan, South Korea, the Philippines, and a host of other nations, whose people, environment, and living conditions we don’t care about while at the same time transferring the worlds wealth to the richest oligarchs.

It’s happening here. We have record employment but wages are still pitifully low, and many work more than one job to make ends meet. Even then, quite a few people are only a paycheck or two from bankruptcy. Our friends, other than management, who worked there did receive a severance, of two weeks pay at $2.13 an hour, the base minimum wage of restaurant workers, without tips, and of course all taxes will be diverted from what the corporate spokesman said was “compensating” the employees, regardless of the fact that quite a few have worked there a decade or more. It’s really shitty how corporate America treats hard workers, as well as those who are loyal to their employers. On Monday when the employees came in the trucks and men from corporate were already there, the move had been planned for some time, but the failed to notify Armada Hoffer, which holds the lease. They didn’t find out that the restaurant had closed until Monday. It’s immoral, it’s evil, and it will destroy our country. I talked to two friends tonight whose corporations are being reorganized even now. Both have their doctorates and the industries that they are in are making huge money, often assisted by agencies controlled by Trump appointees.

We didn’t learn the examples of 2008, and what happened to our little group, will happen again, and probably worse than in 2008, as the Trump Administration has loosed the bonds of the modern Robber Barons. Our little diverse family is now yet another victim of them. I worry more about our employees who are now out looking for jobs. But we will do our best to stay together.