When it comes to World War II and the ships of the German Kriegsmarine many Naval history buffs focus on the mighty battleships Bismarck and Tirptiz, sometimes the other major surface warships, or the massive battleships that never left the drawing board. However, for me it is the U-Boats, the German submarine fleet, which came very close to winning the war for Germany.  So for the next few nights I am going to be posting about some of the types of German submarines, or Unterseebooten, U-Boats.

The signature warship of the German Kreigsmarine of the Second World War has to be the U-Boat Type VIIC, the most numerous type of submarine ever produced by any Navy.  568 of these U-Boats would be commissioned between 1940 and 1945 as well as 91 of the Type VIIC/41.  The Type VIIC was developed from the prewar Type I and Type VIIA and VIIB classes.

Compared to contemporary American submarines of the Gato class they were smaller, mounted fewer torpedo tubes and had a shorter range. However the American boats were designed for the vast expanse of the Pacific while the German boats for the most part were operated in the smaller confines of the Atlantic and Mediterranean.

The Type VIICs were armed with a C35 88 mm/L45 gun with 220 rounds for surface actions and various types and numbers of anti-aircraft guns. The standard configuration for torpedo tubes was 4 bow mounted tubes and 1 stern mounted tube although a small number only carried 2 forward and none aft. They carried a maximum of 14 torpedoes and could carry 26 TMA Mines which would be laid at approaches to various ports.

The Type VIIC was powered by two supercharged Germaniawerft, 6 cylinder, 4-stroke M6V 40/46 diesel engines on the surface producing between 2,800 to 3,200 horsepower which gave the boats a 17.7 knot maximum speed on surface. For submerged operations the boats were powered by one of a number of different electric motors whose batteries were charged by the diesels. The electric motors produced 750 horsepower (560 kW) and could drive the boats a maximum of 7.6 knots. In 1944 many of the surviving boats were equipped with the schnorkel apparatus which allowed them to use their diesel engines underwater at shallow depths.  The had a range of 8190 miles at 10 knots surfaced which gave them a decent amount of operational flexibility for their Atlantic operations. 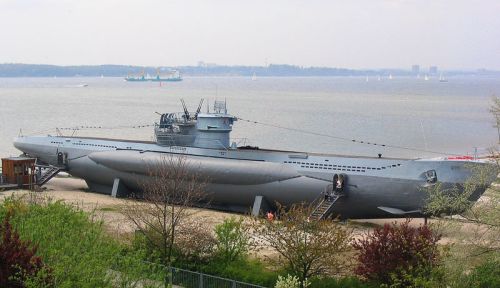 During the war the German U-Boat force suffered grievous losses many of which were Type VIICs. The VIICs performed excellently in combat and many survived engagements that would have sunk less tough boats. The most famous of the Type VIICs of all variants is probably the U-96 which was featured in the epic submarine film Das Boot. A number had post war careers in several navies and the last active VIIC the U-573 which served in the Spanish Navy as the G-7 was decommissioned in 1970 and sold for scrap over the objections of those that wanted to purchase her as a memorial.  The only surviving Type VIIC is the U-995at Laboe Germany where she is a memorial to all the U-Boat Sailors of the Second World War.  Two full sized mock ups one for exterior scenes and one for interior scenes were constructed for Das Boot and the exterior mock up was also used in Raiders of the Lost Ark.

The Death of HMS Barham
During the war U-Boats of all types sank nearly 3000 Allied ships including 175 warships among which were the carriers HMS Glorious, HMS Ark Royal and HMS Eagle and the Battleships HMS Barham and HMS Royal Oak. The Germans lost nearly 800 U-Boats of all types and over 28,000 U-Boat Sailors, about 75% of the force.

The films Das Boot and The Enemy Below are excellent reminders of the courage of the men that operated these submarines during the war. Though the Nazi Regime was evil the men of the U-Boat Service often displayed courage and ingenuity in the face of overwhelming odds and they nearly won the war for the Germans.