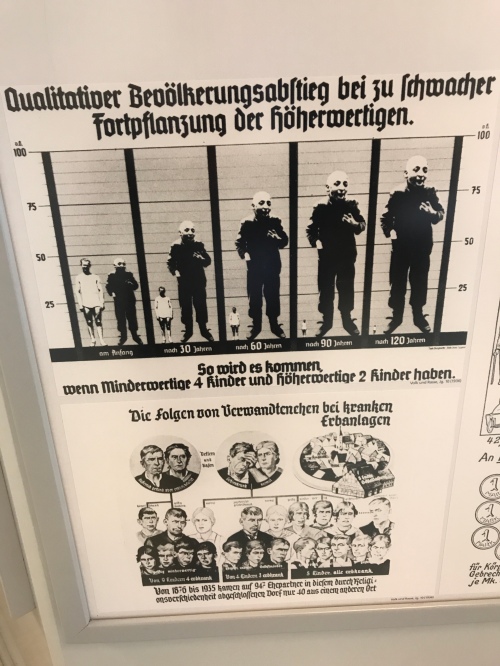 I am reflecting about the present in light of the past, and how policy wise, the Social Darwinist policies of the Trump Administration, and the words of his cult propagandists regardless and  and followers direct me to the Eugenics movement of the 1920s and 1930s in the United States, Weimar Germany, and other European nations, as well as Japan. But the eugenics movement was nowhere more malevolent, evident and active than it was in Hitler’s Germany. Likewise it is hard to believe that members of the administration as well as its supporters seem to believe, if you take them at their word that the elderly, disabled, mentally ill, and poor, especially those who are not white or Christian are a burden on the State, and are as the Eugenicists of the 1920s and 1930s, as well as Hitler’s Nazi Party believed, were ”Life unworthy of life .”

It seems hard to believe for anyone born after the mid 1960s, that government through its laws, decrees, and policies could deem certain people to be “life unworthy of life.” The most malevolent of such governments was the Nazi regime of Adolf Hitler, but individuals and institutions in the United States promoted the same ideology, but could not carry it to its logical conclusion.

The life that was unworthy of life included the physically and mentally handicapped or disabled, those with Downs Syndrome, Cerebral Palsy, Polio, and people with other neurological conditions. Likewise the mentally ill, those suffering clinical depression, schizophrenia, and other mental illnesses were considered to be life unworthy of life. Even the deaf were included, as well as veterans suffering from what we would now call PTSD or Traumatic Brain Injury. Also included were people labeled as “asocial” a very loose definition that could include almost any metal disorder or criminal act, including being a homosexual. 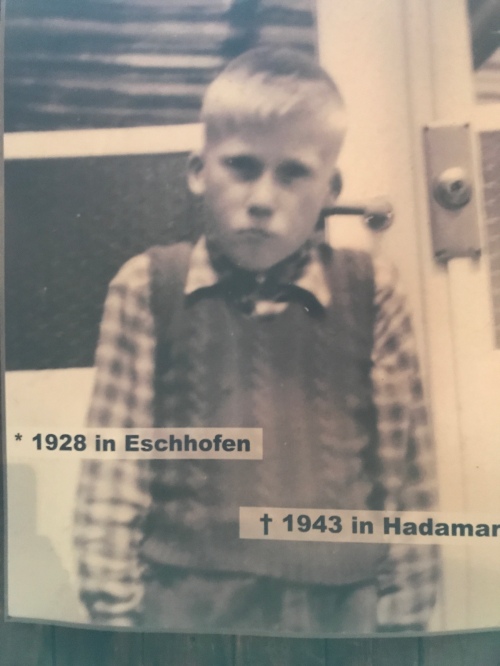 Tens of thousands Of such people were liquidated at the T-4 Euthanasia centers, most located in former hospitals, psychiatric institutions, or sanitariums.

Once the Nazis decided to eliminate them the same day as they invaded Poland in 1939, most of these people gassed with carbon monoxide gas from the exhaust of trucks or Diesel engines, and their remains were cremated. Others, especially children were either starved to death or given a lethal injection while they slept. In every case the next of kin of each victim was sent a standard form letter telling them that their relative had died of influenza, typhus, or some other disease while being given the best of care. The next of kin were then given the option of paying for an urn that may or may not have contained the ashes of their loved ones for inurnment near their home town. If they could not afford an urn the ashes were disposed of in the cemetery nearest to where they were killed. At Hadamar, it was on the grounds of the institution. 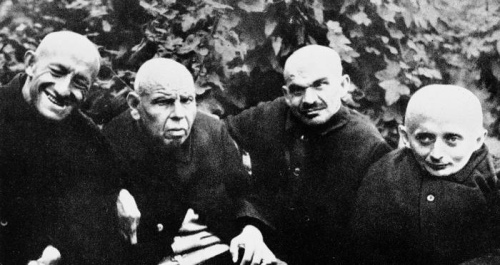 Despite the Nazis attempts to disguise their crime they could not be hidden, and after over 70,000 Germans were Euthanized the official T-4 Euthanasia program was ended in Germany.  The gas chambers, cremation ovens and facilities were disassembled by SS experts, and sent east to Poland, where they and their experienced technicians became key components of the Holocaust of the Jews at Soribor, Belzec, Treblinka, and Auschwitz.

But the Euthanasia program, despite Nazi lies to senior clerics and officials of neutral countries didn’t stop, it simply moved eastward as the SS Einsatzgruppen killed the patients at every mental hospital, sanitarium, old folks home, or orphanage they came across. Inside Germany at the four T4 centers over 80,000 were gassed. At Hartheim in Austria a Party was held on the gassing of the 10,000th victim. Richard Evans wrote:

“At Hartheim the staff held a party to celebrate their ten-thousandth cremation, assembling in the crematorium around the naked body of a recently gassed victim, which was laid out on a stretcher and covered with flowers. One staff member dressed as a clergyman and performed a short ceremony, then beer was distributed to all present. Eventually no fewer than 20,000 were gassed at Hartheim, the same at Sonnenstein, 20,000 at Brandenburg and Bernburg, and another 20,000 at Grafeneck and Hadamar, making a total of 80,000 altogether.”

The tolls in Poland, the Baltic States, and the Soviet Union were much higher, but outside of the T4 program which “officially” ended in 1941.

Now in the United States the laws guaranteeing health care to people are being challenged, the Secretary of Education has removed funding from the Department’s funding request for the Special Olympics, programs for the physically and mentally disabled under the SSI are being cut to the bone, and even care for disabled veterans is being threatened as not being economical because none of them are economically valuable to an administration for which profit is the bottom line of the insurance industry. Likewise, most supposedly pro-life Christians have no problems in cutting such programs because many have bought into the materialistic, Prosperity Gospel, whose fawning preachers have anointed President Trump if he were King Cyrus.

To them, criticism of the President cannot be tolerated, no matter how factual it may be. Thus, the  sick, then weak, then infirm, or mentally ill, who are not productive have no place in society. Inside the womb they are a remarkably powerful political issue; but once outside the womb they might as well be dead if you listen to Trump’s clique of Reichsbishofs, according to who cannot produce for the economy should not eat, get medical care, or live. They are life unworthy of life.

You see, in the authoritarian world in which we live, where an uninhibited and unhinged executive backed by profit minded billionaires, and greedy preachers, such lives; the old and infirm, the disabled, the mentally ill, the young but physically disabled, those with neurological issues, and birth defects stand in the way of profit, stand in the way of a “perfect” society.

If you directly challenged such people may not advocate euthanasia per say, they would not advocate for gas chambers, or firing squads. Instead they would turn a blind eye to depriving their victims of citizenship, starving them, depriving them of medical care, and turning them out of care facilities knowing that their families lack the capability of caring for them. and if they have any capacity for work, work them until they die, so long as they Confess Christ before they die.

How do we know that life does not matter to them? One way is to note the many times that pharmaceutical corporations have increased the costs of previously inexpensive yet vital life saving medicines by thousands of dollars a dose all for profit with little to no pushback from the White House, or the FDA, much less the Senate GOP majority, or the Evangelical supporters of Trump.

Please understand, this dystopian future need not happen if people of any faith, or no faith at all make a stand against a twisted idea of dictatorship backed up by billionaires and corporate entities that suck billions of dollars from the taxpayer and pay almost nothing themselves. Of course they couldn’t do it on their own in not supported by a de facto State Media, and a cult like legion of followers who would follow Trump even if he shot someone on 5th Avenue. His words, not mine.

I will turn 60 in just over two weeks, and this does bother me enough to speak out. As a senior military officer facing the end of his career and retirement amid multiple physical and emotional issues, it does matter. I keep two things in mind today. First is that of my own responsibility to my Oath, and to fellow citizens.  In that I am reminded of the words of German General Ludwig Beck who wrote:

And like Beck’s compatriot, Major General Henning Von Tresckow stated: “We have to show the world that not all of us are like him. Otherwise, this will always be Hitler’s Germany.” Or in my case, Trump’s America.

Historian Timothy Snyder reminds of a certain truth, which should we forget, as I imagine a large number of Trump supporters have:

Those are all hard truths to comprehend. As Americans we always presume that we are the good guys, when in fact many times we have acted in means contrary to the ideals of the Declaration as well as the Constitution, and other laws enacted by Congress. But our republic has survived, but its institutions are both resilient and fragile. History has proven this, we have even survived a civil war, but we may not survive an increasingly vindictive and unstable President, his compliant majority in the Senate, and the 35-40% of voters who are in effect no longer Republicans, but a Trump Cult which is largely buttressed by Conservative Evangelical Churches, and inspired by a President who uses force, legal, and extralegal alike to secure his rule.

We live in extraordinary times which call for extraordinary strength if our Republic is to continue in any form that resembles the intentions of the founders and their liberal enlightenment beliefs.

If we do not want to see the return of a full fledged government and industrial sponsored campaign to eradicate life unworthy of life, we have to fight. It is a fight that we did not chose, but if the Republic is to survive without becoming a criminal dictatorship we must speak up, and we must do so now. If we do not we have no one to blame but ourselves.

The choice is ours, and the time is now.