The Vittorio Veneto Class Battleships: The Pride of Italy and Victims of Changing Technology 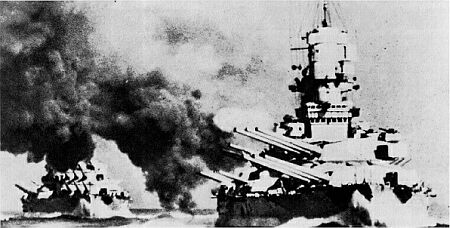 Once again I have decided to destress and not write about COVID 19, politics, or the Holocaust and instead write about an interesting, and even fascinating class of warships which have been often forgotten.

This is the first in a series of six articles on the battleships built under the provision of the Washington and London Naval Treaty limitations in the 1930s. I am not including the ships which were completed in the immediate aftermath of the Washington Treaty limitations. This series looks at the modern battleships that the World War II combatants would produce in the 1930s which saw service in the war.

Part one covers the Italian Vittorio Veneto class, Part Two the French Dunkerque and Richelieu Classes, Part Three the British King George V Class and Part Four the American North Carolina and South Dakota Classes. The thing that I find interesting about all of these ships is who inventive each Navy building them was considering treaty restraints and their own adherence to, disregarding of, or the technical issues that they faced as none had designed or built a new battleship since the end of the First World War. In the case of Italy they did not even complete their most modern design after the war, thus the building of large and fast battleships was something new to each party. Had the economic effects of the First World War been so difficult, and the following Great Influenza of 1918-1919 so devastating, all of the navies involved might have completed ships that would have influenced the next generation.

I have already published the final part which covers the German Scharnhorst Class entitled Power and Beauty the Battle Cruisers Scharnhorst and Gneisenau The German Bismarck, Japanese Yamato, British Vanguard and American Iowa Classes will be covered in a subsequent series.

The Washington Naval Treaty placed a limit on the displacement and armament of battleships. It also stipulated the tonnage of capital ships allowed for each Navy, as well as limits on the displacement of cruisers, and destroyers. The only country not effected by the treaty was Germany, which until 1935 was required to observe much stricter limitations than Great Britain, the United States, France, Italy, or Japan.

The Washington Naval Treaty led to the scrapping or cancellation of nearly all the super Dreadnoughts, and fast battleships, sometimes known as Battlecruisers of the United States, Great Britain, Japan, France, and Italy. However, its restrictions opened up the development of large aircraft carriers by the United States and Japan which each were allowed to complete two of their new battleships or Battlecruisers into aircraft carriers, specifically the IJN Akagi and Kaga, and the American USS Lexington and Saratoga.

The London Treaty continued the restrictions of the Washington Treaty which limited the displacement of new ships to 35,000 tons with the main battery being limited to 16” guns. Each of the treaty signatories as well as the Germans, who were bound by the much more stringent Treaty of Versailles restriction, endeavored to build to the limit of the treaty and if possible skirt the limitations in terms of displacement which allowed them to increase protection as well as more powerful engineering plants. The Germans, now Hitler’s Third Reich, were aided in this by a bi-lateral Naval Agreement with Britain in 1935. The treaty not only allowed them a legal way to avoid the Versailles restrictions and gain international respect.

The Royal Italian Navy, or the Regia Marina had not completed a battleship design since the Andria Doria Class which were constructed between 1912 and 1915. These ships were provided  an extensive modernization between 1937 and 1940.  The modernization allowed them to serve as first line ships throughout the war. A subsequent class the Francesco Caracciolo class was started during the First World War but no ships of the class were completed. Italy’s war debts, overall financial condition, as well as the similar situation of the French, Italy’s main rival in the Mediterranean Sea, ensured that the Regina Marina had little money for new ships or modernizing old ships during the 1920s and 1930s. Even the accession of Mussolini did little to help the Navy until the 1930s. Even then competing ideas of how to build a new Navy were present in the Italian Naval High Command. Some placed their emphasis on large numbers of battleships, others a mix of aircraft carriers, fast battleships, cruisers and destroyers, while other sought a middle ground.

However, the Italians were forced to act as in the 1930s a new naval arms race was underway in the Mediterranean. The French Navy had begun a new class of Fast Battleships, the Dunkerque class which were designed to defeat the German Deutschland class “pocket battleships” and the follow on Richelieu Class of fast battleships. Mussolini saw the new French ships as a threat to the his control of the Mediterranean, or as the Italians and their Roman ancestors called it Mare Nostrum (our Sea), and ordered the construction of a new class of battleships to help Italy achieve naval dominance in the Mediterranean.

The new ships were of a breathtaking design. They were  large, fast and heavily armed. While they were officially listed as meeting the prescribed treaty limit of 35,000 tons they actually would displace 41,177 tons standard displacement, and 45,963 tons full load. They were armed with a main battery of 9 15” L/50 guns in triple turrets. They had a secondary armament of 12 6” and 12 3.5” dual purpose guns, and a powerful light anti-aircraft battery of 20 37mm and 30 20mm anti-aircraft guns. They were capable of a top speed of 30 knots. Although they had a relatively short range of 3900 miles at 20 knots, they were formidable ships for operations in the constrained waters of the Mediterranean where they would not be required to operate at long ranges from Italian bases in Italy, Sicily, or Libya. They were well protected from shellfire, although their Pugliese torpedo defense system proved inferior to traditional designs, because it did not hold up well to direct hits, or close aboard explosions which resulted in massive flooding when hit by a torpedo or by a near miss from a heavy bomb or shell.

Their main armament though formidable was not without its flaws. The 15” guns had a very long range of 42 km or 26.6 miles and high muzzle velocity of 2900 fps. This meant that they had a long reach, however, their high muzzle velocity led to a barrel life of only about half that of their counterparts, and led to inconsistent shell fall patterns, which lessened to probability of hitting targets at long range. The guns also suffered from a slow rate of fire of only 1.3 rounds per gun a minute.

The Vittorio Veneto was laid down 1934 along with her sister the Littorio, and was launched on 25 July 1937. She was commissioned on 28 April 1940, barely a month before Italy declared war on France and Britain. She would see action numerous times and give a good account of herself against the British taking part in 56 war missions. She fought at the Battle of Cape Spartivento (Teulada) where she fired 19 salvos to drive off a 7 ship British cruiser squadron in a pitched battle that also included the battleship HMS Ramillies and battle cruiser HMS Renown. In 1941 she took part in the Battle of Cape Matapan where she was damaged by an aerial torpedo after driving off a British cruiser squadron. After repairs she was back in action and on 15 June 1942 participated in the Battle of Mid-June, where she and her sister ship Littorio successfully fenced off a large British convoy from Alexandria by their mere presence at sea.  She was also the first Italian battleship equipped with radar. She surrendered with the Italian fleet to the Allies on 8 September 1943 surviving furious German air attacks. She was interred at the Great Bitter Lakes in the Suez Canal. After the war she taken as war compensation and was returned to Italy and scrapped beginning in 1948.

Littorio (later Italia): Littorio was laid down in 1934 and launched on 22 August 1937 and commissioned on 6 May 1940.  She participated in 43 operations including the Battle of Sirte and several actions against British convoys.  Following the Battle of Mid-June she was struck by an aerial torpedo dropped by a Wellington bomber. She was repaired and upon the removal of Mussolini from power was renamed Italia and surrendered with the Italian Fleet on 8 September 1943 being damaged by a Fritz-X radio controlled bomb. With her sister the ex Vittorio Veneto, now Italia, she was interred in the Great Bitter Lake and was returned to Italy where she was decommissioned and scrapped beginning in 1948. 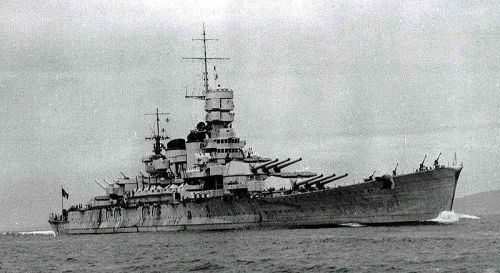 Roma was laid down 18 September 1938, launched on 9 June 1940 and commissioned 14 June 1942.  Despite her addition to the fleet she was not deployed due to a fuel shortage. She sailed with the Italian Fleet to surrender on 8 June under the guise of the fleet sailing to attack the Allied invasion fleet off Salerno. The Germans discovered the ruse and the Luftwaffe launched air attacks against the Italian Fleet. Luftwaffe Dornier Do-217s armed with Fritz-X radio controlled bombs attacked the fleet as it transited the Strait of Bonafacio.

Roma exploding after being hit by Fritz-X radio guided bomb

Roma was hit by two of the missiles the first which flooded two boiler rooms and the aft engine room.  She was hit again by a second Fritz-X which hit in the forward engine room causing catastrophicdamage. The explosions ignited the number two turret magazine blowing the turret off the ship and causing the ship to capsize and break in two. She sank, carrying 1255 of her crew including Admiral Carlo Bergamini to their death. Roma was the first ship sunk by a radio controlled bomb, the forerunner of our current air launched anti-ship missiles. In the years since, lightly constructed surface ships have not faired well against air or sea fired anti-ship missiles. 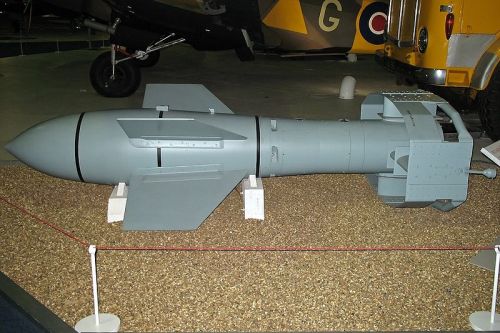 The fourth and final ship of the Class, Impero, was was laid down and launched, but never completed. When Italy surrendered the Germans used her incomplete hull as a target sinkinrn her. She was raised and scrapped after the war.

Impero Being Launched in 1939

The Vittorio Veneto class was a sound design and operationally successful against the Royal Navy. Her design was explored by the Soviet, Dutch, and Spanish navies in their attempts to build moderner battleships or battlecruisers, although none came to fruition. The fact that the two surviving ships, as well as the newest most modern were scrapped was a travesty as the Cold War began. Their loss left Italy with the remaining two Andrea Doria class battleships, completed in 1915 and 1916 as the battle force of the Italian Navy, until they were scrapped in the late 1950s and early 1960s.

The brave sailors of the Regina Marina who manned these fine ships should not be forgotten.

One response to “The Vittorio Veneto Class Battleships: The Pride of Italy and Victims of Changing Technology”