Two hundred and thirty five years ago, in the year 1786, the the legislature of the Commonwealth Of Virginia ratified a law written by Thomas Jefferson. It was the precursor to the Establishment and the Free Exercise Clauses Of the First Amendment to the Constitution of the United States.

It is the antithesis of, and the antidote to all theocratic movements, to include contemporary Christian Nationalism and it’s close cousin Christian Dominionism, or as it is sometimes called Seven Mountains Theology. The tragic thing is that despite their declining numbers the theocrats have continued to gain power and influence government policy over the last four years in way the framers would have opposed. Not only do this they attempt to threaten and shout down their opponents in the most unseemly manner. I have had to deal with one of these asshats over the past week.

Likewise I continue to discover that with few exceptions that if you are a minister that with few exceptions most ministers or chaplains will use you, abuse you and when done abandon you. Truthfully, most ministers are thin skinned, cowardly sonsofbitches who if you are a ministerial colleague will smile to your face as they plunge a dagger into your back, this is especially true of Christian ministers across the theological and political spectrum. They would rather make their beds with the powerful than care for the weak, broken, hurt, or damaged in their ranks. I know this from personal experience, the experience of my friends, and from numerous amounts of analytical and polling data, but I digress.

In the 1770s and 1780s Thomas Jefferson, James Madison, and their Virginia Baptist ally, John Leland understood the threat to a republic such as ours posed by religious theocrats of any type, to include Christians.

The Virginia statute was necessitated by militant Anglicans who desired to re-establish themselves as the state religion in Virginia and had gone about using physical violence against various dissenters, especially Virginia’s Baptist minority. It is fascinating, in a frightening and grotesque sense of the word to see Virginia Baptists like Jerry Falwell Jr., and other Evangelical leaders of the Free Church tradition, including Pat Robertson, Franklin Gresham, Paula White, Tony Perkins, John Hagee, Robert Jeffress, Rick Wiles, and a host of other contemporary theocrats interpreting Religious Freedom in a manner similar to the Anglicans of Virginia in the 1780s, or in the manner of all Christians who follow the path of Constantine.

Not all of these religious leaders are Baptists, but many are independents, charismatics, Pentecostals, and other conservative Evangelicals of many denominations have thrown their lot in the hat of theocracy and authoritarian rule.

“Constantine, the Emperor, saw something in the religion of Christ’s people which awakened his interest, and now we see him uniting religion to the state and marching up the marble steps of the Emperor’s palace, with the church robed in purple. Thus and there was begun the most baneful misalliance that ever fettered and cursed a suffering world…. When … Constantine crowned the union of church and state, the church was stamped with the spirit of the Caesars…. The long blighting record of the medieval ages is simply the working out of that idea.”

The Virginia Statute stood in complete opposition to theocratic minded Americans then, and now. The statute which I post below in its entirety is must reading for anyone who thinks that they understand what the founders of the United States believed about religious liberty: 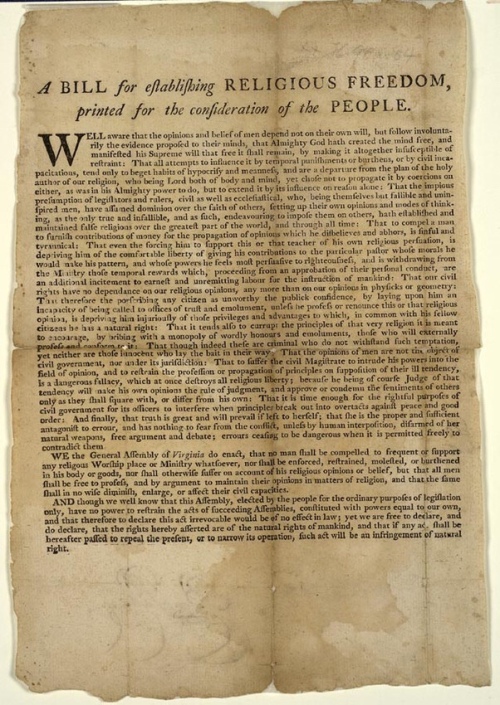 An Act for establishing religious Freedom

That all attempts to influence it by temporal punishments or burthens, or by civil incapacitations tend only to beget habits of hypocrisy and meanness, and therefore are a departure from the plan of the holy author of our religion, who being Lord, both of body and mind yet chose not to propagate it by coercions on either, as was in his Almighty power to do,

That the impious presumption of legislators and rulers, civil as well as ecclesiastical, who, being themselves but fallible and uninspired men have assumed dominion over the faith of others, setting up their own opinions and modes of thinking as the only true and infallible, and as such endeavouring to impose them on others, hath established and maintained false religions over the greatest part of the world and through all time;

That to compel a man to furnish contributions of money for the propagation of opinions, which he disbelieves is sinful and tyrannical;

That even the forcing him to support this or that teacher of his own religious persuasion is depriving him of the comfortable liberty of giving his contributions to the particular pastor, whose morals he would make his pattern, and whose powers he feels most persuasive to righteousness, and is withdrawing from the Ministry those temporary rewards, which, proceeding from an approbation of their personal conduct are an additional incitement to earnest and unremitting labours for the instruction of mankind;

That our civil rights have no dependence on our religious opinions any more than our opinions in physics or geometry,

That therefore the proscribing any citizen as unworthy the public confidence, by laying upon him an incapacity of being called to offices of trust and emolument, unless he profess or renounce this or that religious opinion, is depriving him injuriously of those privileges and advantages, to which, in common with his fellow citizens, he has a natural right,

That it tends only to corrupt the principles of that very Religion it is meant to encourage, by bribing with a monopoly of worldly honours and emoluments those who will externally profess and conform to it;

That though indeed, these are criminal who do not withstand such temptation, yet neither are those innocent who lay the bait in their way;

That to suffer the civil magistrate to intrude his powers into the field of opinion and to restrain the profession or propagation of principles on supposition of their ill tendency is a dangerous fallacy which at once destroys all religious liberty because he being of course judge of that tendency will make his opinions the rule of judgment and approve or condemn the sentiments of others only as they shall square with or differ from his own;

That it is time enough for the rightful purposes of civil government, for its officers to interfere when principles break out into overt acts against peace and good order;

And finally, that Truth is great, and will prevail if left to herself, that she is the proper and sufficient antagonist to error, and has nothing to fear from the conflict, unless by human interposition disarmed of her natural weapons free argument and debate, errors ceasing to be dangerous when it is permitted freely to contradict them:

Be it enacted by General Assembly that no man shall be compelled to frequent or support any religious worship, place, or ministry whatsoever, nor shall be enforced, restrained, molested, or burthened in his body or goods, nor shall otherwise suffer on account of his religious opinions or belief, but that all men shall be free to profess, and by argument to maintain, their opinions in matters of Religion, and that the same shall in no wise diminish, enlarge or affect their civil capacities. And though we well know that this Assembly elected by the people for the ordinary purposes of Legislation only, have no power to restrain the acts of succeeding Assemblies constituted with powers equal to our own, and that therefore to declare this act irrevocable would be of no effect in law; yet we are free to declare, and do declare that the rights hereby asserted, are of the natural rights of mankind, and that if any act shall be hereafter passed to repeal the present or to narrow its operation, such act will be an infringement of natural right.

“The notion of a Christian commonwealth should be exploded forever. … Government should protect every man in thinking and speaking freely, and see that one does not abuse another. The liberty I contend for is more than toleration. The very idea of toleration is despicable; it supposes that some have a pre-eminence above the rest to grant indulgence, whereas all should be equally free, Jews, Turks, Pagans and Christians.”

With that I bid you a good night, or maybe a troubling one. It all depends on ones perspective. I don’t say that lightly; but really, considering my vivid dreams, nightmares, and night terrors brought on by PTSD and a neurological condition that ensures that those dreams, nightmares, and terrors are acted out when I am in REM sleep, maybe it is a necessary step to healing.

If you value freedom those words may be hopeful; but if you don’t, they are a threat, a threat of unlimited government and religious power. The fact is, that all of us, regardless of our religious beliefs, or lack thereof must take them to heart when we proclaim our loyalty to the Constitution, and our belief in the First Amendment to it, if we don’t we actively proclaim our opposition to the ideals of our Founders, but I digress. The simple fact and problem is that authoritarians and theocrats hate the First Amendment, and have to twist it to ensure that only their rights are protected and enhanced. However, the Virginia Statute, and the First Amendment at meant by the Founders, threatens their desires of theocracy and unbridled state power, and so long as we believe it and fight for it, undermines their power. My friends, if you know history, that is not a bad thing. As John Emerich Edward Dalberg-Acton wrote: “Power tends to corrupt, and absolute power corrupts absolutely. Great men are almost always bad men…”,

Think about it, the police power of the state married to religion. For God’s sakes, we are not Iran, Saudi Arabia, the Taliban, the perverted Shinto of Imperial Japan, the Tsarist and Putin’s Russia, or any other state that relies on the unwavering loyalty of its religious majority, or powerful minority, to maintain power. In time they all come crashing down, as will Trump’s Cult.