Lies, Lawsuits, Threat of Domestic Terrorism and the 25th Amendment: Vice President Pence, Have You no Decency? 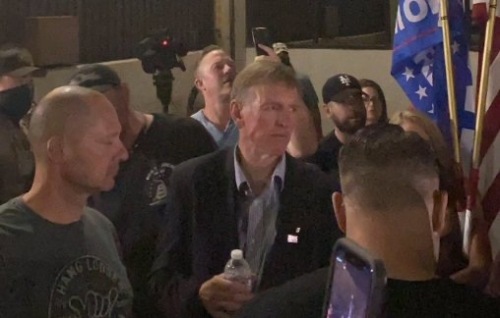 If Vice President Mike Pence had any decency, sense of right or wrong, or any hint that he was a Christian other than going to church and occasionally speaking in pious platitudes, he would invoke the 25th Amendment and with a majority of the Cabinet remove President Trump from office. It is the only way left for him to salvage any honor he has left and maybe save the country from bloodshed in the process. Unfortunately, I do not think that he has the moral courage to do so.

I say that because of the immense destructive potential remaining in Donald Trump. In addition to unleashing unsubstantiated lawsuits in states where the vote count is not yet final, he conducted a Press Conference in which he uttered so many lies and demonstrated falsehoods about the election that it was unreal. During it he also appeared to be urging his followers to violence.

Adding to that was his former 2016 campaign advisor and former White House Chief Strategist, Steve Bannon calling for the beheading of Dr. Anthony Fauci and FBI Director Christopher Wray, followed by putting their heads on pikes for public display. Bannon’s allegation was that they were traitors and deserved it.

Added to that was another conspiracy theory promoted by Trump, that of “Sharpiegate” which sent a mob to the Maricopa County vote counting center in Phoenix. Leading the charge was a Republican Arizona Congressman, Paul Goslar.

I am sorry but all of this is criminal behavior that President Trump is actively engaging.

When a President engages in such behavior it is an impeachable offense. Of course that will not happen right now, but Mitch McConnell and others need to push Vice President Pence to fulfill his duties under the Constitution. President Trump is incapable of leading the country in any crisis, and is leading the country to disaster. Today we had another 118,000 new infections of COVID-19 and over 1,100 deaths, we are close to 10 million infections, while many states are running out of ICU beds, hospital beds in general, and the doctors, nurses, clinicians and technicians. As for the President he ignores it, urges people to act in contradictory ways than anything that would protect them and speaks as if the virus will mysteriously just disappear. He is responsible for the deaths of 240,000 Americans. That my friends is criminal negligence or worse, I think crimes against humanity would be appropriate.

But enough is enough. It is time for this malfeasance to end. Right now Vice President Pence has it in his power to make it end. He is the only person who could legally do that right now. Unfortunately, he doesn’t have the moral courage to do it, nor does he have the character to do it.