Coming this Weekend: Biography and Heroism 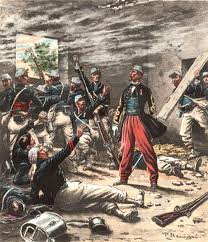 It has been a busy week. We had a wonderful niece of Judy visit us and work has been busy. Last night I was able to have dinner with two of my very few real friends in the Navy Chaplain Corps at a local restaurant after getting the results of the Neuron-psychological testing that I endured a couple of months ago.

The good news regarding the testing is that I don’t seem to have any issues dealing with a physical brain injury, but at the same time I have some increased deficits dealing with certain types of memory, recall, and processing speed. The doctor things this may be mostly due to dealing with PTSD, depression and sleep deprivation related to PTSD. I’ll probably go through one more battery of these tests before I retire in 2017 just to make sure that I don’t have what Denny Crane (William Shatner- Boston Legal) and I now refer to as “the Mad Cow” or Alzheimer’s or some other kind of dementia.

Since I am getting ready to lead another group of students to Gettysburg next Friday I will be publishing another of my biographic vignettes about the men who fought the battle. This time dealing with Confederate General John Bell Hood, a man who was outstanding as a brigade and division commander but who was complete failure at higher levels of command. I have some more Gettysburg material in the works but I don’t thing that I will post it until next week.

I will also be putting out an article about the French Foreign Legion at the battle of Cameron on April 30th. This is a fascinating story about a small unit of 65 men engaged in a hopeless battle on April 30th 1863 in Mexico just as the epic Battle of Chancellorsville was about to begin.

During the coming week I will be putting out some more Gettysburg articles as I get ready to take another group of students there next weekend, as well an article about another hopeless and sadly forgotten battle, that of Dien Bien Phu which came to its disastrous conclusion on May 7th and 8th 1954. Of course I am always ready to write about current events and issues as needed.

On another note I just finished the amazing book Team of Rivals: The Political Genius of Abraham Lincoln by Doris Kearns Goodwin. I think that this is a book that anyone interested in politics, people and our current political crisis need to read.

Have a great night and weekend.

Somehow I feel a bit like Danny the Donkey now. I am wiped out and I wouldn’t mind sitting around in my underwear drinking beer. sadly I am not a pretty sight in my tights whities, but then there are times when I think that I am ahead of my time.

Today I had a day long series of tests to see how my brain is working at the Neuro-Psychology clinic at the local Naval Medical Center. If you ever have cause to go through such a series, please know, even if you don’t drink you will want to when complete them. Thankfully, this was the last battery of tests of this sort that I will need to do. On the 23rd I get my special sleep study  which in addition to checking for possible sleep apnea also studies all of my crazy dreams and night terrors.

Last night I had a pretty bad night for sleep, lots of weird dreams and nightmares. I woke up exhausted and then went to my testing. So now I am even more wiped out. Thankfully tonight should be easy. Go home and spend time with Judy and the dogs. I think our new Papillon puppy, Izzy, is good for me. It looks like she is going to be daddy’s girl. I love playing with her and having her hang out with us. She is funny, smarter I think than any of our previous girls, and none of them were dumb dogs, very sweet, playful but totally laid back. It is like this little girl is an old soul.

Like I said, there is a lot that I want to write about. One thing is the latest GOP outrage with their letter to Iran. As a career military officer and former Republican I could never imagine any group of American politicians doing something so stupid and ultimately undermining of of our country. Not only was a it a lame attempt to sabotage the discussions that we and our allies are involved with before any deal is finalized, in a sense they added to the legitimacy of the Iranian clerics. If the Democrats had written a letter like this to Saddam Hussein in 2002 they would have been rightfully condemned, but evidently Senator Tom Cotton and 46 others thought this was a good idea, simply because they hate all things Obama. Instead they seem to be pushing for new, unfunded wars against not only Iran, but Iran’s mortal enemy the Islamic State. Guess what, if they get there way, these new wars will end badly. But the people are less rational than the Iranian Mullahs, so what can we expect?

There is yet another shit storm brewing between the religious right and the Navy Chaplain Corps. I promise that as I sort through the facts I will give you the fairest and most comprehensive report you will see on it. But for now I will simply say that from what I am reading this appears to be another incident involving a chaplain who might have overstepped his bounds but who’s cause is now all over the conservative blogosphere. From what I read there appears to be much more to the story than what is being reported on the Daily Caller, World Net Daily, the Blaze, Fox News, tons of other Right Wing Christian “news” sites and blogs or the website of lawyers supporting the agrieved chaplain are saying. Give me some time and you will get as truthful report as you will see on this.

I do have a number of Gettysburg related articles in process. Expect one one the cavalry actions of July 3rd and one on the suprises that George Meade and Robert E Lee experienced on June 28th 1863 within the week. I have some other ideas floating around and have much more to do on my Gettysburg text, so there will be more.

Finally there are a number of other subjects that I want to address, some dealing with history, some baseball, some military, and some current events and controversies. So my friends, please stay tuned and spread the word.