The Last Of the Carriers that Held the Line Found: USS Hornet Discovered 17,000 Feet Below the Pacific

The crew and research teams on the late Paul Allen’s research vessel, the RV Petrel made a tremendous maritime discovery in late January near where Hornet sank following massive damage sustained during the Battle Of the Santa Cruz Islands on October 26th 1942.

Hornet as Completed off Hampton Roads shortly after Her Commissioning

The USS Hornet CV-8 was the third ship of the Yorktown Class and is sometimes referred to as her own one ship Hornet Class.  Laid down on 25 September1939 under the Naval Expansion act of May 17th 1938, Hornet was part of the pre-war naval build up authorized by President and Congress.  The previous Yorktown design was used to speed construction.  Hornet was slightly modified from her sisters Yorktown and Enterprise being 15 feet longer, 5 feet wider in the beam and displacing about 1000 tons more than her near sisters.  Her anti-aircraft armament was also slightly improved.  As with her near sisters Hornet had good protection except that her underwater protection was weak.  However, as would be born out in combat Hornet like her sisters would prove to be extraordinarily tough.

Hornet in Rough Seas Preparing to Launch the Doolittle Raid

Hornet was launched on 14 December 1940 and commissioned 25 October 1941 with Naval Aviation pioneer Captain Marc A Mitscher Commanding. Hornet conducted her initial training and air group qualifications while operating out of Norfolk.  On February 2nd two Army Air Corps B-25 Medium Bombers were loaded aboard.  As Hornet put to sea the bombers were launched to the astonishment of the crew. Hornet departed Norfolk for the Pacific where she embarked 16 B-25s under the command of Colonel Jimmy Doolittle.  Hornet’s own air group was stowed in the hanger bay.  On April 2nd Hornet departed from San Francisco for a rendezvous with Admiral Halsey’s Task Force 16 and her sister ship Enterprise.  As the ship departed Mitscher informed the crew of their mission.  Hornet would launch Colonel Doolittle’s aircraft against the heart of the Imperial Japanese Empire, Tokyo.

The plan was for the task force to sail to 400 miles from Japan and launch the bombers. Enterprise  was to provide air cover for the task force while Hornet’s air group was inaccessible while the bombers remained aboard.  On the morning of 18 April the task force was spotted by a Japanese patrol boat.  The craft was quickly dispatched by the heavy cruiser USS Nashville  but not before the craft had reported the presence of the task force.  Though the task force was still 600 some miles from Japan Halsey ordered that Doolittle’s aircraft be launched against Tokyo.  The attack while militarily insignificant came as a major surprise to the Japanese who anticipating a raid by naval aircraft believed that any attack could not take place until the following day.  Even more significantly the attack stunned the Japanese military establishment, especially the Navy. The attack would provoke Admiral Yamamoto to attack Midway in order to draw out the American carriers and destroy them. 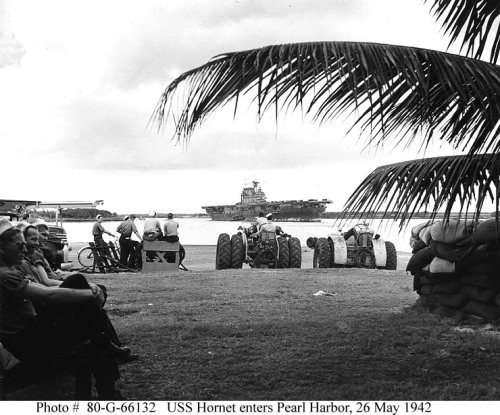 Hornet along with Task Force 16 sailed back to Pearl Harbor arriving a week later and the mission would remain secret for over a year.  The task force steamed to assist the Yorktown and Lexington at the Battle of Coral Sea but that battle was over before they could arrive.  The task force returned to Pearl Harbor on the 26th of May and sail on the 28th for Midway.  Hornet’s air group was plagued with bad luck.  Torpedo Squadron 8, or Torpedo 8 commanded by LCDR John Waldron found and attacked the Japanese task force losing all aircraft and all pilots save one.  6 new TBF Avengers from her air group operating from Midway met with heavy losses in their attack against the Japanese.  Only one pilot from Torpedo 8 with Waldron’s group survived, Ensign George Gay.  Hornet’s dive bombers followed bad reports of the location of the Japanese carriers and took no part in the action.  Many would have to ditch in the ocean as they ran out of fuel.  Hornet’s air group would help sink the Japanese Heavy Cruiser Mikuma and heavily damaged Mogami on the 6th.  The Battle of Midway was one of the major turning points of the war.  The Japanese had lost six carriers which had attacked Pearl Harbor along with their aircraft and many of their highly trained pilots and flight crews. Coupled with their losses at Coral Sea the Japanese suffered losses that they could ill afford and could not easily replace.

Following Midway Hornet had new radar installed and trained out of Pearl Harbor until order to the Southwest Pacific to take part in the struggle for Guadalcanal.  By the time she arrived she was the only operational American carrier in the Pacific. Enterprise had suffered bomb damage at the Battle of Easter Solomons on August 24th; Saratoga was damaged by a submarine torpedo on August 31stand the Wasp was sunk by a submarine on September 15th.  In the space of 3 weeks the United States Navy had lost 3/4ths of its operational carriers in the waters off of Guadalcanal. Hornet now faced the Japanese alone, providing much of the badly needed air support for the Marines fighting ashore. 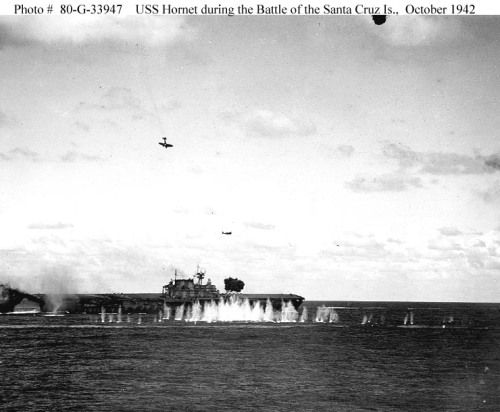 The Enterprise rejoined Hornet following hasty repairs off the New Hebrides Islands on October 24th.  On the 26th they joined battle with a Japanese task force of 4 carriers centered on the veterans Shokaku and Zuikaku. The Hornet’s aircraft attacked and seriously damaged Shokaku even as Japanese torpedo planes and dive bombers launched a well coordinated attack against Hornet. Hornet was hit by three bombs, two torpedoes and had two bomb laden Val dive bombers.  On fire and without power her damage control parties fought to regain control of the ship and extinguish the fires that blazed aboard her.

Assisted by the heavy cruiser Northampton which took her in tow her crew brought the fires under control and were close to restoring power when another Japanese strike group found her and put another torpedo into her.  This hit sealed the fate of Hornet. 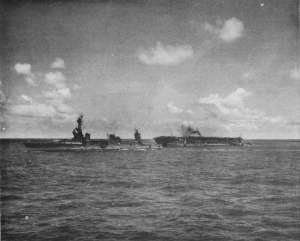 With this hit Hornet’s list increased and she was abandoned even as she was hit by another bomb.  With Japanese ships in the area it was decided to scuttle the ship. Escorting destroyers hit her with 9 torpedoes and over 400 rounds of 5” shells.  As Hornet blazed in the night her escorts withdrew and a Japanese surface force arrived. The destroyers Makigumu and Akigumo finished the heroic but doomed ship off with four of their 24” “Long Lance” torpedoes. She sank beneath the waves at 0135 hours on October 27th.

140 members of her crew went down with their ship.

Hornet Being Abandoned by Her Crew

In her last fight Hornet’s aircraft along with those of Enterprise mauled the air groups of Shokaku and Zuikaku, again inflicting irreplaceable losses among their experienced air crews.  In the battle Hornet  was hit by 4 bombs, two aircraft, 16 torpedoes and over 400 rounds of 5” shells, more hits than were sustained by any other US carrier in a single action during the war.  She was stuck from the Navy list on 13 January 1943 and her gallant Torpedo 8 was awarded the Navy Presidential Unit Citation “for extraordinary heroism and distinguished service beyond the call of duty” in the Battle of Midway.  Her name was given to the Essex Class carrier CV-12.

The new Hornet served throughout the war and served well into the Cold War.  She now rests as a Museum ship at Alameda California. There is currently no Hornet in commission today. With two new Gerald Ford Class carriers approved, one to be named Enterprise, it might be a a good thing to name the next of the class Hornet.

The Museum site is here: http://www.uss-hornet.org/