Today was my time to take my Physical Readiness Test for the Navy.  I actually think that we call it a PFA or Physical Fitness Assessment, but nonetheless it is what in the old days we simply called a “PT Test.”  I have to say that I think that I did okay, despite a conscious decision not to push myself too hard and “strive for mediocrity” for the first time in my Navy career.  You will of course see that I had good reasons for this and that I wasn’t slacking too bad all things considered.

Now I have been doing PT tests  in one way shape or form for almost 28 years.   I started them back when I enlisted in the National Guard and concurrently began Army ROTC at UCLA back in 1981.  Back then the PT test was known as the Army Physical Fitness Test, or APFT.  It consisted then of push ups, sit ups and a 2 mile run and remained that way through my entire Army career.  As a young guy  I was good at the 2 mile run and killed the sit ups. Unfortunately the Army did and still does sit ups the worst way imaginable for your lower back.  You go all the way up and down and keep your hands behind your neck.   In the Army I usually did pretty good on the PT test but initially struggled with push ups.  I had not yet learned the importance of good form and was always psych’d out by them. Thus my scores for the push ups while satisfactory always dragged my overall score down. I finally started getting where I could just about reach the maximum for my age when the Army renamed the test and increased the numbers required to get the maximum score.  The new name was the Army Physical Readiness Test or APRT and the push up numbers went way up from 67 to I think it was 88 for the maximum score.  That sucked, I finally got where I could achieve the maximum and they raised the bar.  So for the rest of my Army career I pretty much resigned myself to the lower score despite doing what was previously the maximum number of push ups.

Then after 17 1/2 years in the Army I went over to the Navy.  I had to do the PRT, or the Physical Readiness Test.  The Navy test is similar to the Army but different.  I don’t know what the Army does now, except that they still do the push ups, sit ups and 2 mile run.  The Navy does push ups, curl ups and a mile and a half run.  The Navy numbers even at my age of 49 to get a “Outstanding” score are more than anything I had to do at a younger age in the Army.  The one and a half mile run is harder for me than the 2 mile run.  I am a distance runner.  When I am healthy, which I really have  not been since Iraq I run 5-8 miles.  Now I’m doing 3-4, not bad, but not what I want.  Just a few years ago I was doing half-marathons.  So a mile and a half to me is a sprint.  To get the maximum score I need to light the afterburners.  However after a lot of years of doing these things I have learned all about form and the nuances of how to do well, even the run, which when I am not injured a I can do in 10:00 to 10:00.  Not bad for an old guy.  When I was  at  EOD Group Two before I went to Iraq my RP2, Nelson Lebron and I smoked the test.  Afterward one of the EOD techs kiddingly asked Nelson “Dude, what kind of ‘roids is the chaplain on?”  The fact is that I love doing well and beating the young guys.  It has become a personal challenge.  Part of this is because I’m not young, and the other is I remember so many Army Chaplains who were physical wrecks who looked bad in uniform and had really poor physical conditioning.  Now there were fit chaplains but there were enough of the others to make the Corps look bad.  As a professional officer as well as a priest, I am 100% officer and 100% priest.  Kind of  a hypostatic union kind of thing going on here.

Now in addition to the Navy I have served two Fleet Marine Force tours and have my Fleet Marine Force Officer Qualification pin.  Part of the joy of serving with the Marines as a Navy Officer is getting to do their physical fitness test as an option to the Navy.  The Marines use pull ups instead of push ups, curl ups and a 3 mile run.  The run is actually my favorite of the three services.  My first mile is my warm up.  I hit my stride in the second and smoke the third.  I had to work hard at the pull ups but got where I could do enough to pass the Marine PFT with a “Class One” score.  The Marines have three levels of passing, Class one, two and three.  The Marines have recently added a Combat Fitness Test with all sorts of really tough stuff that guys might have to do in combat.  It does not look fun. 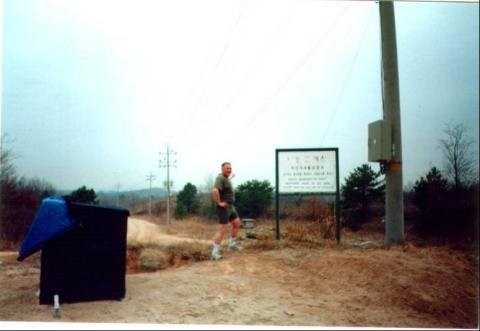 The penalty for failing the PT test in the Army, Marines or Navy is tough.  It can stop promotion or even get one kicked out of the service.  Height and weight standards too are important.  You don’t want to be flagged as overweight.  If you fail the PT test or bust the weight or body fat you get to go on some form of remedial PT which is usually in addition to everything else that you have to do.  I am genetically undertall and I really have to watch this.

Today I had my Spring PRT or was we call them now the PFA.  The events haven’t changed but the name has been changed to protect the innocent.  As I said I have had a lot of nagging injuries returning from Iraq, coupled with my PTSD and insomnia made the past year or so pretty hard.  I came back from Iraq and continued to push myself and while getting my usual “Outstanding” score made my injuries worse.  Shoulder problems kept me from the push ups for the first time in my career.  I had mildly sprained my left ankle running last week.  So I decided today that I would simply shoot for an “Excellent” score.  The Deity Herself was with me this morning despite being dinged up. After I drank my 24 once cup of Southern Pecan coffee with a healthy dose of Splenda and French Vanilla creamer from “The Dancing Goat”  and an el cheapo chocolate donut I did 75 push ups in about a minute and a half and stopped, I knew I had 10 or 15 more in me but decided to strive for mediocrity.  The run I decided to set an 8 minute mile pace and not get too excited completing the run in 11:56.  This is the worst time I have ever did the run in since I joined the Navy.  However I finished 3rd of the 25 or so sailors doing the run.   In the fall I hope to be fully spun up and really ready to embarrass the young guys.  Until then I will celebrate tomorrow when I come off of duty with donuts, hot and fresh Krispy Kreme donuts with coffee.  Back to the ICU.

Note: I have absolutely no idea what the Air Force does.  I think though that their PT test includes a round of golf, and time at the 19th hole.