French POWs from Dien Bien Phu being marched into captivity

On May 8th 1954 the French garrison of Dien Bien Phu surrendered to the Viet Minh.  It was the end of the ill-fated Operation Castor in which the French had planned to lure the Viet Minh Regulars into open battle and use superior firepower to decimate them.  The strategy which had been used on a smaller scale the previous year at Na Son.

The French had thought they had come up with a template based on Na Son in how to engage and destroy the Viet Minh.  The plan was called the “Air-land base.”  It involved having strong forces in a defensible position deep behind enemy lines supplied by air.  At Na Son the plan worked as the French were on high ground, had superior artillery and were blessed by General Giap using human wave assaults which made the Viet Minh troops fodder for the French defenders.  Even still Na Son was a near run thing for the French and had almost no effect on Viet Minh operations elsewhere while tying down a light division equivalent and a large portion of French air power.

The French took away the wrong lesson from Na-Son and repeated it at Dien Bien Phu.  The French desired to use Dien Bien Phu as a base of operations against the Viet Minh.  Unfortunately the French chose badly. The elected to occupy a marshy valley surrounded by hills covered in dense jungle.  They elected to go light on artillery and the air head was at the far end of the range of French aircraft, especially tactical air forces which were in short supply.  Likewise French logistics needs were greater than the French Air Force and American contractors could supply.  French positions were exposed and not mutually supporting.  The terrain was so poor that French units were incapable of any meaningful offensive operations against the Viet Minh.  As such they could only dig in and wait for battle.  Even so many positions were not adequately fortified and the artillery was exposed. The French garrison was a good force.  It was comprised of Airborne units, Foriegn Legion, Colonials (Marines), North Africans and Vietnamese troops.  Many of the officers including LtCol Langlais and Major Bigeard commander of the 6th Colonial Parachute Battalion were among the best leaders in the French Army. Others who served in Indo-China including David Galula and Jaques Trinquier would write books which would help Americans in Iraq.  Unfortunately the French High Command badly underestimated the capabilities and wherewithal of the Giap and his divisions.

Giap rapidly concentrated his forces and built excellent logistics support.  He placed his artillery in well concealed and fortified positions which could use direct fire on French positions. Giap also had more and heavier artillery than the French believed him to have.  Additionally he brought in a large number of anti-aircraft batteries whose positions enabled the Viet Minh to take a heavy toll among French Aircraft.  Giap also did not throw his men away in human assaults.  Instead he used his Sappers (combat engineers) to build protective trenches leading up to the very wire of French defensive positions.  In time these trenches came to resemble a spider web.

Without belaboring this post the French fought hard as did the Viet Minh.  Many French positions were overwhelmed by accurate artillery and well planned attacks.  The French hoped for U.S. air intervention, even the possibility of using nuclear weapons against the Viet Minh.  The were turned down.  Relief forces were unable to get through.  The garrison died, despite the bravery of the Paratroops and Legionaries.  The French garrison was let down by their high command and their government and lost the battle due to inadequate logistics and air power.  The survivors endured a forced march of nearly 400 miles by foot to POW camps in which many died.  Many were subjected to torture and group discipline.  Few French caved to the Viet Minh interrogations but some would come away with the belief that one had to use such means to fight the revolutionaries.  French and their Algerian comrades would apply this lessons against each other within a year of their release.  French soldiers and officers were shipped from Indo-China to Algeria to wage another protracted counterinsurgency.  Militarily they had all but won that war when their government pulled out. French troops, especially the Legionaries and Paratroops felt betrayed by their nation, much like many Vietnam Vets felt about the United States government after that war.  I find today that both our government and people are caring for our returning troops in a far better manner than the past.  Even still the veterans of Iraq and Afghanistan share almost a spiritual link to our American and French brothers in arms who fought at Dien Bien Phu, the Street Without Joy and places like Khe Sanh, Hue City, the Ia Drang and the Mekong. 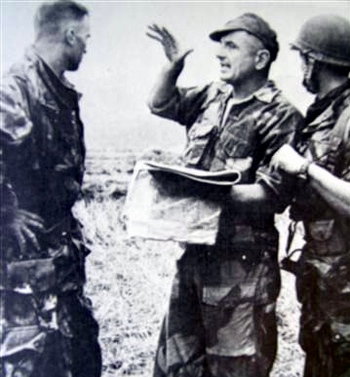 The lessons of the French at Dien Bien Phu and in Indo-China were not learned by the United States as it entered Vietnam.  In fact the US Army made a conscious effort to ignore the advice of those that they called  “losers.”  It was an arrogance for which we paid dearly, Despite the efforts of General David Petreus and others these lessons have not been completely learned by western military organizations.  Old habits die hard, counterinsurgency done right isn’t sexy.  Despite a lot of institutional resistance from traditionally minded officers we have, thanks to General Petreus had a good amount of success in Iraq. I believe that Iraq will do okay in the long run.  Someday I hope to take up the invitation of Iraqi friends to go back. I am concerned about Afghanistan. It  has the potential to be Vietnam in the mountains.  I do hope and pray that we will figure Afghanistan out.  Will there be a situation where an isolated NATO garrison is overrun?  One would hope not, but we cannot underestimated the Afghans and their ability to adapt to NATO tactics and weapons. A year or so ago the Taliban came close to overrunning an American Coalition Outpost (COP).   Dien Bien Phu is a warning from history not to leave troops in places where their exposure leaves them vulnerable.

Last night at the ball game, Ray and Bill, the Vietnam vets who man the beer stand on the concourse behind home plate gave me a small memento.  A small wooden coming from the Virginia Chapter of the Vietnam Veterans of America.  On the back side a simple message: “Welcome Home.”  Something that they did not get when they came home.  My dad came home in 1974 after back to back 11 month deployments, one of which he was at An Loc, besieged for 80 days.  He never talked about it.  I go home next week.  My dad is slowly dying and doesn’t have that much longer left, his physician cannot believe that he is still alive.  I have to help my mom with funeral arrangements, some hospice stuff, billing issues with the insurance company and the nursing home.  My dad had expressed his desire to be buried at sea in the Gulf of Tonkin.  He told my brother he wanted this because it had the most beautiful sunsets he had ever seen.  I do hope that we can fulfill that wish.  As a Navy Chaplain I know I can work out the burial at sea, and pray that somehow I will be able to take him where he wants to go.

Thank you dad.  Thank you Ray and Bill and all my Vietnam era friends and mentors, from the California Guard, SSG Buff Rambo, SSG Mickey Yarro and Colonel Edgar Morrison.  Thanks also to SFC Harry Zilkan, SFC Harry Ball, 1st Sergeant Jim Koenig, Colonel Donald Johnson and Sergeant Major John Butler.  I especially thank my former parishioners at the Fort Indiantown Gap Chapel.  Charlie, Ray, General Smoker, Scotty and the rest of you.  Thanks also to my Battle of Hue City brothers, Barney, Limey, General Pace, Sergeant Major Thomas.  Thank you also to the French officers who did so much for their country and were treated so shamefully.  A number of these men have passed on but I will not forget them.  Others I have lost contact with. Please take the time to thank the Vietnam, Iraq and Afghanistan veterans in your lives.  May no other veterans have to endure what all of you endured at the hands of your countrymen. May God bless all of you.