Power and Beauty the Battle Cruisers Scharnhorst and Gneisenau

The naval architects of Germany in the early 1930s designed some of the most beautiful as well as deadly warships of the Second World War.  Following Germany’s rejection of the provisions of the Treaty of Versailles the Kreigsmarine enacted a building program to enlarge and modernize the German Navy which then was composed of obsolete pre-Dreadnaught battleships and a few modern light cruisers and destroyers.   The first major units constructed were actually begun by the predecessor to the Kreigsmarine, the Reichsmarine of the Weimar Republic.  These were the Deutschland class Armored Ships, sometimes called “Pocket Battleships” and later reclassified as Heavy Cruisers. These ships were designed to replace the old pre-Dreadnaught battleships and incorporated electric welds to reduce displacement, diesel engines for extended cruise range to enable them to serve as commerce raiders and a battery of six 11” guns.  While an advance over anything in the German inventory they were outclassed by the British battle cruisers Hood, Renown and Repulse.

The next and first truly capital ships built by the Kriegsmarine were the Scharnhorst and Gneisenau battleships which in reality were battle cruisers because of their light main battery of 11” guns as opposed to the 14”, 15” or 16” batteries of other nations battleships.  Despite this in displacement and armor protection of the ships was comparable to other battleships of the era and their designed speed of 31.5 knots was superior to almost all other battleships of the era including the British King George V Class and the US North Carolina class.  Only the British Hood was their superior in speed.

As built they displaced 31,000 toms, however at full combat load they both weighed in at nearly 38,000 tons and were 772 feet long.  They had an armor belt that was nearly 14 inches thick.  Armed with a main battery of nine 11” guns and a secondary armament of twelve 5.9 inch guns they also mounted a powerful for the time anti- aircraft battery of fourteen 4.1 inch guns, 16 37mm and 16 20mm anti-aircraft cannons.  Additionally they mounted six 21” torpedo tubes and carried three Arado 196 A3 scout planes.  The main battery was eventually to be replaced by six 15” guns but this never occurred although Gneisenau was taken in hand to mount the new weapons but the conversion was never completed. 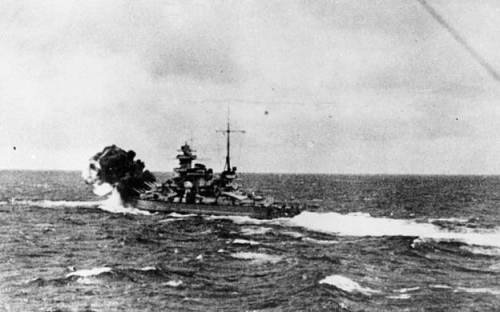 Scharnhorst in Action Against HMS Glorious

Laid down on 15 June 1935 and launched 3 October 1936 Scharnhorst was commissioned 7 January 1939.  Her sister Gneisenau was laid down 6 May 1935, launched 8 December 1936 and commissioned 21 May 1938.  Upon the commencement of the Second World War the two sisters began a reign of destruction on British shipping. In November they sank the Armed Merchant Cruiser HMS Rawalpindi During Operation Weserübung the pair surprised sank the aircraft carrier Glorious and her two escorting destroyers, the only time a Fleet carrier was caught and sunk by battleships during the war.   From January to March 1941 they conducted Operation Berlin against British merchant shipping in the North Atlantic sinking 22 ships before returning to base.

While in the port of Brest Gneisenau was bombed and torpedoed requiring extensive repairs.  Due to the exposed location of the port the German high command decided to return the ships to Germany along with the Heavy Cruiser Prinz Eugen.  This was Operation Cerberus and it took place from 11-13 February 1942 and involved the ships making a dash up the English Channel which was unsuccessfully contested by the British Royal Air Force and Royal Navy although both Scharnhorst and Gneisenau were damaged by mines and needed subsequent repairs.  While undergoing repairs in Kiel Gneisenau was further damaged by the Royal Air Force requiring repairs in or to steam to the port of Gotenhafen for repair and conversion.  Although some work was completed she was decommissioned and sunk as a blockship on 23 March 1945.  Following the war she was raised by the Poles and scrapped.

Scharnhorst was repaired following Operation Cerberes and in March 1943 was transferred to Norway where along with Tirpitz, Admiral Scheer, Lutzow (the former Deutschland), Admiral Hipper and Prinz Eugen she became part of a “fleet in being” poised to strike the Allied convoys bound for Russia. On Christmas Day 1943 under the command of Rear Admiral Erich Bey the Scharnhorst set sail with several destroyers undertook Operation Ostfront and the ensuing battle became known as the Battle of North Cape. This was to be an attack on two Russia bound convoys; however the orders were intercepted and decoded by the British which allowed Scharnhorst to be intercepted by the battleship HMS Duke of York four cruisers and a number of destroyers as she closed with the convoy after Bey had detached his escorting destroyers.  While attempting to escape she received damage that impacted her speed and maneuvering capabilities and was sunk with the loss of all but 36 of her 1968 man crew.  Her wreck was discovered 3 October 2000 some 70 miles north of North Cape Norway.

Thus ended the careers of two of the most beautiful ships to grace the seas, though their careers were short they both survived frequent heavy battle damage to return and fight again.  Perhaps their greatest weakness was the inability of the German Navy to provide them adequate escort and the Luftwaffe being unable to protect them against air strike while in port.