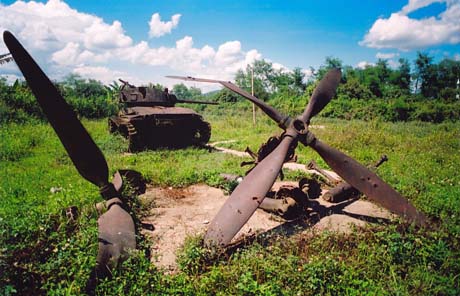 It was an epic battle in a tragic war and most people neither know or care what happened in the valley where a small border post named Dien Bien Phu became synonymous with forgotten sacrifice. This year fewer remembrances are taking place. Some are in Vietnam and others in France.

On May 7th 2011 in Hanoi a small remembrance was held to mark the fall of Dien Bien Phu and honor the victor, 101 year old General Vo Nguyen Giap at his home. Giap is the last senior commander of the war alive at 103 he remains active. That 2011 ceremony was one of the few remembrances held anywhere marking that battle which was one of the watersheds of the 20th Century. A half a world away in Houston Texas a small group of French veterans, expatriates and historians laid a wreath at the Vietnam War Memorial.  In Paris an ever shrinking number of French survivors gather each year on May 7th at 1815 hours for a religious service at the Church of Saint Louis des Invalides to remember the dead and missing of the French Expeditionary Corps lost in Indochina. A small number of other small ceremonies have been held this year.

This battle is nearly forgotten by time even though it and the war that it symbolized is probably the one that we need to learn from before Afghanistan becomes our Indochina.

On May 8th 1954 the French garrison of Dien Bien Phu surrendered to the Viet Minh.  It was the end of the ill-fated Operation Castor in which the French had planned to lure the Viet Minh Regulars into open battle and use superior firepower to decimate them.  The strategy which had been used on a smaller scale the previous year at Na Son.

The French had thought they had come up with a template for victory based on their battle at Na Son in how to engage and destroy the Viet Minh. The plan was called the “Air-land base.”  It involved having strong forces in a defensible position deep behind enemy lines supplied by air.  At Na Son the plan worked as the French were on high ground, had superior artillery and were blessed by General Giap using human wave assaults which made the Viet Minh troops fodder for the French defenders.  Even still Na Son was a near run thing for the French and had almost no effect on Viet Minh operations elsewhere while tying down a light division equivalent and a large portion of French air power. 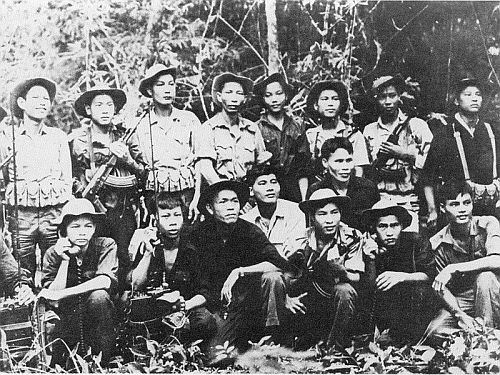 The French took away the wrong lesson from Na-Son and repeated it at Dien Bien Phu.  The French desired to use Dien Bien Phu as a base of operations against the Viet Minh.  Unfortunately the French chose badly. The elected to occupy a marshy valley surrounded by hills covered in dense jungle. They elected to go light on artillery and the air head was at the far end of the range of French aircraft, especially tactical air forces which were in short supply.  To make matters worse the General Navarre, commander of French forces in Indochina informed that the French government was going to begin peace talks and that he would receive no further reinforcements elected to continue the operation.

Likewise French logistics needs were greater than the French Air Force and American contractors could supply.  French positions at Dien Bien Phu were exposed to an an enemy who held the high ground and were not mutually supporting. The terrain was so poor that French units were incapable of any meaningful offensive operations against the Viet Minh. As such they could only dig in and wait for battle. Despite this many positions were not adequately fortified and the artillery was in exposed positions.

The French garrison was a good quality military force composed of veteran units. It was comprised of Paras, Foreign Legion, Colonials (Marines), North Africans and Vietnamese troops. Ordinarily in a pitched battle it would have done well, but this was no ordinary battle and their Viet Minh opponents were equally combat hardened, well led and well supplied and fighting for their independence.

Many of the French officers including Lieutenant Colonel Langlais and Major Marcel Bigeard commander of the 6th Colonial Parachute Battalion were among the best leaders in the French Army. Others who served in Indochina including David Galula and Roger Trinquier would write books and develop counter-insurgency tactics which would help Americans in Iraq. Unfortunately the French High Command badly underestimated the capabilities and wherewithal of the Giap and his divisions. 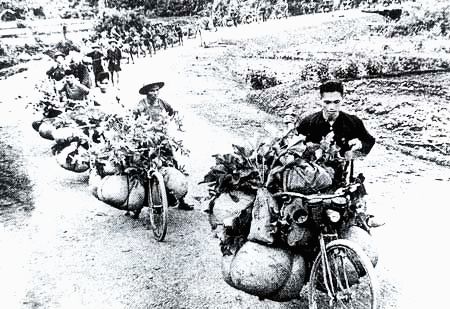 Giap rapidly concentrated his forces and built excellent logistics support.  He placed his artillery in well concealed and fortified positions which could use direct fire on French positions. Giap also had more and heavier artillery than the French believed him to have.  Additionally he brought in a large number of anti-aircraft batteries whose positions enabled the Viet Minh to take a heavy toll among French Aircraft.  Giap also did not throw his men away in human assaults.  Instead he used his Sappers (combat engineers) to build protective trenches leading up to the very wire of French defensive positions.  In time these trenches came to resemble a spider web.

Without belaboring this post the French fought hard as did the Viet Minh. One after one French positions were overwhelmed by accurate artillery and well planned attacks.  The French hoped for U.S. air intervention, even the possibility of using nuclear weapons against the Viet Minh. They were turned down by a US Government that had grown tired of a war in Korea. 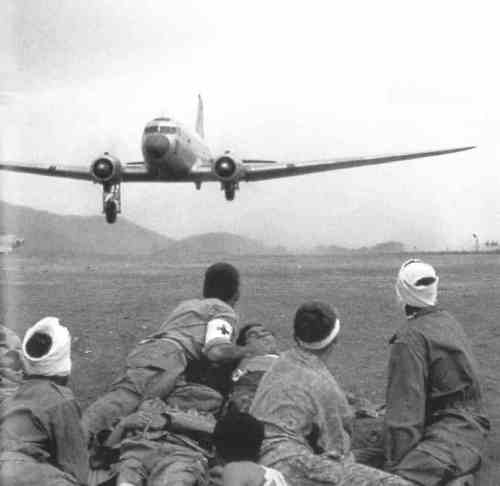 Relief forces were unable to get through and the garrison died, despite the bravery of the Paratroops. Colonials and Legionaries. The French garrison was let down by their high command and their government and lost the battle due to inadequate logistics and air power. The survivors endured a brutal forced march of nearly 400 miles on foot to POW camps in which many died. Many soldiers who survived the hell of Dien Bien Phu were subjected to torture, including a practice that we call “water boarding.” General Georges Catroux who presided over the official inquiry into the debacle at Dien Bien Phu wrote in his memoirs: “It is obvious that there was, on the part of our commanding structure, an excess of confidence in the merit of our troops and in the superiority of our material means.”

Few French troops caved to the Viet Minh interrogations and torture but some would come away with the belief that one had to use such means to fight the revolutionaries.  Some French troops and their Algerian comrades would apply these lessons against each other within a year of their release. French soldiers and officers were shipped directly from Indochina to Algeria to wage another protracted counterinsurgency often against Algerians that they had served alongside in Indochina. The Algerian campaign proved to be even more brutal and it was lost politically before it even began.

The March to Captivity

The wars in Indochina and Algeria tore the heart out of the French Army. The defeats inflicted a terrible toll. In Indochina many French career soldiers felt that the government’s “lack of interest in the fate of both thousands of missing French prisoners and loyal North Vietnamese…as dishonorable.” Divisions arose between those who served and those who remained in France or Germany and created bitter enmity between soldiers. France would endure a military coup which involved many who had fought in Vietnam and Algeria. Having militarily won that war these men called The Centurions by Jean Lartenguy had been turned into liars by their government.  They were forced to abandon those who they had fought for and following the mutiny, tried, imprisoned, exiled or disgraced. Colonial troops who remained loyal to France were left without homes in their now “independent” nations. They saw Dien Bien Phu as the defining moment. “They responded with that terrible cry of pain which pretends to free a man from his sworn duty, and promises such chaos to come: ‘Nous sommes trahis!’-‘We are betrayed.’

The effects of the wars in French Indochina, Algeria and Vietnam on the French military establishment were long lasting and often tragic. The acceptance of torture as a means to an end sullied even the hardest French officers. Men like Galula and Marcel Bigeard refused to countenance it, while others like Paul Aussaresses never recanted.

One of the most heart rending parts of the Dien Bien Phu story for me is that of Easter 1954 which fell just prior to the end for the French:

“In all Christendom, in Hanoi Cathedral as in the churches of Europe the first hallelujahs were being sung. At Dienbeinphu, where the men went to confession and communion in little groups, Chaplain Trinquant, who was celebrating Mass in a shelter near the hospital, uttered that cry of liturgical joy with a heart steeped in sadness; it was not victory that was approaching but death.” A battalion commander went to another priest and told him “we are heading toward disaster.” (The Battle of Dienbeinphu, Jules Roy, Carroll and Graf Publishers, New York, 1984 p.239)

As a veteran of Iraq whose father served in Vietnam I feel an almost a spiritual link to our American and French brothers in arms who fought at Dien Bien Phu, the Street Without Joy, Algiers and places like Khe Sanh, Hue City, the Ia Drang and the Mekong. When it comes to this time of year I always have a sense of melancholy and dread as I think of the unlearned lessons and future sacrifices that we may be asked to make. 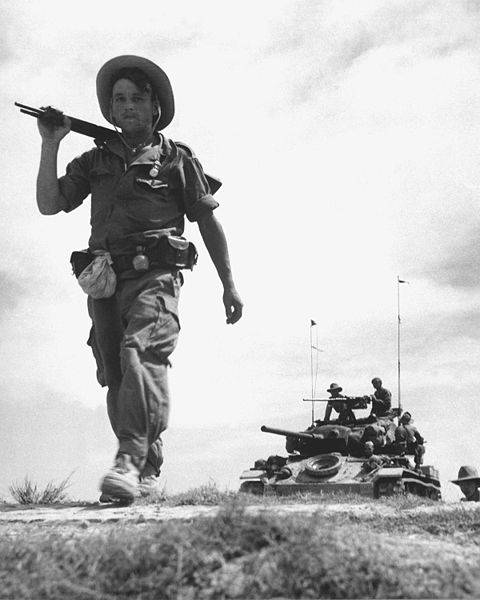 Legionairs on the Street Without Joy

The lessons of the French at Dien Bien Phu and in Indochina were not learned by the United States as it entered Vietnam, Iraq or Afghanistan. Nor were the lessons of Algeria. It was an arrogance for which we paid dearly and I do not think that many in our political, media and pundits or military have entirely learned or that we in the military have completely shaken ourselves. We lost 54,000 dead in Vietnam, nearly 4500 in Iraq and close to 2600 in Afghanistan, not counting vast numbers of wounded. There are those even as we have been at war for 12 years who advocate even more interventions in places that there is no good potential outcome, only variations on bad. How many more American Soldiers, Sailors, Marines and Airmen will need die without “victory” whoever we might want too define it?

Like the French our troops who returned from Vietnam were forgotten.The U.S. Army left Vietnam and returned to a country deeply divided by the war. Vietnam veterans remained ostracized by the society until the 1980s. As Lieutenant General Harold Moore  who commanded the battalion at the Ia Drang immortalized in the film We Were Soldiers recounted “in our time battles were forgotten, our sacrifices were discounted, and both our sanity and suitability for life in polite American society were publicly questioned.”

For those interested in the French campaign in Indochina it has much to teach us. Good books on the subject include The Last Valley by Martin Windrow, Hell in a Very Small Place by Bernard Fall; The Battle of Dienbeinphu by Jules Roy; and The Battle of Dien Bien Phu- The Battle America Forgot by Howard Simpson. For a history of the whole campaign, read Street Without Joy by Bernard Fall. I always find Fall’s work poignant, he served as a member of the French Resistance in the Second World War and soldier later and then became a journalist covering the Nuremberg Trials and both the French and American wars in Vietnam and was killed by what was then known as a “booby-trap” while covering a platoon of U.S. Marines.

I do pray that we will learn the lessons before we enter yet another hell.

5 responses to “Remembering Hell: The Fall of Dien Bien Phu 59 Years Gone by and Still Forgotten”