The NSA Leaks, Star Trek the Next Generation and the War on Terror: Revisiting the Drumhead

“But she, or someone like her, will always be with us, waiting for the right climate in which to flourish, spreading fear in the name of righteousness. Vigilance, Mister Worf – that is the price we have to continually pay.” Captain Lean Luc Picard to LT Worf in “The Drumhead”

Back in 1991 when I was still in seminary I spent every Saturday evening glued to my television set to watch Star Trek the Next Generation.  Even today I enjoy watching the human drama that Gene Roddenberry and his cohorts created on the small screen.  Of all the Star Trek series my favorites are TNG and Deep Space Nine. Those series often touched on very pertinent social, political, medical, and technological and dare I say national security issues. In fact I have used some Deep Space Nine episodes in my previous posts about the NSA leak situation and the War on Terrorism.

One of the most chilling episodes regarding national security and potential terrorism or sabotage is called “The Drumhead.” In light of the current charges and counter charges around the NSA leaks, Edward Snowden, the Boston Marathon bombing and the overt politicization of the terrorist attack on the US Consulate in Benghazi Libya it is an episode that remains especially pertinent. 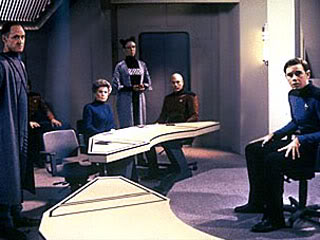 The episode is about an investigation that takes place on the Enterprise following an explosion in its engineering spaces.  Suspicion centers on a Klingon exchange officer but the investigator, the retired Starfleet Judge Advocate General a woman named Nora Satie and her Betazed assistant soon casts a wide net which eventually brings charges against a crew member and eventually Captain Picard.

At first Admiral Satie’s investigation seems reasonable. After all the Federation was in danger and there was a possibility that Flagship of Starfleet was sabotaged and there was the possibility that the Klingons or others might be involved.  Thus as she began her investigation she was welcomed by the Captain as well as the Security Chief, Lieutenant Worf, the only Klingon serving as a Starfleet officer.  Satie investigation which is assisted by Enterprise officers find out how the Klingon scientist smuggled classified information off the Enterprise.

Lieutenant Commander LeForge determines in his investigation that the explosion thought to be “sabotage” was caused by a flaw in a recently replaced dilithium chamber.  Although convinced that the Klingon is not the saboteur Satie is convinced that another saboteur is aboard the Enterprise.  Satie and her assistant uncover a piece of information that a crewman lied about his family background on his enlistment contract. They then use it to attempt to connect the crewman to to the Klingon spy by supplying false information about the explosion in an attempt to get the crewman to admit guilt. 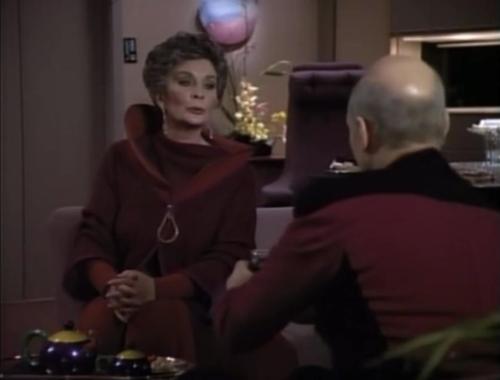 As the investigation widens Picard discusses it with Lieutenant Worf. I find this dialogue to be quite relevant to today in the twelfth year of the War on Terror and the passage of the Patriot Act.

Lieutenant Worf: “Sir, the Federation does have enemies. We must seek them out.”
Captain Jean-Luc Picard: “Oh, yes. That’s how it starts. But the road from legitimate suspicion to rampant paranoia is very much shorter than we think. Something is wrong here, Mister Worf. I don’t like what we have become.”

When Picard objects to the grilling of the crewman, Admiral Satie and her chief assistant begin an investigation of Picard.  He confronts the admiral saying:  “Admiral! What you’re doing here is unethical; it’s immoral. I’ll fight it.” And the Admiral replies “Do what you must, Captain. And so will I.”

This brings about the final confrontation where Admiral Satie calls a Senior Admiral from Starfleet to watch her interrogate Picard who she has labeled a traitor. The investigation ends with her interrogating him and in the process revealing that she has become so consumed with “defending liberty” that she is willing to trample the rights of anyone that she suspects of disloyalty to the Federation.  The questioning of Picard by the Admiral is fascinating and thought provoking because there are people that think and act just like the Admiral, believing like her that they are defending the United States or in her case the Federation.

Admiral Satie: Tell me, Captain, have you completely recovered from your experience with the Borg?

Admiral Satie: It must have been awful for you… actually becoming one of them. Being forced to use your vast knowledge of Starfleet operations to aid the Borg. Just how many of our ships were lost? Thirty-nine? And a loss of life, I believe, measured at nearly 11,000. One wonders how you can sleep at night, having caused so much destruction. I question your actions, Captain; I question your choices, I question your loyalty!

Capt. Picard: You know there are some words I’ve known since I was a schoolboy: “With the first link, the chain is forged. The first speech censured, the first thought forbidden, the first freedom denied, chains us all irrevocably.” Those words were uttered by Judge Aaron Satie, as wisdom and warning. The first time any man’s freedom is trodden on, we’re all damaged. I fear that today…

Admiral Satie: [stands up in anger and interrupts Picard] How dare you! You who consort with Romulans, invoke my father’s name to support your traitorous arguments! It is an offense to everything I hold dear! And to hear those words used to subvert the United Federation of Planets. My father was a great man! His name stands for integrity and principle. You dirty his name when you speak it! He loved the Federation. But you, Captain, corrupt it. You undermine our very way of life. I will expose you for what you are. I’ve brought down bigger men than you, Picard! [Admiral Henry gets up and leaves the room]

Admiral Henry ends the investigation then and there and sends Admiral Satie home.  Of course this is fiction but the mindset and attitude of Admiral Satie seems to have been embraced by some in our government and security agencies, including the TSA and the NSA. But the talk is out there, former Senator and Secretary of Defense William J. Cohen said: “Terrorism is escalating to the point that Americans soon may have to choose between civil liberties and more intrusive means of protection.” Well the choice has been made and I don’t think that there is any going back despite the posturing of politicians on both sides of the political divide. The fact is that polls show that the majority of Americans are willing to sacrifice freedoms for security.

Frederick Douglass once said: “Find out just what the people will submit to and you have found out the exact amount of injustice and wrong which will be imposed upon them; and these will continue until they are resisted with either words or blows, or with both. The limits of tyrants are prescribed by the endurance of those whom they oppress.”

I contend that we must fight this war but in the process not lose who we are as a people and surrender the ideals, principles and freedoms that made us the envy of people everywhere.  While Edward Snowden may have acted illegally and for all we know may now be attempting to work some kind of deal with the Communist Chinese to keep himself out of the United States justice system. Since what he revealed to Glenn Greenwald actually is a matter that needs serious debate by Congress, the administration and the body politic I think it would be better for him and the country if he came back and stood trial rather than hiding out in a country that repeatedly attacks us with cyber warfare. I think that Snowden damages his credibility by fleeing and in the process will derail the debate that is needed on how we balance legitimate security concerns without destroying our political system and hard won freedoms in the process.

The balance has to be found in this effort; right now the pendulum is so far to the security side that it seems freedom is no longer even a concern at least for the vast majority of the population and our political leadership. The current situation has raised the issue but unless we undertake a real debate in the issue it is very likely that it will fade away and the national security state that we have become will grow even stronger with the inevitable loss of even more civil liberties.

One only has to look at what politicians on both sides of the political chasm have said about “protecting the homeland” to realize that this is only the beginning and that if we do not have a spirited public debate that we risk our Constitutional liberties under the 4th Amendment as well as potentially the 1st Amendment.

The latter is a real possibility not in the matter of Snowden, but Greenwald and other reporters who did their job reporting the story. Republican Representative Peter King has urged that charges be brought against the reporters. Prosecuting Snowden is one thing, should we be able to get him back because he did break the law, even if one agrees with his reasoning for doing so. However prosecuting reporters for doing their job is something that would be chilling. I cannot see that happening, but the fact that a prominent legislator on important committees dealing with national security would suggest it shows how close we are to surrendering even more freedom in the name of security.

The last lines of “The Drumhead” are interesting. Lieutenant Worf comes to Picard to let him know that Admiral Satie and Admiral Henry have left the Enterprise. Worf is apologetic about his rather overzealous role in the investigation and realizing the danger says: “after yesterday, people will not be so ready to trust her.” To which Picard replies “Maybe. But she, or someone like her, will always be with us, waiting for the right climate in which to flourish, spreading fear in the name of righteousness. Vigilance, Mister Worf – that is the price we have to continually pay.”

Eternal vigilance in the face of both terrors from abroad and self imposed tyranny designed to protect us from the terrorists. Yes James Madison, God bless him was absolutely right when he said “The means of defense against foreign danger historically have become the instruments of tyranny at home.” However I fear that those that warn of such dangers will themselves be labeled the enemy.