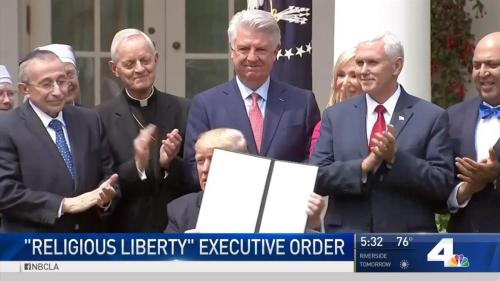 Just a brief thought to start out the week. Since the beginning of the Trump Campaign his most vocal supporters other that the Alt-Right crowd and people like Roger Stone have been Christian pastors. This really bothered me all weekend so I need to get it off my chest early so I can go on to better things.

To me this has been one of the most perplexing things of the past two years. I wonder how men and women who castigated Democrats, and even some moderate Republicans with epithets often too vile to print ended up supporting a man who exhibits no trace at all of a genuine Christian faith. How they not only support but defend a man whose life if nothing else epitomizes everything that Jesus preached against, even threatening the wrath of God on Trump’s opponents.

I am not alone. Conservative columnist Erick Erickson, who is a Christian by the way noted in a column last week:

“Watergate may have turned Charles Colson from hatchet man to pastor, but defense of President Trump is turning a lot of pastors into hatchet men. Few people come away from Trump’s orbit without compromising their characters.”

Admittedly some of Trump’s big time clerical supports had little in the way of character to begin with, fleecing their flocks and often being caught doing so by law enforcement, some like Jim Bakker even going to jail. However, it is scary that quite a few who even if you disagreed with their politics, theology, or social views, still showed a modicum of Christian character have thrown it away to defend the indefensible. These hatchet men are truly dangerous because they poison the souls of their flocks and in the process demean the entirety of the Gospel message of reconciliation and peace.

But this is nothing new. Ever since Constantine various clerics and preachers have cozied up to rulers in order to gain temporal power for their part of the church. These American preachers today do not believe in the equality of human beings, they delight in condemning people, and frequently use the legislative process to impinge upon or limit the rights of others. Although they said they loved the Constitution when Barak Obama was in office their actions show that they despise it as well as the Preamble of the Declaration of Independence. Their attitudes towards the heart of American democracy are much like the Southern planters and slaveowners. One of them, George Fitzhugh of Virginia wrote in 1850:

“We must combat the doctrines of natural liberty and human equality, and the social contract as taught by Locke and the American sages of 1776. Under the spell of Locke and the Enlightenment, Jefferson and other misguided patriots ruined the splendid political edifice they erected by espousing dangerous abstractions – the crazy notions of liberty and equality that they wrote into the Declaration of Independence and the Virginia Bill of Rights. No wonder the abolitionists loved to quote the Declaration of Independence! Its precepts are wholly at war with slavery and equally at war with all government, all subordination, all order. It is full if mendacity and error. Consider its verbose, newborn, false and unmeaning preamble…. There is, finally, no such thing as inalienable rights. Life and liberty are not inalienable…. Jefferson in sum, was the architect of ruin, the inaugurator of anarchy. As his Declaration of Independence Stands, it deserves the appropriate epithets which Major Lee somewhere applies to the thought of Mr. Jefferson, it is “exuberantly false, and absurdly fallacious.”

Southern preachers condemned opponents of slavery in the abolition movement, including fellow evangelicals as “atheists, infidels, communists, free-lovers, Bible-haters, and anti-Christian levelers.”  Like the Southern preachers of the ante-bellum era the political pastors of today stand against the weak, the outcast, the poor, and the alien. Instead of standing for the weak, these preachers lead their congregations to despise them as they accommodate themselves to the service of the powerful represented by President Trump. Dietrich Bonhoeffer summed it up well when wrote about the “German Christians” who followed Hitler:

The sad thing is that the so-called Christianity of our day is not far removed from that of the ante-bellum South or that of Nazi Germany. It worships power and riches and the only rights that it desires to protect are its own. Led by the hatchet men in the pulpits this church have soiled themselves with a stain that they will never shed, and they will stand condemned even more than the man that they support, because unlike him, they know better, or at least they should.

Conservative scion Barry Goldwater warned us about them in 1994:

“Mark my word, if and when these preachers get control of the [Republican] party, and they’re sure trying to do so, it’s going to be a terrible damn problem. Frankly, these people frighten me. Politics and governing demand compromise. But these Christians believe they are acting in the name of God, so they can’t and won’t compromise. I know, I’ve tried to deal with them.”

But Goldwater also knew that the leaders of the Christian Right who now are solidly behind Trump were easily manipulated by the hard right. In 1981 he told an interviewer:

“I don’t want to see religious bigotry in any form. It would disturb me if there was a wedding between the religious fundamentalists and the political right. The hard right has no interest in religion except to manipulate it.”

Donald Trump is manipulating the hell out of them, speaking to their deepest fears and promising them that they will be the ones that come out on top in his America. He has cultivated that by signing executive orders designed to cater to their every desire in exchange for their fealty which they readily give him. He is a nearly cult like messiah figure to many of them and their preachers bask in the favor he shows them without thinking twice about the true cost both to their faith, and the freedom of all people in the United States.

Charles Morgan Jr., a lawyer in Birmingham Alabama wrote after the bombing of the 16th Street Baptist Church by Ku Klux Klansmen who claimed to be Christians and by the Christian preachers who over the course of decades had given them sanction:

He was right, as was Bonhoeffer.  So anyway, that’s a hell of a way to start the week.