The Dangers of Political Violence: The Lesson of the Reichstag Fire 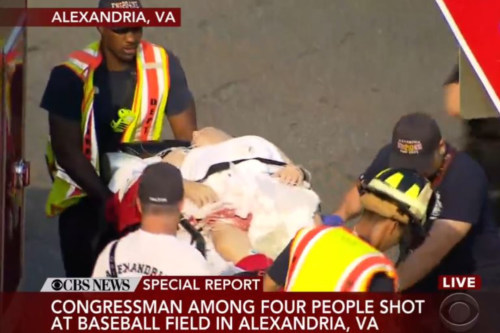 Yesterday a man named James T. Hodgkinson opened fire on members of the Congressional Republican baseball team as they practiced for their annual game against the Congressional Democrats which is a charitable event that helps a number of local agencies that help children. House Majority Whip Steve Scalise was critically wounded and several police officers were wounded during the exchange of fire in which Hodgkinson was killed. I was shocked and infuriated by his actions. Political violence and the attempted assassination of any elected official in a democracy where we still have the ability to remove people or parties from office at the ballot box is never justified. I would call his act an act of terrorism just as I have other acts by so many others.

But unlike other times when a white shooter killed or wounded multiple people based on their race, religion, or politics I was joined by many GOP leaders. Sadly, some like Newt Gingrich, Repreantive Steve King and a host of Right Wing pundits blamed it on “typical left wing violence” while ignoring the constant attacks and threats from Right Wing extremists including members of the militia movement, the KKK, and various new-Nazi and Alt Right groups and individuals.

At least President Trump, for the first time in his presidency urged unity and extolled the best part of Americans working together. I was pleased to here his words which I think were genuine, and I hope that this will be a moment that defines his presidency in a positive way for all Americans. That being said I have reasons to doubt, not that I want to but because of his past actions which I will mention later in the article.

From was we know Hodgkinson was very active politically and quite angry at the GOP and President Trump but until today no one, even friends who knew him well would have expected him to cross the line to commit political violence. The congressman from his district from Illinois said that Hodgkinson was angry in his communications about issues but never crossed a line for the office to think that he was potentially dangerous. However, he had a history of domestic violence, destruction of property and a number of other issues. One of Hodgkinson’s Facebook posts from 2015 was a editorial cartoon criticizing Scalise. Hodkinson had been in the D.C. area a couple of weeks and had been spending time at the YMCA near the ball field where the shooting occurred. The former Mayor of Alexandria saw him a number of times and reported that he appeared to be living out of a gym bag and had offered to help Hodgkinson get a job.

I’m sure that there will be more information about Hodgkinson coming out so I will not go into any more detail or speculate why he committed this act, but I will discuss the very real dangers to civil liberty and legitimate peaceful political dissent that his act could lead.

Despite my initial optimism about how the President Trump responded today and many of his advisors have shown spoken in very authoritarian language about political dissent, demonizing their opponents, first during their GOP opponents in the primaries, then all who opposed them during the general election and afterwards. The president even blessed violent acts committed by his supporters during the campaign. Any time a protester physically responded to bullying or intimidation at Trump rallies they were set upon and then were blamed for the resulting violence even if they were the victims.

But what I am afraid is that acts such as Hodgkinson’s will result in draconian measures to limit dissent. People forget that it was the action of a single Dutch Communist acting on his own to burn down the Reichstag that gave Hitler the ability to pass the Enabling Act in March of 1933. That act gave his government unprecedented authority to arrest and detail opponents without due process rights, as well as to shut down opposition newspapers. It was followed up by other laws during the course of the Third Reich which further restricted political opposition. Often people arrested in the round ups would be acquitted of any crime but then upon release would be taken by the SA or SS to concentration camps.

Another incident was the assassination of a junior German diplomat at the German embassy in Paris in November 1938. When he died Hitler gave Josef Goebbels permission to launch a pogrom against the Jews now known as Kristallnacht. Hundreds of synagogues were burned, thousands of Jewish businesses looted, and hundreds of Jews killed, with thousands rounded up and sent to concentration camps.

The problem is that individual acts of violence against leaders who are predisposed to authoritarian responses give those leaders license to suspend laws and civil liberties on what are called exceptional circumstances. The attack by Hodgkinson could easily be construed as an act of political terrorism. As Timothy Snyder noted in his book On Tyranny:

“Modern tyranny is terror management. When the terrorist attack comes, remember that authoritarians exploit such events in order to consolidate power. The sudden disaster that requires the end of checks and balances, the dissolution of opposition parties, the suspension of freedom of expression, the right to a fair trial, and so on, is the oldest trick in the Hitlerian book. Do not fall for it.”

That is a warning to all who think that individual acts of political violence can be excused or tolerated, they end up threatening the liberties of all. While I do not think this particular attack is a Reichstag Fire moment, the next one might be and anyone who thinks that their act of violence will help the country is sadly mistaken. For that matter it is also possible that a group or individual sympathetic to Trump could create a false flag incident in order to prompt him to suppress legitimate dissent.

Like I said we will find out more as the days go by about the shooter, the attack, and the possible executive or legislative responses to it, not to mention possible violence against protestors or politicians committed by armed Trump supporters who have often threatened to respond violently to any attack against Trump or the GOP.

This is a very dangerous moment. I do pray that Representative Scalise will recover from his wounds and hope that I will not see progressives rejoice regarding the crime committed by Hodgkinson. Likewise as I mentioned earlier in the article I am heartened by President Trump’s response yesterday and I pray that it will be something that defines the rest of his presidency. I may oppose many, if not most of his policies and actions, as well as hoping that the investigation of his advisers interactions with the Russians goes forward; but I will never continue to hope and pray for the best for our country and yes even for him. That being said I am very wary based on his past words and actions and will never give up my right as an American to speak openly and honestly. I learned that lesson from many great American military men including General Smedley Butler and Colonel David Hackworth. Dissent is still an act of patriotism no matter what some people claim.