Repair Our Losses and Be a Blessing to Us: A Night at the Congressional Baseball Game

Friends of Padre Steve’s World,
Baseball legend Bill Veeck once noted:  “Baseball?  It’s just a game – as simple as a ball and a bat.  Yet, as complex as the American spirit it symbolizes.  It’s a sport, business – and sometimes even religion.”

Baseball is essential to the American spirit, it is complex and for people like me it is a religion, a true Church in which I find refuge. Likewise, as I get older and more disillusioned with the Christian Church and religion in general I tend to agree more and more with Annie Savoy in Bull Durham when she says   “The Only church that truly feeds the soul, day-in day-out, is the Church of Baseball” 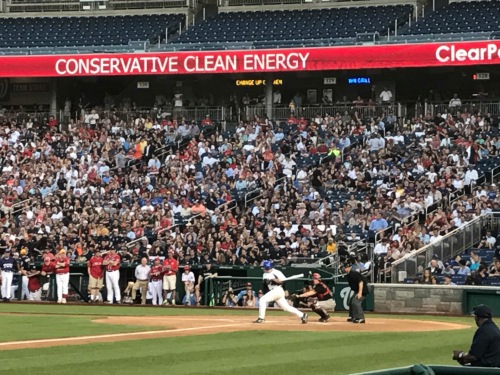 I, like many people turn to baseball in times of trouble. My frequent trips to the ball park after Iraq were places of solace where I could escape the terror of my PTSD.

Last night I went up with Chaplain Vince Miller to see the Congressional Baseball game at National’s Stadium in D.C. It was  a last minute decision. My friend messaged me Wednesday evening and suggested it. He got the tickets, we got permission from our bosses, rearranged our schedules and I got the hotel and drove up. When he contacted me Wednesday he felt that it was something that we needed to do, and I immediately agreed. There were two reasons for this; First some long overdue self care that you can only have from people who are friends who have lived the same kind of life you have, but second because both of us thought it was important in a deeper way.

I believe that we can vehemently disagree about policy, but the answers are found at the ballot box and by deciding to become friends again. Likewise I believe that one of the best places for that is the baseball diamond where last night members of the Democrat and Republican Senate and House faced each other as friends during a baseball game, the proceeds of which benefited charities in the Washington D.C. Metro area.

Wednesday’s attack was an attack on America itself, our institutions, and based on the violent rhetoric and intense anger of many people it could have happened to either team. So last night’s game was a balm for the soul of the nation and I hope a sign of better things to come. Maybe it took something like this to realize that we have ventured too far down the road of hate and intolerance to continue that direction.

Walt Whitman wrote that baseball is “our game – the American game.  It will take our people out-of-doors, fill them with oxygen, give them a larger physical stoicism.  Tend to relieve us from being a nervous, dyspeptic set.  Repair these losses, and be a blessing to us.” 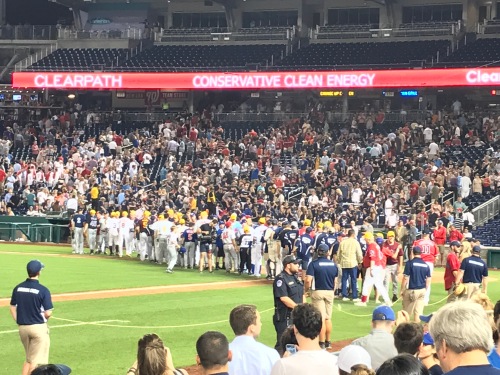 The game was fun to watch both sides played hard but the sportsmanship, camaraderie, and friendship showed. From the crowd there were few boos or catcalls from either side of the nearly 25,000 fans of both teams. Before the game the members of both teams went to second base and took a knee praying for their colleague Representative Steve Scalise and the police officers wounded in the attack. Even President Trump struck the right note in his remarks which were broadcast on the center field scoreboard. Among the fans of both sides there was absolute courtesy that was so unlike the intense and often mean spirited partisanship that has consumed the nation for the past decade or more. I know that I can only hope that this will continue.

The Democrats overwhelmed the GOP with a barrage of hits while their pitcher Representative Cedric Richmond of New Orleans threw a five hitter, and struck out seven. GOP shortstop Ryan Costello of Pennsylvania who had been moved from third base due to the shooting of Scalise  showed excellent defensive prowess making a number of outstanding defensive plays. 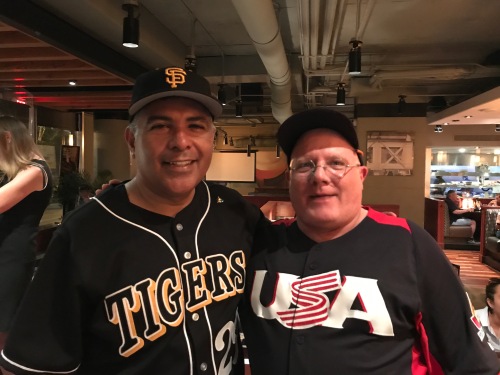 But on another level this trip was good for me and for Vince as well. We had both thought it important to show our support by going and we likewise both knew that we needed the time together to take care of each other, but it became bigger than that. After the game we went for a nightcap at the Gordon Biersch Brewery Restaurant near the stadium. While we were there two members of Congress, Republican Congressman Mark Walker of North Carolina and Democratic Congressman Tony Cardenas of California came in and we both greeted them and thanked them for coming out to play the game after what happened yesterday. Ever gracious both autographed baseballs for us and Cardenas extended an invitation to visit him in his House office.

The fact is that we in the military deal with losing friends to senseless violence everyday, but this is not what normal people deal with, including the men and women who serve in the House and Senate. To go out and play a ballgame after your colleagues were attacked is not an everyday event and there had to be some amount of fear for anyone that went out onto that field, perhaps for the first time in a long time members realized that they too could be the target of political violence. I think that that shook many people to the core, and I believe that it took a measure of courage for them to play the game after the attack, but I digress…

Our time with both of these Congressmen was important, they were surprised and pleased that two Navy Chaplains completely changed their plans and travelled 200 miles to watch them play baseball. It was also interesting because Vince is from North Carolina, and Representative Walker was a pastor for many years, and the family of Congressman Cardenas had been migrant workers around Stockton California, my home town. I’m not going to speculate but I am going to assume by how they treated us that it meant a lot to them that we and so many others stood with them last night. I think they realized as many others did, that this is about all of us, Democrat and Republican, and as I said before I hope and pray that this might signal a new and less hateful era in American politics.

So I’m going to leave you with the mystery of the Spirit that worked in the hearts of two Chaplains who needed some time to take care of each other had our lives intersect those of a lot of nice people,

So anyway, let us try to all do better.