I had a Comrade: Farewell LTC John Penree 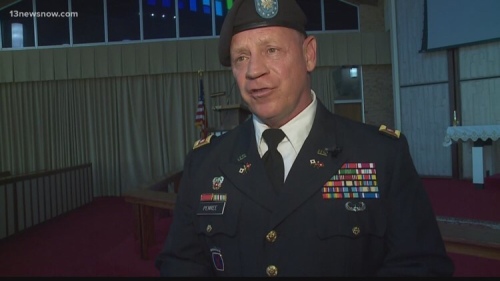 Today marks a solemn occasion at our base. We will be saying our farewell at a memorial service for our Army Deputy Commander, Lieutenant Colonel John Penree. He passed away late last Monday night. He was beloved by many and had served our country in the New York Army National Guard and the United States Army for 42 years.

He will receive full military honors in the ceremony which is a collaboration between the Army and the Navy. His wife Patty and his six children will be in attendance along with a number of high ranking officers and other dignitaries. I only knew and worked with him for a year but came to love him and consider him a friend. We had worked together the Saturday before he died at a ceremony marking opening day for the Little League the meets on our base. Not long before that we had enjoyed a day working and playing with the German contingent from NATO and their families. He was a good man and a good comrade in arms. In the words of the old German military funeral march Ich hatt’ ein Kameraden “Ich hatt’ ein Kameraden, Einen bessern findest du nit…” I had a comrade, you will find none better.

Today I will include that thought in my meditation at the service and will,close the service with the words of Lieutenant Colonel John McRea, a Canadian Soldier, physician, and poet in the First World War. His poem, In Flanders Fields is a classic and it speaks to soldiers as few poems can:

In Flanders fields the poppies blow

Between the crosses, row on row,

That mark our place; and in the sky

Scarce heard amid the guns below.

We are the Dead.   Short days ago

Loved and were loved, and now we lie

Take up our quarrel with the foe:

To you from failing hands we throw

The torch; be yours to hold it high.

If ye break faith with us who die

We shall not sleep, though poppies grow

I will leave you with that and ask you to pray for John, his family, and those that he leaves behind.

One response to “I had a Comrade: Farewell LTC John Penree”