They Silently Gather ‘Round Me: Memorial Day 2018 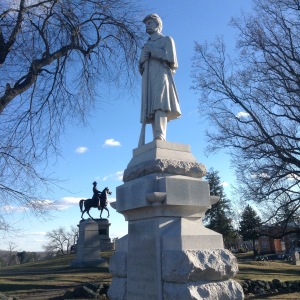 After the end of the American Civil War, the poet Walt Whitman reflected on the human cost of it. Whitman wrote,

“Ashes of soldiers South or North,

As I muse retrospective murmuring a chant in thought, The war resumes, again to my sense your shapes, And again the advance of the armies.

Noiseless as mists and vapors, From their graves in the trenches ascending, From cemeteries all through Virginia and Tennessee, From every point of the compass out of the countless graves,

In wafted clouds, in myriads large, or squads of twos or threes or single ones they come, And silently gather round me…”

Memorial Day is always an emotional time for me, especially since I returned from Iraq in 2008, and this weekend I have been thinking about the men and women that I knew who died in action or died after they left the service, some at their own hand, unable to bear the burdens and trauma that they suffered while at war. I was reminded of them again at the memorial service that we conducted for the sailors and soldiers from our base who have died in action since September 11th 2001. In an age where less than one percent of Americans serve in the military, I think that it is important that we take the time to remember and reflect on the human cost of wars.

I think of the battlefields that I have served on in Al Anbar Province, the one my father served on at An Loc, Vietnam, or the battlefields and the graveyards I have been to, Verdun, Waterloo, Arnhem, Normandy, Belleau Wood, Luxembourg, the Shuri Line, the Naktong River, Yorktown, Chancellorsville, Antietam, Stone’s River, Bentonville, Gettysburg, the wrecks of the USS Arizona and USS Utah at Pearl Harbor, and so many more, I think about the men and women who never returned. To me all of these places are hallowed ground, ground that none of us can hallow, the sacrifices of the men who gave their last full measure of devotion have done that better than we can ever do.

There are some songs that are haunting yet comfort me when I reflect on the terrible costs of war, even those wars that were truly just; and yes there are such wars, even if politicians and ideologues demanding revenge or vengeance manage to mangle the peace following them. Of course there are wars that are not just in any manner of speaking and in which the costs far outweigh any moral, legal, or ethical considerations, but I digress…

Joshua Lawrence Chamberlain, the hero of the Battle of Little Round Top at Gettysburg wrote something that talks about the importance and even the transcendence of the deeds of those who lost their lives in those wars fought and died to achieve.

“In great deeds, something abides. On great fields, something stays. Forms change and pass; bodies disappear; but spirits linger, to consecrate ground for the vision-place of souls… generations that know us not and that we know not of, heart-drawn to see where and by whom great things were suffered and done for them, shall come to this deathless field, to ponder and dream; and lo! the shadow of a mighty presence shall wrap them in its bosom, and the power of the vision pass into their souls.”

Elton John wrote and performed this song, Oceans Away on the centenary of the First World War. It speaks of the men that never came home, and he related it to those who continue to go off to war today.

I hung out with the old folks

In the hope that I’d get wise

I was trying to bridge the gap

Between the great divide

Hung on every recollection

In the theater of their eyes

Picking up on this and that

In the few that still survive

The ones who hold onto the ones, they had to leave behind

The ones that had to stay,

Beneath a little wooden cross

Just to touch the faded lightning

Of their powerful design

Of a generation gathering

For maybe the last time

Where the green grass sways

And the cool wind blows

Across the shadow of their graves.

Shoulder to shoulder back in the day

Sleeping bones to rest in earth, oceans away

The ones who hold onto the ones, they had to leave behind

The ones that had to stay,

Beneath a little wooden cross

Likewise I find myself thinking about all those times alone overseas, and realize that many did not come home. The song I’m Dreaming of Home or Hymne des Fraternisés from the film Joyeux Noel which was adapted by French composer Philippe Rombi from the poem by Lori Barth I think speaks for all of us that served so far away, both those who returned and those who still remain oceans away.

I hear the mountain birds

The sound of rivers singing

It flows through me now

So clear and so loud

I stand where I am

And forever I’m dreaming of home

I feel so alone, I’m dreaming of home

It’s carried in the air

The breeze of early morning

I see the land so fair

I stand where I am

And forever I’m dreaming of home

I feel so alone, I’m dreaming of home

This is no foreign sky

I see no foreign light

But far away am I

From some peaceful land

A hand in my hand

I feel so alone, I’m dreaming of home.

Please take the time to remember those who whose spirits still dream of home, oceans away.