The Witness of History: What is the Worth of Human Life? 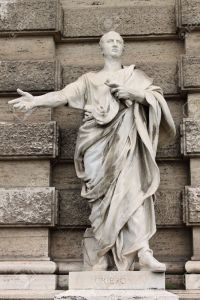 The great Roman philosopher and political theorist Marcus Tullius Cicero wrote, “History is the witness that testifies to the passing of time; it illumines reality, vitalizes memory, provides guidance in daily life and brings us tidings of antiquities.”

Those who follow my writings here on this site know that I am a historian and that much of what I write, even regarding current events, is framed by history and the stories of those who came before us. That is one of my driving passions, a passion for historical truth, and a passion to ensure that the past is not forgotten.

Cicero is an important figure in history. He resisted the moves toward the dictatorship of the Caesars and would die for his belief in the Republic. As such he inspired the founders of the United States, including Thomas Jefferson and John Adams. Adams wrote of the Roman:

“As all the ages of the world have not produced a greater statesman and philosopher united than Cicero, his authority should have great weight.”

Sadly, it seems that our society, and even our education system is disconnecting itself from history. We have pretty much stopped teaching history in schools, and often what is taught is myth. As such we have become a society that through its ignorance of the past is ever repeating the worst aspects of our history. As a whole we are ignorant of our past, and that ignorance is demonstrated by many of our political, business, journalism, educational, and military leaders on a daily basis.

Cicero wrote “To be ignorant of what occurred before you were born is to remain always a child. For what is the worth of human life, unless it is woven into the life of our ancestors by the records of history?”

Our lives must be woven together with those who came before us, without that sacred connection to the past, we endanger the future, and doom those who follow us. Cicero wrote, “The life of the dead is placed in the memory of the living.” Thus, it is for us the living to remember and never forget those who have gone before. That is why I write.

I will write more on things that Cicero wrote and said, including political and social lessons that are as relevant today as when he wrote them.