The First Rule: Above All Thou Shall Not Be a Bystander 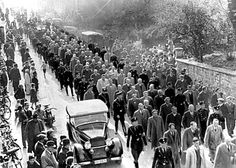 Jewish Men being Rounded Up in Baden with Citizens looking on

Two years ado we have watched as a rabid Trump supported sent pipe bombs to a dozen men and women who the President has personally attacked in speeches, interviews, or on his Twitter account. We have watched as a White man gun down two Black senior citizens in a Louisville, Kentucky Kroger store after failing to gain access into a Black Baptist Church. Last year have watched as a hate filled anti-Semite kill eleven Jews, mostly senior citizens in the Tree of Life Synagogue in Pittsburgh. Likewise we watch as the President turns a caravan of Honduran refugees, mostly women and children, nearly 1,000 miles from the US border into a terrorist caravan full of MS-13 and ISIS killers, something that he reprises at nearly every rally that he headlines.

The President has blamed the intended victims for the actions of a very real terrorist who happened to be one of his most stalwart supporters. He ignored the racially motivated murder of Black senior citizens. He made jokes about having a “bad hair day” within hours of the massacre at Tree of Life on his way to a political rally where he again excoriated the press and his political opponents blaming them for the violent acts of his supporters or men who have fully bought in to the President’s racial conspiracy theories.

Many people wonder how this can happen, but it happens all too easily. All that is needed is a population that has been conditioned by propaganda, based on historical myth, untruth, a prevailing climate of fear, and in which the threat of crisis, real or imagined, can delude even good, able, and even extraordinary people to commit crimes that if they were not real, would be incomprehensible to the mind.

In such times decisions have to be made, difficult decisions, the decision to stand for what is right, even if the country’s leaders, and their most vocal followers threaten violence and the use of government force against those who dissent.

Primo Levi, an Italian Jew who survived Auschwitz wrote, “Monsters exist, but they are too few in number to be truly dangerous. More dangerous are the common men, the functionaries ready to believe and to act without asking questions.”

The excuse of just following orders has been shown to be no excuse. Men and women who follow such orders under a thin veneer of technical legality will be condemned by history. The men of the Wehrmacht who gave logistic, communication, and security support to the Einsatzgruppen that were committing genocide in the Soviet Union were as guilty as the trigger pullers.

Genocide begins when those who know better turn their backs on crimes committed against a few. The last lines of the classic film Judgement at Nuremberg are illuminating when it comes to understanding men and women who do just that. In the film, Burt Lancaster playin the convicted Nazi judge Janning asks Judge Heywood played by Spencer Tracy to visit him. In that closing scene Janning implored Heywood to understand that he never believed that things would go so far.

Judge Dan Haywood: “Herr Janning, it “came to that” the first time you sentenced a man to death you knew to be innocent.”

Being a perpetrator is one thing, but being a bystander is worse. As Hannah Arendt noted: “The sad truth is that most evil is done by people who never make up their minds to be good or evil.”