It is a sad day to be an American, especially one who serves in the military. I saw another officer comment on his Twitter feed that for the first time in his career that he did not feel pride in putting on his uniform. A Turkish friend I know here  was angry at his home country, and he served in the Turkish Army in his younger days. As I watch the brutal attacks on the Kurds of northern Syria by the Turkish military I have to angry with them. President Trump has abandoned our most stalwart and effective ally in the region and the fight against the Islamic State to the democratically elected dictator of Turkey, Recip Erdogan.

The President claimed to be doing this as fulfilling a campaign promise to withdraw American troops from Syria, but he didn’t do that. He simply moved them aside to allow the Turks to attack the Kurds, but the troops are still in Syria. Additionally, reports indicate that U.S. intelligence sources provided the Turks aerial and satellite imagery to help them target Kurdish positions. Kurdish fighters are resisting, but against the massive armored, and mechanized invasion, backed by strong air support their defeat is a foregone conclusion unless the United States changes its policy and decides that the Kurds are worth helping. 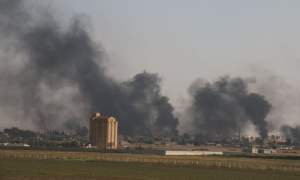 The leaders of the United States military have requested that the Turks end their invasion and withdraw, but that will not happen. President Trump has given the game away. Turkish President Erdogan has threatened the European Union with dumping three and a half million Syrian refugees on them if they so much as dare to criticize him. Of course his motive is blackmail, and should he dump the refugees his goal will be  to destabilize the E.U. and help Right Wing Racist parties into power, with the ultimate goal of destroying the E.U. Sadly, President Trump encourages this by treating the E.U. and our NATO allies as poor allies and enemies, at times threatening them and also punishing them with frankly insane tariffs that that only serve to tear apart the most successful military, political, and economic alliance in history. In doing so he encourages our real enemies and drives off real friends.

These actions will have drastic repercussions. America’s word will not be trusted.  Friends will seek alternative security, political, and economic options, and those who desire the downfall of the United States, the E.U., and our military-political alliances will rejoice.

Trump cozies up to age old enemies, excuses their crimes, while abandoning the pillars of the alliances that have helped make us the strongest and previously the most respected country in the world.

All I can say now is that it is very hard to be proud of my country and support the actions of this President. I have served under six Presidents, 4 Republicans and 2 Democrats. Until Trump I found some redeeming qualities, even if I disagreed with their policies and actions.

In under six months I will be retired from the military with a total of 38 years and seven months service on active duty in the Army and Navy, as well as time spent in the Army National Guard and Army Reserve. I have no breaks in service. I have been to war, and I suffer both physically, psychologically, and spiritually from that service.  Now, with the actions of Trump around the world and in our country, it is hard to be proud of my service.

To paraphrase the comments of General Henning von Tresckow, an opponent of Hitler who died for his beliefs:

“We have to show the world that not all of us are like him. Otherwise, this will always be Trump’s America.”