A Day of Fate: November 9th “Der Schicksaltag” in Germany

There are some days in history that are crammed full world changing events, and sometimes those events occur, for good or bad and sometimes good and bad in different countries. In the United States July 4th is not only Independence Day, but eighty-seven years later marked the surrender of Vicksburg and the retreat of Robert E. Lee’s army from Gettysburg. Likewise it was the day that the Louisiana Purchase was announced in 1803 and that in 1826 the Thomas Jefferson and John Adams died.

Since 1918 November 9th has been a day in German history that has impacted both Germany and the world in many ways. In a sense it is almost hard to believe that so much occurred on that day. It is known by many in Germany as Der Schicksalstag (the fateful day). 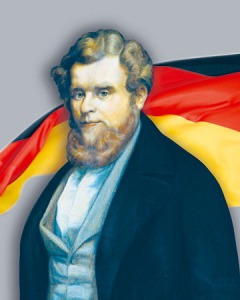 In 1848 a member of the Frankfurt Parliament, Robert Blum was arrested and executed executed for traveling to Vienna to support the 1848 democracy uprising there. A liberal, humanist and democrat Blum advocated German unification without Prussian dominance, protested Prussian oppression of Poles, stood against anti-Semitism and for the rights of Catholics in heavily Protestant German kingdoms. Blum’s dream remained unfulfilled for over a century after his death. Many of the men and women who took part in the failed revolution of 1848 would come to the United States where during the American Civil War they would fight for the emancipation of slaves and later the Civil rights of freed blacks. Among them was Carl Schurz.

November 9th, 1918 was gloomy day at the military headquarters of Kaiser Wilhelm II. General Wilhelm Groener, Quartermaster General of the Army looked his sovereign in the eye and told Kaiser Wilhelm that the war was lost, and that he no longer had the support of the Army. The Kaiser, reeling from battlefield defeats and the mutiny of his precious High Seas Fleet, was stunned. Field Marshal Paul von Hindenburg, who had for all practical intents had headed a military dictatorship with General Erich Ludendorff since 1916, meekly nodded his concurrence with Groener. The Kaiser abdicated the throne and departed in his private train to the Netherlands the next day.

Meanwhile in Berlin, Majority Socialist parliament member Philip Scheidemann proclaimed the Republic to prevent a Soviet takeover. Unfortunately, Scheidemann’s bold move upset a plan for a smooth transition of power between Friedrich Ebert and the outgoing Chancellor Theobald von Bethmann-Hollweg. Chaos ensued and the Republic, known as the Weimar Republic struggled for its existence in the face of a Soviet Revolution and Conservative reaction.

However, the promise of democracy was soured by events that the leaders of the Republic were blamed: a continued allied blockade, a humiliating peace treaty, the loss of territory, the occupation of the industrial areas of the Ruhr and Saar by France and Belgium, heavy war reparations, and the war guilt clause of the Treaty of Versailles. This was compounded by civil war between various right and left wing factions and major economic problems including massive hyper-inflation of 1920-21 and the Great Depression doomed the young Republic. 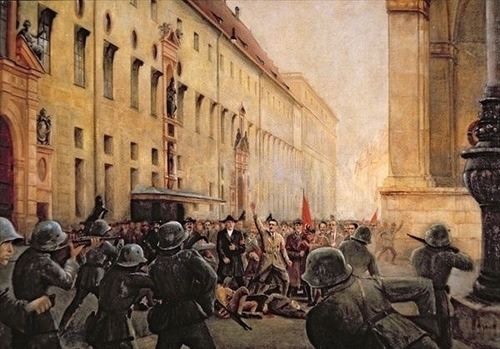 Five years to the day following Scheidemann’s proclamation a charismatic Austrian in Munich who had fought and been wounded fighting for Germany in the First World War gathered with his political sympathizes and para-military street thugs to attempt a putsch. The man was Adolf Hitler, the head of the small and radical National Socialist Deutches Arbeiter Partei, or National Socialist German Workers Party. Hitler hoped that his putsch would result in a popular uprising against the German government in Berlin. The putsch was a failure and ended in bloodshed at the Feldherrnhalle monument on Munich’s Odeonsplatz.

Hitler fled the scene but arrested and put on trial. The case was tried in Munich rather than Berlin and convicted of treason. He was given a light sentence and jailed for nine months at the Landesberg prison where he wrote his book Mein Kampf. In prison he continued to recruit others to his cause. Less than ten years later Hitler was appointed Chancellor by President Hindenburg. Hitler quickly banned political opposition and began his persecution of Jews and others that he believed to be sub-human and upon Hindenburg’s death in 1934 merged the office of Chancellor and President become the leader of Nazi Germany.

In November 1938 Hitler and his henchmen were looking for a reason to openly begin persecuting the Jews. They had been doing so since the seizure of power, but 1938 marked a turning point. Instead of unofficial pogroms launched by his undisciplined Stormtroopers, this was orchestrated by the top men in the Nazi regime.

One of the chief reasons for this was to seize the property and financial resources of German Jews. This coincided with the expulsion of Polish Jews from Germany. A reason for the action was furnished when a young Polish man, Herschel Grynszpan, whose parents were expelled from Germany on November 3rd went to the German embassy in Paris and shot and mortally wounded Ernst von Rath, a young diplomat, who reportedly had some anti-Nazi sentiments. When Von Rath died the the Nazis unleashed their fury.

Joseph Goebbels unleashed the storm troopers and others in civilian clothes on the night of November 9th. They were supposedly spontaneous demonstrations, but the Police and Fire Departments were ordered not to intervene except to save German property. Stormtroopers ransacked Jewish businesses, homes and synagogues causing hundreds of millions of Reichsmarks in damage, destroying over 200 synagogues and 7000 businesses. About 100 Jews were killed during the rampage, which went unchecked by police. Another 2000-3000 subsequently died either by suicide or in concentration camps in which 30,000 Jewish men were incarcerated.

To add to the insult to injury Jews were charged for the damage done to their property and insurance payments that should have gone to them were collected by the state. The night became known as Kristallnacht, the night of broken glass and marked a major turn in the open Nazi persecution of Jews in Germany, which would extend throughout Europe and end in the Final Solution and the systematic murder of nearly six million Jews. World War Two ended with the total defeat of Germany and the Nazi regime.

Following Germany’s defeat in the Second World War, it was occupied by the Allied powers. Germany was split in two, the East under the domination of the Soviet Union which became the German Democratic Republic, and the West which supported by the United States and Britain became the Federal Republic of Germany.

The divided country became the focal point of what became the Cold War, the fortified border became infamous as the Iron Curtain. The Berlin was blockaded by the Soviets in 1948 and the subsequent airlift kept West Berlin Free. However in August 1961 as the Cold War escalated the leaders of East Germany erected a fence which became the Berlin Wall, a wall which was effectively a means to imprison the population. It seemed to be a fixture that would never come down.

The Wall Comes Down

But in the late 1980s the Cold War began to thaw. Mikhail Gorbachev took power in the economically strapped Soviet Union which was bogged down in a costly war in Afghanistan, and a struggle against a Polish democratic movement. Premier Gorbachev sought to relieve the situation with a policy of openness. It backfired, and throughout Eastern Europe, pro-democracy and pro-freedom groups began to protest the status quo.

The once feared Warsaw Pact began to disintegrate. As borders were opened hundreds of thousands of Eastern Europeans including thousands of East Germans went west through Hungary and Czechoslovakia. East Germans began to gather at the Berlin Wall and on November 9th 1989 the tottering East German government decided to open border crossing points with restrictions. On hearing the news hundreds of thousands of people gathered at the six crossings demanding to be let through, and finally, ignoring orders, Stasi Lieutenant Colonel Harald Jäger who commanded the Bornholmer Strasse crossing opened the gates. The Berlin Wall had fallen and 339 days later East Germany was dissolved. On October 3rd 1990, Germany was reunited. 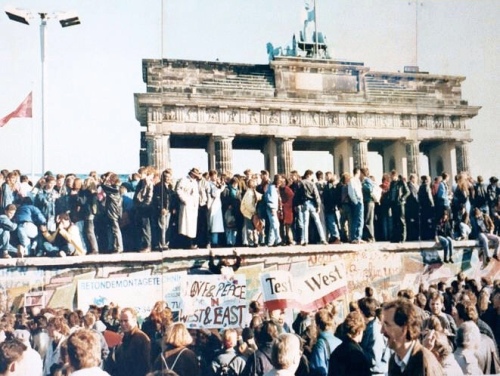 The new Germany is the economic heart of the European Union and has become a champion of human rights and social progress. But that could be in danger with the splintering of the major political parties that guided Germany to its position and the rise of a new nationalistic, racist, and anti-Semitic movement built around the AfD, or Alternative for Germany Party. Some leaders and members of this party express admiration for the Third Reich.

These are all important events, and our challenge as citizens of the world is never to forget just how important and fateful each was, and why November 9th is indeed the “fateful day.” One wonders if a future November 9th will become another Schicksalstag that will again shake Germany to its foundations. The reunited Germany is still struggling with its identity thirty years after the Wall came down. Apart from Berlin, much of the former East seems like a different country than the west. It will be a full generation or more before that identity is settled, especially in the former East.

But then, maybe what is going on in the United States today is much more threatening than anything going on in Germany. We have a President who admires the former KGB dictator of Russia and who constantly tries to undermine Germany, NATO, and the European Union and is suggesting that he attend the Soviet/Russian May Day Parade next year, a parade that mixes a celebration of Soviet Communism and Russian Nationalism, with a profound hatred of the United States, NATO, and the European Union. One has to question the loyalties of the American President this Schicksalstag

It is truly a bizarro world. Harry Truman, Dwight Eisenhower, John F Kennedy and Ronald Reagan, not to mention Barry Goldwater must be spinning in their graves.

3 responses to “A Day of Fate: November 9th “Der Schicksaltag” in Germany”