An Act of War: Trump Has Iranian General Assassinated 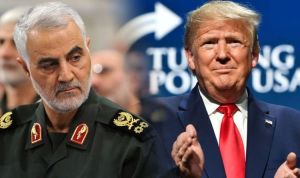 “No one starts a war–or rather, no one in his sense ought to do so–without first being clear in his mind what he intends to achieve by the war and how he intends to conduct it.”

Late Thursday night I saw that the commander of the Iranian Revolutionary Guards Corps “Al Quds” division, General Qasem Soleimani was assassinated by an American Air Force Drone strike, which killed the leader of many of Iraq’s Iranian allied Shia militiamen. This was a day after the Shia militia withdrew after attacking the American Embassy in Baghdad’s Green Zone.

Rather than maintaining a policy of plausible deniability like the Israelis, Russians, Chinese or North Koreans, President Trump had the Defense Department almost immediately claim credit for the strike. Don’t get me wrong, I shed no tears for Qasem Soleimani.

He was responsible for the deaths of hundreds, if not more than a thousand American troops in Iraq, by supplying completed and equipment used to make Improvised Explosive Devices to Shia militants. Thousands of others were wounded, and throughout Iraq, Yemen, Syria, Lebanon, the Gulf States, Saudi Arabia, and even Israel. Militias that he supplied and that are allied with Iran have killed countless Sunni, Kurdish, Sufi, and Christian Arabs. Quite simply, there is no love between the Persians and the Arabs, it is a hatred that preceded the foundation of Islam, or Christianity for that matter. The Persians have always treated the Arabs as inferiors regardless of religion, one reason that some of the most powerful Iraqi Shia leaders remain Iraqi nationalists.

The smart thing to do would have been to use locally manufactured weapons, or those common in the region from Russia, China, North Korea, and European nations, to kill him, and then say nothing. That is how intelligent nations assassinate their opponents, by maintaining plausible deniability. Pardon my less than Christian interpretation of such actions, but beating your chest after such an action as President Trump did today only serves to embolden one’s opponents.

Iran was in the midst of disintegration, protests and deteriorating economic conditions were making it ripe for revolution, but every authoritarian government knows, the easiest way to unify a divided country is war, especially when a longstanding enemy launches a surprise attack that kills a man not only considered a military leader but an national icon. Likewise, the killing of Soleimani will do nothing to change the course of Iran or its policies anywhere. His successor is the man who has been his deputy since the late 1990s. Rather than dividing Iran, this will unify it, against the United States.

One should expect attacks by Iran’s allied militias in Syria, Iraq, Lebanon, the Persian Gulf, and Yemen against American, western, Israeli, and Saudi interests. Likewise one can not calculate the actions of the Russians, Chinese, North Koreans, or others, even friends will be. We could easily find ourselves fighting on multiple fronts without allies or support.

This is uncharted territory. The President did not seek the advice and consent of Congress for  an action that was a functional declaration of war, neither sanctioned by international law, nor in any way covered by the 2001 Authorization for Use of Force sought by the Bush Administration to take action against Al Qaida and Afghanistan; a document used by every succeeding administration for use of force around the world, whether connected with Al Qaida or not. At no point has Congress asserted its authority to declare war. In fact it hasn’t been since President Roosevelt asked for and got a declaration of war against Japan on December 8th 1941, and Germany and its allies when they declared war against the United States a few days later. Since then Congress has yielded to the executive branch and President in every subsequent occasion. Even the War Powers Act, enacted after Vietnam has done little to curtail the actions of each succeeding Presidency. As such this is not just a foreign policy and potential war action, but yet another assault on the Constitution; but then the Constitution hasn’t mattered to most Americans in decades, especially when it comes to military action.

I feel that Americans by and large neither know ourselves, or our enemies, and that this is most exemplified by the example of President Trump. that my friends saddens me.

We believe that our military is the strongest and most capable in the world, which it would be if it had not been gutted by 18 years of war, which despite the vast sums spent on it is now less capable of projecting military power than it was in 2001. Likewise, massive debt of the country impedes the overall economy, the President’s attacks on the nation’s intelligence and free press have harmed our ability to gain information as well as use information to our advantage, and finally the gutting of the State Department has devastated our ability to use diplomacy rather than force to solve problems.

Every instrument of what American diplomats and strategists have called the DIME, the Diplomatic, Information, Military, and Economic pillars of national power are crumbling and neither the President or Congress has the honesty to say so, even though unclassified reports of all of the above are readily available for anyone to see. But many, if not most Americans prefer ignorance of the law, the Constitution, and facts to reality.

Expect cyber attacks, terrorist attacks on Americans overseas and quite possibly attacks in the United States itself. War could easily consume most of the Middle East and world. While the United States military would probably destroy most of Iran’s conventional military, and infrastructure, it will be a great cost. American losses will be more than OIF and OEF combined. The videos of American Warships burning and sinking from saturation attacks by Iran’s vast number of surface to surface anti-ship missiles, swarm attacks by Iran’s missile and torpedo boats, and speedboats laden with explosives piloted by suicide crews will be hard to fathom. Iranian attacks on U.S. bases in Bahrain, the UAE, Qatar, Kuwait, and Saudi Arabia with ballistic and cruise missiles will also overwhelm available missile defenses.

This may sound like a bleak estimate, but I study, I read, and I know.

I don’t know how to end this article but it just seams to me that the President has sown the wind, leaving his military and people to reap the whirlwind. I sincerely hope that I am wrong. But as Admiral Josh Painter, played by the late actor and Senator Fred Thompson said in the Hunt for Red October: “This business will get out of control. It will get out of control and we’ll be lucky to live through it.”

In 1920 T. E. Lawrence wrote of the continuing British intervention and occupation of Iraq: “The people of England have been led in Mesopotamia into a trap from which it will be hard to escape with dignity and honour. They have been tricked into it by a steady withholding of information. The Bagdad communiqués are belated, insincere, incomplete. Things have been far worse than we have been told, our administration more bloody and inefficient than the public knows. It is a disgrace to our imperial record, and may soon be too inflamed for any ordinary cure. We are to-day not far from a disaster.”
I feel much as Lawrence did at this moment in time, and I so want to be wrong.

It is very late and I am tired. Likewise I only think that things will get much worse before they get better.

3 responses to “An Act of War: Trump Has Iranian General Assassinated”