Liberty for the Few, Slavery for the Mass: The Basis of Trump’s America

Just a short thought for today. I am continuing to work on my Mine Eyes Have Seen the Glory! Race, Religion, Ideology, and Politics in the Civil War Era, and Their Importance Today in order to try to get it to my agent and a German reporter for Die Zeit newspaper so she can publish part of it that paper in order to find a German publisher for it.

I have been working hard on the text. I am finishing up my new chapter on Reconstruction, and beginning to rewrite the epilogue and add a chapter on the beginnings of American slavery.

As I did this a quote from George Fitzhugh slaveholder and leading pro-slavery apologist in the 1840s and 1850s jumped out at me because of how similar it is to what I see being advocated by various people and agencies within the Trump administration, as well as the words and legislative actions of GOP lawmakers at the state and Federal level; of course all backed up by the 24/7 right wing propaganda industry. Despite their protestations over the years of supporting the Constitution they actually find it an encumbrance to exerting full executive, legislative, and judicial tyranny. Their views are very close to Fitzhugh who wrote:

“We must combat the doctrines of natural liberty and human equality, and the social contract as taught by Locke and the American sages of 1776. Under the spell of Locke and the Enlightenment, Jefferson and other misguided patriots ruined the splendid political edifice they erected by espousing dangerous abstractions – the crazy notions of liberty and equality that they wrote into the Declaration of Independence and the Virginia Bill of Rights. No wonder the abolitionists loved to quote the Declaration of Independence! Its precepts are wholly at war with slavery and equally at war with all government, all subordination, all order. It is full if mendacity and error. Consider its verbose, newborn, false and unmeaning preamble…. There is, finally, no such thing as inalienable rights. Life and liberty are not inalienable…. Jefferson in sum, was the architect of ruin, the inaugurator of anarchy. As his Declaration of Independence Stands, it deserves the appropriate epithets which Major Lee somewhere applies to the thought of Mr. Jefferson, it is “exuberantly false, and absurdly fallacious.”

My friends, that is the message of President Trump and the Republican Party today. They provide evidence in almost every statement and tweet made by the President and were on full display as he defended the Confederates of Civil War. Equal rights and liberties for all are a existential threat to the champions of oligarchy and thus they must be suppressed even if it means destroying the foundations of liberty, and that begins by destroying our history. That is Trumps agenda. The seed of a KKK man doesn’t fall far from the tree that produced it. However, unlike his father, Donald Trump became President of the United States but acts as if he is the successor to Confederate President Jefferson Davis. His words often sound like that of George Fitzhugh, except that he is not nearly as eloquent in the use of the English language as were the leaders and ideologues of the Confederacy. Compared to them, as evil as they were deluded, by racism and ideology, despite being intellectually gifted and versed in the written and spoken word.  Unlike them, Trump can barely write, tweet, or voice a coherent thought. I think that this is mostly because as a child of wealth and privilege he was and remains intellectually lazy. Sadly, this is probably compounded by some form of dementia today.

Sadly, there are all too many Trump supporters, especially Evangelical Christians who only care about their rights. They will have no hesitancy in ensuring that the rights of others are suppressed even as the oligarchy they support eliminates their rights under the Constitution as well. They are fools, and men like Fitzhugh realized this, as he wrote: “Liberty for the few – slavery in every form, for the mass.”

Such believe and language is not the language of liberty, But tyranny. It is an Orwellian bastardization and twisting of the word and its meaning.

Abraham Lincoln stated the matter well when he said “We all declare for liberty” but “in using the same word we do not all mean the same thing. With some the word liberty may mean for each man to do as he pleases with himself and the product of his labor; while with others the same word may mean for some men to do as they please with other men and the product of other men’s labor.” 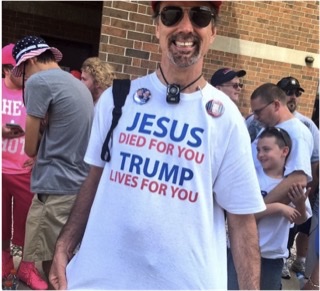 This is not about traditional differences between Republican and Democrat, liberal or conservative. Instead it is about the very foundations of liberty. Without liberty we will slide into authoritarianism, dictatorship and tyranny. With every passing day, President Trump and his Attorney General, Bob Barr work through the justice Department, the courts, and supporters in the Senate to overthrow our republic’s system of checks and balances, the constitutional limitations on the executive branch, and the rights of all Americans, not just those that worship at the Golden Cow of the Trump presidency.

So anyway, have a great day and until tomorrow, Please be safe.