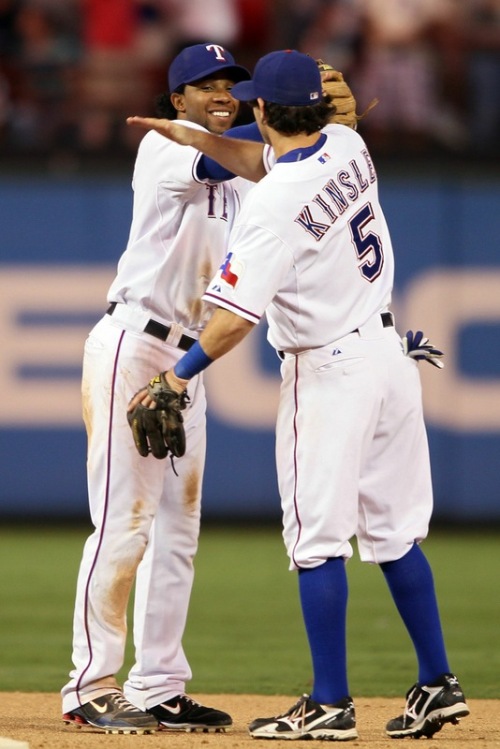 The Texas Rangers did what they should have done on Friday night and defeated the New York Yankees 7-2 at Rangers Field in Arlington Texas.  The win was their first win in a playoff series at home in franchise history.  The win was an impressive win for the Rangers who were coming off a very disheartening loss on Friday night where the bullpen melted down in the 8th inning to had the Yankees a 6-5 win. 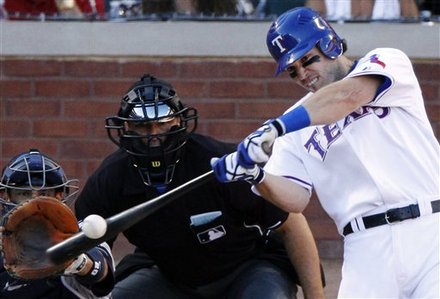 Saturday was different the Rangers got out to an early lead and held on holding the Yankees to just 2 runs while ringing up Phil Hughes for 7 runs on 7 hits in four innings work. Hughes didn’t look at all like he looked when he shut down the Rays in game three of the ALDS.  Elvis Andrus singled to lead off the first inning, advanced to second on a wild pitch, stole third and then stole home for the first run. The aggressive base running seemed to set the Yankees back on their heels just as it did the Rays in the ALDS. In the second inning the Rangers stuck again when David Murphy homered and was followed by Mitch Moreland and Elvis Andrus who both singled. Moreland scored when Michael Young doubled to give the Rangers a 3-0 lead.

The Rangers scored two more runs in the 3rd inning when Nelson Cruz doubled and scored when Murphy doubled. Murphy then scored on a Benji Molina double to make the score 5-0 after three innings. The Yankees got one run back in the top of the 4th inning.  Robinson Cano doubled to lead off the inning and took third on a wild pitch. He then scored on a two out single by Lance Berkman who then was caught going too far off of first and was tagged out to end the inning.

The Rangers continued their assault on Hughes in the bottom of the 5th inning when Nelson Cruz doubled and scored when Ian Kinsler tripled. Kinsler scored when Mitch Moreland singled to give the Rangers a 7-1 lead.  In the top of the 6th Lewis got in some trouble with Robinson Cano hitting a solo home run and then gave up a single to Jorge Posada and a walk to Berkman before he left with two outs being relieved by Clay Rapada who struck out pinch hitter Marcus Thames.  That would be all of the scoring although the Yankees threatened in the 7th 8th and 9th innings as the Rangers’ relievers shut down the potent Yankee lineup with Neftali Felix coming in to close out the Yankees.  Tonight the Rangers relievers did not blow the game and the series now goes into New York knotted at one with Cliff Lee scheduled to start game three in Yankee Stadium and Andy Pettitte.

It should be an interesting go from here on out.