The Deal is Done and are We? There are Always Results 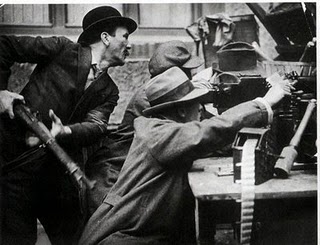 Spartacist revolutionaries and Freikorps in action. Is this our fate? 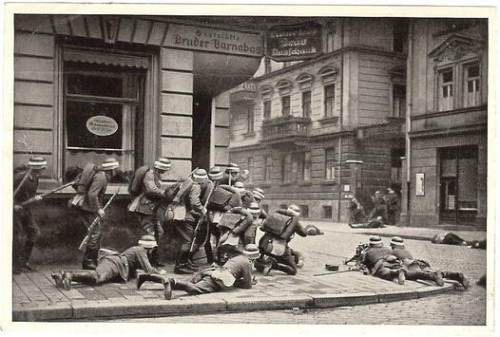 “but this momentous question, like a fire bell in the night, awakened and filled me with terror. I considered it at once as the knell of the Union. it is hushed indeed for the moment. but this is a reprieve only, not a final sentence. a geographical line, coinciding with a marked principle, moral and political, once conceived and held up to the angry passions of men, will never be obliterated; and every new irritation will mark it deeper and deeper.” Thomas Jefferson on the Missouri Compromise

I believe that Thomas Jefferson in describing the results of the Missouri Compromise aptly describes the mood of our times and the consequences of politicians that lead us to the dark abyss of hatred and civil war.   There are times that I wish that I was not a historian or theologian for then I could simply be ignorant of the place that our elected leaders are leading us.

Yesterday and today I sat convalescing at home trying to stay off of my injured leg as the final actions were taken in the House and the Senate on the Debt Ceiling Compromise. I felt as if I was watching a national tragedy being marketed as by some as a triumph of cooperation.  I was amazed that talk which was paired with the opponents of the measure in both parties.  I felt that those praising their actions to pass the increase and related budgetary cuts were saying it all for show even as they sharpened their swords for the next battle even as the vast majority of Americans expressed anger and frustration with the behavior of their elected officials.  A Pew Research poll indicated “72 percent of American characterized the recent budget negotiations as “ridiculous, disgusting, stupid, and frustrating.”

But we have no one to blame but ourselves. We voted them all into office and we have encouraged their repugnant behavior with our votes which more often than not were purchased by the fear mongering engaged by each side and our desire to have our special interests and or ideology come out on top. We have been engaged in what conservative columnist Pat Buchanan declared a “culture war” for the past two decades and wars be they cultural, ideological, and economic or military have consequences.  The longer they go on the worse and more violent they become until one side finally loses and the landscape is destroyed. A conservative German newspaper noted “It is this war-like rhetoric that has so poisoned American politics.” The Germans should know something of this.  The “Kulturkrieg” and the violent hatred of their countrymen in the wake of the defeat of the First World War and humiliation of Versailles brought about civil war.  The pursuit of radical ideologies in the following years is what doomed the ill-fatedWeimarRepublicwhen the economic calamity of the Great Depression struck and led to the tragedy of the Nazi takeover and ultimately led to World War Two.

I believe that the actions of all parties in this forced crisis were a disservice to the citizens of this country, the memory of all who have gone before us and done more to damage our standing in the world than I could ever imagine.  It is as if the leaders of the country have forgotten why they are even in Washington.  There is no unity of purpose, only the language of war being used against fellow Americans.  A German newspaper wrote “No one can forget the Civil War atmosphere in which this debt fight has taken place. It weighs on America’s international reputation. From the point of view of financial markets, the dysfunctional nature of Washington is a risk factor that must be calculated for in the future.”

The sad thing is that there is so much work that has to be done and it is more than reducing Federal Government spending. Our industries have been shipped wholesale overseas using the treaties that business has foisted upon their willing accomplices in both parties in the name of “free trade.”  Our unemployment continues to rise and many economic experts believe that we are entering a “double dip” recession which some believe could easily become a depression. The infrastructure of the nation crumbling with the businesses that benefit from them refusing to contribute to their maintenance unless they receive government contracts and money in return.  We are committed to long term ground wars that have sapped the economy and worn out the military which now seem to serve little strategic purpose.   In fact the position of the Army in Afghanistan could be disastrous if Pakistan decides to stop cooperating and not allow us to supply the Army through it.

It is apparent to me that those that can afford it the least and the military will bear the brunt of the cuts that will come and that it will be a long time before this crisis passes.  No one seems to be addressing the major issue of unemployment or economic growth without which there is no recovery.  I heard the President and Senate Majority Leader McConnell repeat what they have said for years but no plans and no action.  As for the military we are worn to a nub, our equipment needs to be replaced and modernized and our troops still deserve the best that we can give them, but even this is on the chopping block, military retirement is called “an expensive entitlement program” by those advocating that the military adopt a private sector pay and benefit plan of little value especially to those that have spent 10 years at war paying with their minds, bodies and spirit fighting wars that the Wall Street bunch has benefited from, the same Wall Street leaders that now call for reductions in military pay and benefits.  It is obscene.

I would like to believe that this is a rough patch that we will get through, but right now with the terrible acrimony present in Washington and all the State Capitols I have a hard time believing that we will.  The President has failed to enunciate any kind of plan or vision and the Tea Party leadership is acting like the Jacobins in Revolutionary France.

I have no idea who will “win” this “culture war” and does it really matter? The result will be a Pyrrhic victory with the winners celebrating on the ruins of the country.  I only know that we all lose.

4 responses to “The Deal is Done and are We? There are Always Results”