Obama Wins….Now the Real Work of Healing the Wounds Must Begin 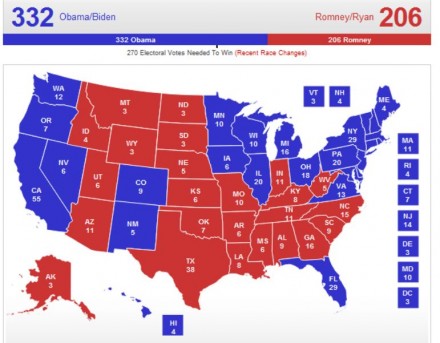 “We are an American family and we rise together or fall as one people.” President Obama victory speech

The 2012 Presidential race is finally over and Barak Obama has been projected to be re-elected to serve as President of the United States. Likewise the Democrats held on and expanded their majority in the Senate, something that not long ago was expected to flip to a Republican majority while the Republicans as expected held on to the House of Representatives, though they lost a few seats.

The fact that the election demonstrates despite the victory of President Obama and gains of the Democrats in both the House and Senate that the country is still deeply divided. In fact I have not seen such division and bitterness in my lifetime. That being said the fact that in key battleground states Republican extremists in Senate races like Todd Akin and Richard Mourdock have been soundly defeated.

The challenges that we face as Americans remain. We have the “Fiscal Cliff” that has to be avoided at all costs, we have a war going on in Afghanistan that no one is paying any attention to that needs to be dealt with even as more wars threaten in the region. There is the Euro crisis, there is the effect of Hurricane Sandy on our own people and those are just the tip of the iceberg.

For the hardliners on both sides of the aisle this may be tough to stomach but the good of the country as a whole comes before the single issues of any of us. There are far too many challenges for us not to pull together.

As for the future the election shows that demographics matter. If they want to remain a credible party the Republicans need to recognize that the population demographics of the country have changed. The moves of Republicans in various state governments to attempt to marginalize Americans that are of different color and economic backgrounds backfired big. Latinos came out in huge numbers for Obama in large measure due to the comments of Romney and others in the GOP and comments by Romney about the 47% hurt his campaign bad.

But even with changing demographics there was the fact that Americans expect their leaders to behave like adults. Actions and comments by some Evangelical Christians and some Tea Party candidates killed Republican chances to win back the Senate and cost them seats in the House.  Some of these candidates said and did such nutty things that they lost Senate and House seats that the Republicans should have maintained.

Donald Trump and his merry band of “Birthers” and conspiracy theorists discredited their own cause by the outlandishness if their charges.

The aversion of regular people on both sides of the aisle to the shear obscene amounts of money being spent by a very few individuals such as the Koch Brothers and Sheldon Adelson through Super-Pacs which made it look like a few people were going to buy the election was also a factor.

Unfortunately some of these same people such as Donald Trump are now calling for “revolution” echoing some crazies who have been advocating the same thing for years. I’m taking about the Timothy McVeigh types that blow up Federal Buildings and kill fellow Americans. I’m sorry it is time for grown ups in both parties to take charge. We live in a dangerous world and there are many things that can threaten us, economic problems in Europe, Iranian and Israeli tensions, other danger zones in the Middle East, the South China Sea, natural disasters, you name it problems are are rife in the world and as Abraham Lincoln said “A nation divided against itself cannot stand.”

This is not a Republican or Democrat issue anymore. The election is decided. It was a close election but it is over. It looks like Obama won both the popular vote by a narrow margin as well as having scored 303-332 electoral votes depending on the final call in Florida which Obama leads. Mitt Romney set the tone for healing tonight in a gracious and seemingly heartfelt concession speech emphasizing the need for Americans to come together and “put the people before the politics.” I couldn’t put it better myself.

3 responses to “Obama Wins….Now the Real Work of Healing the Wounds Must Begin”