Rejecting the “God” of Black Friday 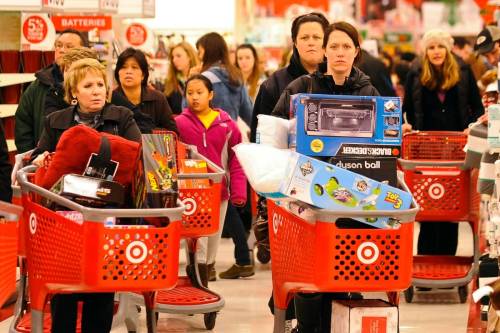 Yes my friends it is that most holy of occasions in American life, the annual celebration of Black Friday where others sane an rational people allow themselves to unleash their animal passions on the floors of our greatest retailers and on the internet.  We have observed the high holy day of Black Friday where Americans of all races and religious persuasions observe a day of sacrifice to the God of consumerism often spending days in preparation carefully hoarding their treasures in hopes of scoring the best deals at the nation’s leading retailers.

Today I can say that I have not even spent a penny on this Black Friday, not even online. I just can’t get into the whole mass psychology marketed by the retailers.  The thought of waiting hours just beat other people to buy some gadget made by salve laborers in China or some other despotic country is frightening. When one realizes that the retailers that cater to our greed not only profit off of slave labor, but also pay their workers low wages, offer few if any benefits for working obscene and often unpredictable hours to maximize their profits one has to wonder about the morality of it all. 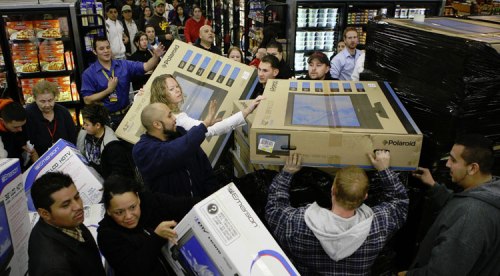 In the good news of the day, our local news reports that no one has yet been shot, knifed or trampled to death in any of our local retailers. However I can imagine that customer number 201 in line for the 200 available the $199 HDTVs Wal-Mart or other retailers with a limited numbers of Black Friday “door buster” specials is feeling homicidal or suicidal or possibly both about now.

But I hear that in some places the holiday has been celebrated with much more aplomb than our sleepy city.  I have read about shootings inside and outside of different retailers, incidents where shoppers had to be tasered by police, pepper sprayed by store security officers or even better pepper strayed each other. In one location a lady ran someone down in a mall parking lot, distracted driving appears to be the case. I guess she got a text from another retailer with an unannounced special across town. There is a case where a man kept people in line by pulling out a gun, at least someone is keeping order. I can only image how fun that was for them as they wrestled for all of those really “hot” deals.

I do think that this celebration says something about us now, while many people around the world would be willing to die for a decent meal or freedom of speech we are willing to harm our neighbors because they might be the fist to get the latest gadget for a few dollars less than us.  It seems perverted don’t you think? I can’t imagine Jesus or Thomas Jefferson approving such behavior but it is part and parcel of the culture that we are very much a part of and participate in and that means Tea Party and Occupy Wall Street types and everyone in between because whether we like to admit it we like our stuff and we want it for the best possible price, not that there is anything wrong with that…especially if you are a follower of Ayn Rand’s banal philosophy.

But when we let the urges for stuff overcome our common sense and any sense of decency, decorum or love of our neighbor then maybe we have lost our way.

I guess the fact that after Iraq I am claustrophobic and get panicky in big crowds in enclosed areas now makes me less inclined even to try to go to a major retailer today.  Maybe that makes it easy for me to say these things with relative impunity since the thought of going out in such crowds petrifies me. I certainly am not trying to be judgmental but when I see people doing harm to each other to obtain things that are more than luxuries for most of the world I think that we need to just step back and look at ourselves.

I mean really….We have massive long term unemployment, our country is financially and politically broken, we are facing a “Fiscal Cliff,”  we have troops at war in Afghanistan while the rest of the Middle East is about to go up in flames and bring us even more heartache. So with all that going on we have people fighting each other and some people actually doing physical harm to others for gadgets made in China or Third World countries by what amounts to slave labor. 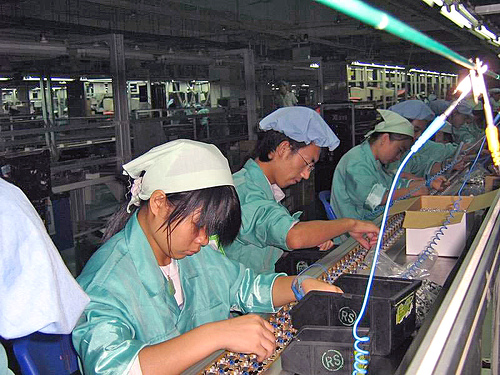 Even worse we have people in all levels of corporate America that promote this culture and make their living off of the people that are committing crimes to get a deal.  I think that says something about us and that troubles me.  But then I guess I don’t have enough faith in the God of Black Friday.

But why should I have faith in that God? The “God” of Black Friday caters to the darkest nature of self-centered greed and mocks the God who on the real Black Friday, offered himself for the life of the world. The “God” of this Black Friday is the no-God of Ayn Rand and her disciples who despise the crucified God in thought, word and deed. 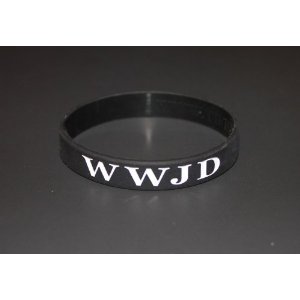 I wonder what Jesus would do if he stumbled into a Christian book store on Black Friday and found people fighting over a special on WWJD junk or the latest greatest “study Bible” featuring the notes of some prosperity preacher. I don’t think that he would be very happy.

One response to “Rejecting the “God” of Black Friday”