Seldom in military history are five brothers killed in action on the same ship or same unit in the same action on the same day. Many families have lost multiple children in military conflicts but they usually are spread out over time. In fact in all of my study I only know if one family that lost five sons in the same action on the same day. That family was the Sullivan family of Waterloo Iowa who lost their sons George, Francis “Frank”, Joseph, Madison “Matt” and Albert aboard the USS Juneau CLAA-52 when that ship was torpedoed and sunk on the morning of November 13th 1942 after being badly damaged at the Naval Battle of Guadalcanal.

The fact that all were lost aboard Juneau was in large part because the brothers refused to serve unless they served together, The two oldest brothers George and Frank had served in the Navy before the war and both had been discharged in May of 1941. When war broke out the older brothers with their three younger siblings Joe, Matt and Al volunteered to serve in the Navy but only if they could serve together. Though the Navy had a policy of separating siblings it was not always followed and the five brothers enlisted to serve together and were assigned to the new Anti-Aircraft Light Cruiser USS Juneau.

Juneau was an Atlanta Class Light Cruiser, actually designed as an anti-aircraft escort of the fast carrier task forces. Armed with 16 5” 38 caliber dual purpose guns and a large number of smaller anti-aircraft guns as well as 8 21” torpedo tubes as well as depth charge racks and projectors the class was an excellent escort ship, but woefully equipped to fight heavy fleet units in close surface actions.

Juneau and her sister Atlanta were part of Rear Admiral Daniel Callaghan’s Task Force 67.4 when it encountered a Japanese bombardment force comprised of the battleships Hiei and Kirishima Light Cruiser Nagara and 14 destroyers. Callahan’s Task Group was composed of the heavy cruisers USS San Francisco and USS Portland the light cruiser USS Helena the two Atlanta Class ships and 8 destroyers. In a confused and merciless night action the Japanese lost Hiei and two destroyers while the US Navy lost Atlanta and four destroyers. All the surviving US ships except the destroyer USS Fletcher incurred moderate to heavy damage. Among the ships suffering heavy damage was Juneau which suffered a torpedo hit which crippled her. The following day while returning to base Juneau suffered a torpedo hit from the Japanese submarine. I-26 which struck her her in the same spot as the hit from the night engagement. The Juneau exploded and sank in 20 seconds taking with her 600 of her crew of 700 men. Among those killed in the explosion were Frank, Matt and Joe Sullivan.

About 100 men survived the explosion including Al and George Sullivan. Unfortunately because the senior surviving US commander believed there to be no survivors and that his remaining ships could also be sunk by submarines these men were left at the surviving ships steamed away. Reports of possible survivors from a B-17 Bomber crew went unheeded for several days and it was not until 8 days after Juneau was sunk that 10 survivors were rescued by a PBY Catalina flying boat. By then the two remaining brothers had perished.

It was not until January 12th 1943 that the Sullivan family was notified of the loss of all of their sons. The Fletcher Class destroyer The Sullivans DD-537 was named after the brothers, she is now a museum ship in Buffalo New York. 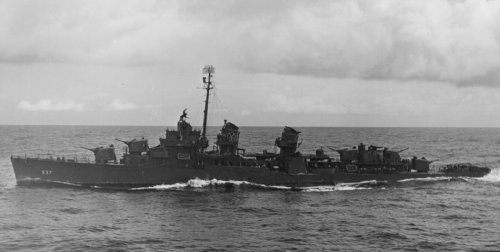 Her successor USS The Sullivans DDG-68 is a Arliegh Burke Class Aegis guided missile destroyer based out of Mayport Naval Station Florida. For many years they were the only ships named after more than one person in the US Navy, something that they now share with the USS Roosevelt DDG-80 named after President Franklin Roosevelt and Brigadier General Theodore Roosevelt Jr, a Medal of Honor winner on D-Day and son of President Theodore Roosevelt.

The loss of the five brothers prompted the War Department to end the assignment of siblings in the same unit and adopt the Sole Survivor Policy which became law in 1948.

Juneau was a good ship with a fine crew but unsuited for the type of battle that out of military necessity she was thrown into. Heavily damaged she had the unfortunate luck to be part of a battered task force which had no ships capable of anti-submarine protection because of damage incurred the previous night. Her sinking at the hands of the I-26 and the subsequent loss of her survivors through was a tragedy of the highest order.

Tonight I remember Juneau her gallant crew and the Sullivan brothers.

May they all rest in peace.