The Presence of Molly 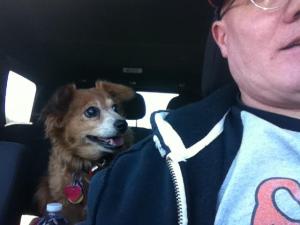 “Dogs are our link to paradise. They don’t know evil or jealousy or discontent. To sit with a dog on a hillside on a glorious afternoon is to be back in Eden, where doing nothing was not boring–it was peace.”  Milan Kundera

Molly Fur is still with me. Though we had to have her put down Monday I have felt her presence, especially as I drive too and from work. You see Molly was my constant companion and that wonderful furry baby spent innumerable hours traveling with me in North Carolina and on what seemed were our endless treks between Emerald Isle and Virginia Beach.

Molly loved riding with me and it did not matter how long or short the the trip was she had developed her own rituals for the rides. She would take a drink from her water dish before leaving the house, ensure that she had peed before hopping into the car and then take her place either in the front seat next to me of the back seat, centered so she could look over my shoulder. She was a comforting presence on those long trips and she savored every moment of them, especially when we would stop at a drive through for lunch and she would get her “Molly Burger.” When we got to our destination she was always happy, if coming home to Virginia she would joyfully run to Judy at the front door, and if heading back to Emerald Isle demand that I walk her to the beach, all the while hunting for deer.

I have never seen a dog savor life as much as Molly and thus I am not surprised that I still feel her presence in the car. Yesterday was funny because I thought I saw her shadow in the seat next to me and I reached over to pet her. She wasn’t there, but I could feel her spirit. That may sound weird to some of you, even religious people who believe in an afterlife, but somehow exclude everything but we contemptible human beings from it. I think that one of my favorite passages in the Bible is the one in Romans chapter eight which talks about the creation awaits its redemption, even groans for its redemption, and having heard Molly groan I know that this means dogs and other furry friends too. Personally I don’t give a flying fuck if any supposedly Christian leader condemns me as a heretic, for believing this.  But as Mark Twain said: “The dog is a gentleman; I hope to go to his heaven not man’s.”  Since I am already stoking the fires of Hell that according to some await me let me echo the words of Will Rogers who said “If there are no dogs in Heaven, then when I die I want to go where they went,”   even as I totally agree with the late curmudgeon Andy Rooney  who said “The average dog is a nicer person than the average person.”   I can feel the flames heating up, can’t you?

So, since I have already been condemned as a heretic to Hell even by some Christian “friends”  who have had the nerve to do so on social media, this matters not.  For I know that Molly is with me any time I get in my car. She is now like a guardian angel and I can feel her presence and frankly I would rather have her spiritual presence and the presence of my Papillon Pack of Minnie Scule and Izzy Bella around me than most people. A friend of mine noted that I have to start training up Izzy in “the way of the dog” not to replace Molly, but to be my next guardian angel. Thankfully, the little girl is already working on that.

So until tomorrow, thank you for all of your thoughts, prayers and love.

I wish you all the greatest love and joy possible.

6 responses to “The Presence of Molly”